Pieces From The Past - Final Wrap Up

WWII ended in 1945 and the German soldiers left Camp Trinidad in January 1946 ~ 75 years ago.  The most fortunate ones returned to their homes.  The less fortunate discovered that their home and family were no longer there, and the least fortunate were captured and held in Russian POW camps. In October 1946, the Army ordered an appraisal of the camp facilities. It was the opinion of the appraiser that none of the facilities, structures or buildings would be of much use at the current site. Rather, all of the material and equipment was very much needed in the vicinity and could be repurposed and put to use.

As told by Kurt Landsberger in his book Prisoners of War at Camp Trinidad, Colorado 1943 - 1946: Internment, Intimidation, Incompetence and Country Club Living:

It was necessary to move the structures and buildings on flatbed trailers, either as a whole or in sections. The buildings could also be taken down and removed as salvage.

There were two main groupings: The mechanical or installed equipment, such as light fixtures, switches, heating and ventilation equipment, and plumbing fixtures attached to the building; and the building materials, which included lumber, insulation board, doors and windows, and sheeting.

A complete physical inventory had to be made and then unit prices had to be obtained for a total value.

In June 1964 there was a five day event – Operation International Friendship - held in Trinidad. It was an opportunity for former German POWs that had been held at Camp Trinidad and US Officers and soldiers that worked at the camp to return to the remote (some stated desolate) location. A location that so many of them had come to love. (Below is a photo of some of the attendees - none of them had written letters to Phillip & Katie.  The quality is poor, but it is scanned from the newspaper - with great appreciation for my Mom and the Carnegie Public Library) 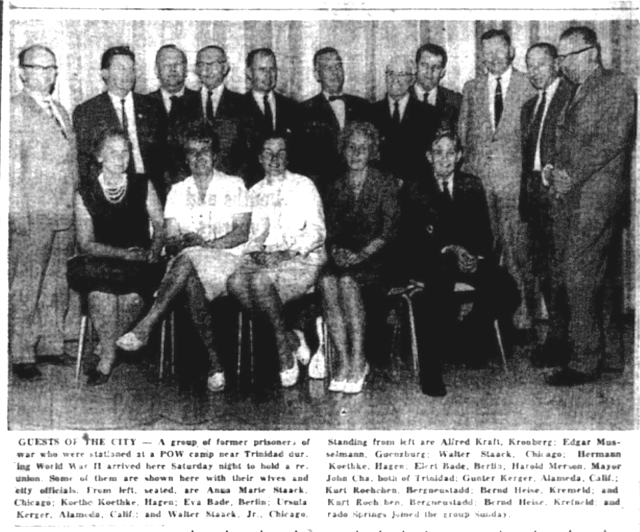 The POWs grew to love and appreciate the vast views of the landscape – The Sangre de Cristo Mountain range, the Spanish Peaks (Twin Peaks) and Fishers Peak, the flat butte that stood so prominently before the Camp. There were many art pieces that featured the landscape that had been on display at the Camp. At least one painting made its way to Phillip & Katie. But there were several letters that mentioned the gift of artwork that had been presented to them in appreciation for the kindness that had been shown to them while working in the sugar beet fields at the Schleich Farm.

Landsberger shared…  “Numerous letters by prisoners (to their loved ones) survive. From one: “I have never as a soldier been as well off as I am here; we are being treated very decently.” Another one compared the camp with a rest cure, the author being surprised by barracks with electric lights and individual cots complete with quilts. “The food is excellent and plentiful. Particular attention is given to the state of our health.” Yet his is the exact opposite of another letter written complaining about the lack of tables.

SIDE NOTE::  I wonder who made/provided the quilts that were on the beds???  How many were there?  Did each bed have a quilt?  And what did they look like???
It seems that most of the men grew to appreciate the facilities and the manner in which they were treated while at Camp Trinidad. But I am certain that their appreciation grew even more so upon their return to their war-torn homeland, as evidenced by what they wrote in their letters and their desire to return to America.

How interesting that it was the same year that pieces of Camp Trinidad were being redistributed and repurposed (1948) that my Grandparents, Phillip and Katie, began a new chapter of their lives as well with the purchase of a small farm between Trinidad and Model.

I am saddened that we have reached the end of this journey… a 15-month journey that took assorted pieces from the past – vintage quilt patterns, letters from former German POWs, family stories and recipes as well as lessons from history.  And with each piece we have had the opportunity to create a quilt that represents each facet and step of this journey.

From the introduction (The Signature Block) of my family to the first letters that were filled is gratitude on that they were back in their homeland (The Mayflower), to the sad news of families being unable to locate their family (The Lost Goslin')or simply being separated from them because of the various "zones" (The Flower Garden) and as the time passed, the news in the letters reflected complete despair, as in the letters with Double T, The Blockade and Pride of Ohio, yet repeatedly the men mentioned the kind treatment they had experienced while at Phillip & Katie Schleich's farm.

And let's not forget the numerous mentions of the delicious and generous amounts of food they were offered when they were at the Schleich Farm (Russian Sunflower)!  Or the recollections of Phillip's & Katie's family members as in the letter from Rudolf Salulke (Indian Star).

The most fascinating bit of historical information I learned of in my research was the information regarding C.A.R.E. Packages (Dragon Fly).  The most exciting "lead" that was stumbled upon by my translator was the information of Klaus Hesselbarth (Rolling Stone).  My favorite block to piece was Modern Broken Dish but the block that I am most pleased with in the quilt is the Friendship Block.  The most challenging blocks??? No doubt they were the Russian Sunflower and the Pine Burr Block!

This sew along has been a journey I have enjoyed making with you. And it is my hope that you enjoyed the journey as well.  If you happened to have missed the "journey" as it unfolded, you can find all of the letters, patterns, stories and recipes by clicking on the Pieces From The Past tab located at the top of the blog page.

Perhaps it has even inspired you to record the stories of your own family.  If you would be interested, I have compiled a document entitled "Priceless Conversations".  It, as well as all of the patterns from this sew along, are available on the products page of my Payhip "store". 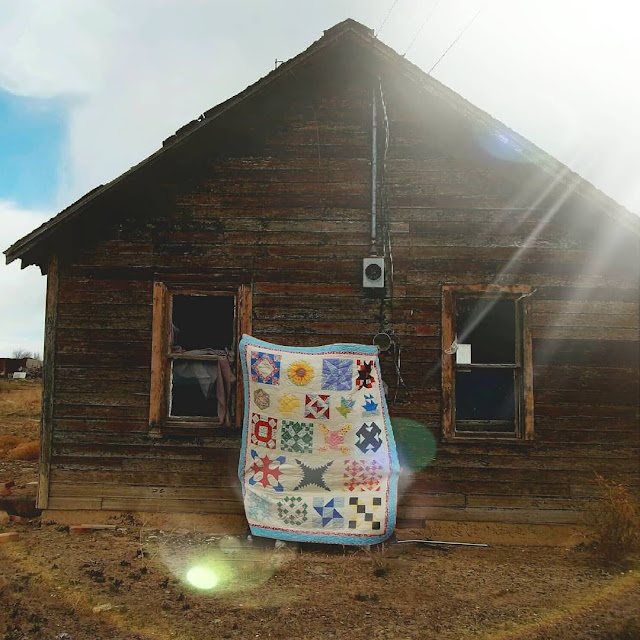 Last spring as the stay at home status was encouraged, my Mom and I (safely) ventured the 20 miles to Model, Colorado for a photo shoot with the quilt. 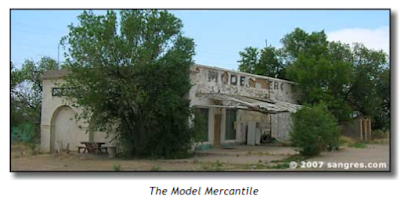 There isn't much left to see in Model.  There is an old Mercantile building that is standing, but is no longer in operation. 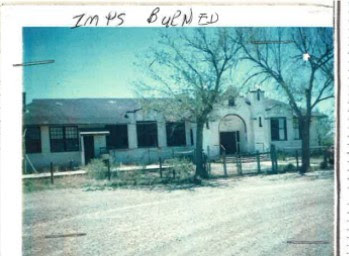 The school that my Dad  attended was lost in a fire and nothing really remains of it. 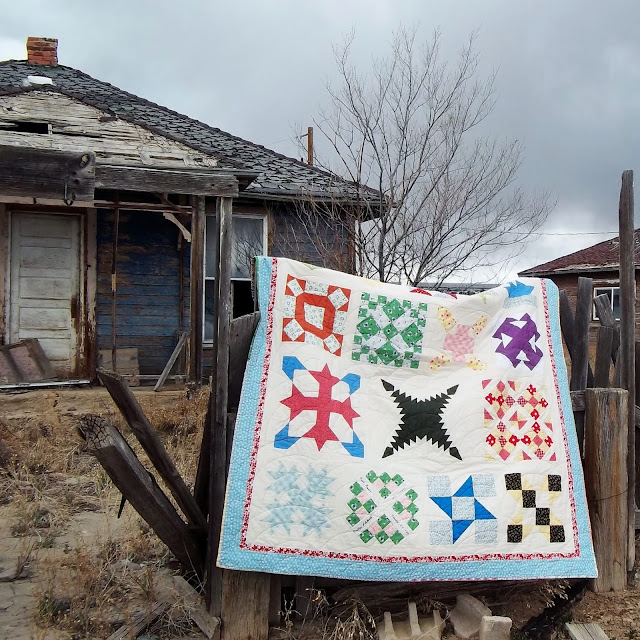 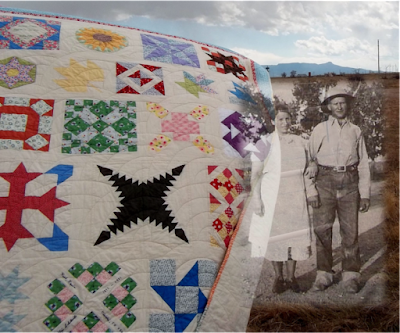 The home that Phillip and Katie and their boys lived in while farming in the area was torn down long ago.  It and any other identifiable landmarks had also been demolished so long ago that even my Dad, while he was alive and before dementia had set in, was unable to tell us where he lived.
I just felt right that the photos were taken there... in a sense, returning home. 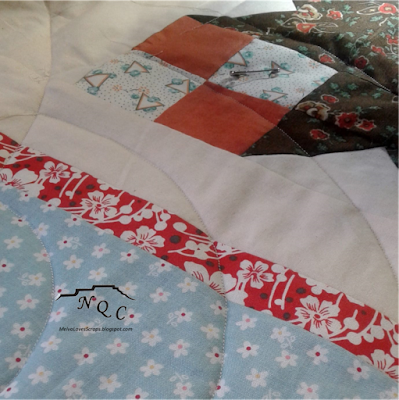 As I  considered various options for finishing the quilt I thought that it needed something that was reminiscent of the past, yet a tie to the present time as well.  It was for that reason that I selected a "Baptist Fan" design for the quilting but rather than having the quilting lines so close together as they would have been done traditionally, I chose to super-size them and make them 2-3/4" apart and the largest arc of the quilting as large as 10-1/2". 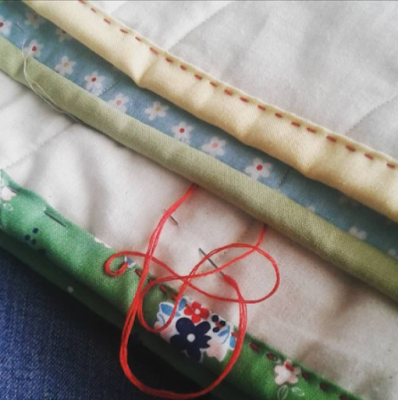 The binding is made up of left over fat quarters from the blocks, and stitched down with big stitches on the back.  Leaving a traditional, finished look to the front of the quilt and a modern look on the back.  That red thread really pops!

So, here are the final details you need for completing the borders... 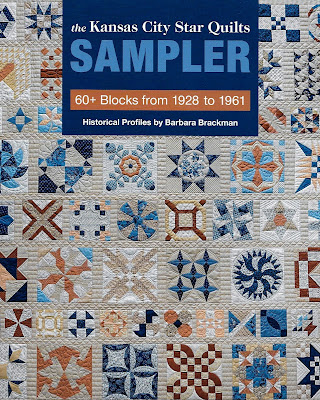 When your quilt (top only/flimsy) is complete share on instagram, tag me (@MelvaLovesScraps) and use hashtag #PiecesFromThePastSewAlong or post on my fb page - Melva Loves Scraps. And don't forget to link up for the give away!  C&T Publishing is generously giving five copies of the Kansas City Star Quilts Sampler to five individuals.  I can't wait to see your quilts!

But, before you run off... Tell me...
Leave a comment with your favorite block in the quilt.  And why it was your favorite.
Was there a story that was your favorite?  I'd like to hear from you about that as well.
Piece Happy!
Melva
Linking with:
Put Your Foot Down at For the Love of Geese
Needle & Thread Thursday at My Quilt Infatuation
BOMs Away at What A Hoot Quilts
Can I Get A Whoop Whoop at Confessions of a Fabric Addict
Off The Wall Friday with Nina Marie
Brag About Your Beauties at From Bolt to Beauty
Peacock Party at Wendy’s Quilts and More
Friday Foto Fun at Powered by Quilting
Finished or Not Friday at Alycia Quilts
Scrap Happy Saturday at Super Scrappy
Oh Scrap! at Quilting is More Fun Than Housework
Sunday Stash at QuiltPaintCreate
Patchwork & Quilts at The Quilting Patch
Monday Making at Love Laugh Quilt
Design Wall Monday at Small Quilts and Doll Quilts
Mid-week Makers at Quilt Fabrication
Wednesday Wait Loss at The Inquiring Quilter
Stitch Sew & Show at Life in the Scrap Patch
Posted by Melva at 12:00 AM