Pieces From The Past - Double T Block

Today's letter is a second plea for help... a follow-up of Klaus Hesselbarth's letter that was published with the The Rolling Stone Block (#13). 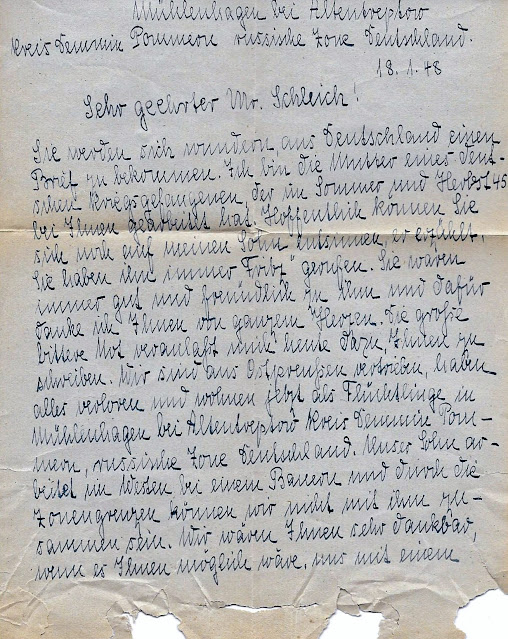 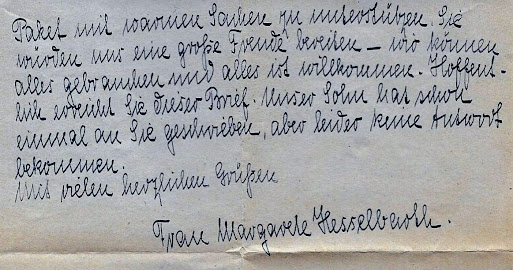 Jan. 18, 1948
Dear honored Mr. Schleich:
You will be surprised at receiving a letter from Germany.  I am the mother of one of the German POWs who worked for you in the Summer and Fall of 1945.  You would remember my son, he felt, since you always called him Fritz.  You were always good and kind to my son and for that I thank you with my whole heart.
Great need makes it necessary for me to write to you today.  We were driven out of East Prussia, have lost everything and now we live in Muhlenhagen in the Russian Zone of Germany.  My son works for a farmer in the West and because of the borders between the zones, we cannot be together with him.  We would be so grateful to you if it would be possible for you to supply us with a packet of warm things.  We need everything and anything would be welcome.  Hopefully this letter reaches you.  My son has already written to you, but unfortunately received no response.
With heartfelt regards,
Mrs. Margarete Hesselbarth
This mother's heartbreak and concern for her son is evident.  The request for "warm things" makes me wonder if she was requesting one of the CARE packages... 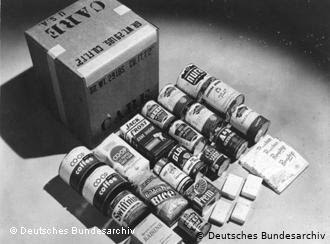 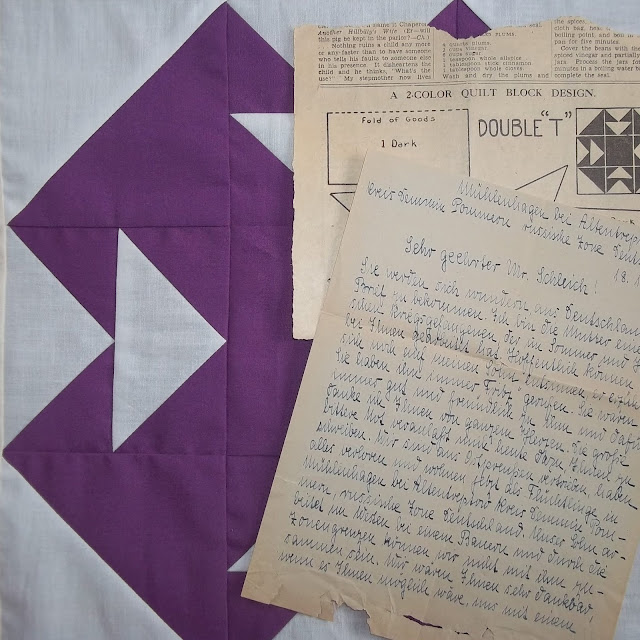 So, as we await a response from them let's focus on the Double T Block.  As I researched the history of this block there is some belief that the 'T' stood for Temperance, as explained here...
A "T" For Temperance or Teetotaler?
Women's Temperance Movement: Temperance Quilt
The word "temperance" implies use in moderation and indeed those who pledged temperance could still drink wine and beer. On the other hand a "teetotaler" forswore all alcohol.
There were stories told of the POWs making beer and wine while at Camp Trinidad.  After the discovery of the escape tunnel the American soldiers "entered the compound in full force and searched every nook and cranny."  They found stills for fermenting alcohol, a crude short-wave sending and receiving unit, a makeshift printing press with forged documents and other items that were considered illicit.
And let's not forget about the conversation that I shared with the Friendship Block when my Dad talked about his brother Leroy telling one of the guards to leave a prisoner alone stating, "I was the one who gave him that beer." 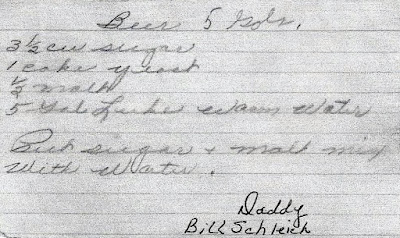 My cousin, Glenda, shared a recipe for homemade beer from her Dad.  When I showed it to Dave he was less than impressed since he and a friend made beer on a regular basis for several years.  Every step of the process took two hours and sampling and taste tests of other beer were required.  LOL!  🤣  Also, I'm not sure of the amount of malt required.  Hmmmm... 1/2 cup?  1/2 gallon?  It doesn't much matter... When I asked my cousins if they had any memory of beer making, the oldest of my cousins (Howard) stated "Yes. my dad and Bill made this type of beer. Horrible!!!!!"
Jump over to Payhip to download the free pattern now.  But before you go, tell me something...
I have some preliminary ideas for another Block of the Month/Sew Along featuring history of the Santa Fe Trail and an ancestor that made the journey multiple times in her life.
Would you prefer a 9-block BOM?
Or 12 blocks - continuing with the familiar timing of this sew along - a new block every three weeks?
Either way I would wrap it all up by the end of the year... Leave a comment with your input.
Don't forget to come back and link up for the opportunity to win a free fat quarter.  Be sure to use the hashtag #PiecesFromThePastSewAlong and tag me on IG - @MelvaLovesScraps or on fb at Melva Loves Scraps.  I love seeing all of your blocks!
Happy Piecing!
Melva
Linking with:
Put Your Foot Down at For the Love of Geese
Needle & Thread Thursday at My Quilt Infatuation
BOMs Away at What A Hoot Quilts
Can I Get A Whoop Whoop at Confessions of a Fabric Addict
Off The Wall Friday with Nina Marie
Brag About Your Beauties at From Bolt to Beauty
Peacock Party at Wendy’s Quilts and More
Friday Foto Fun at Powered by Quilting
Finished or Not Friday at Alycia Quilts
Patchwork & Quilts at The Quilting Patch
Monday Making at Love Laugh Quilt
Design Wall Monday at Small Quilts and Doll Quilts
Posted by Melva at 12:01 AM