Pieces From The Past - The Rolling Stone 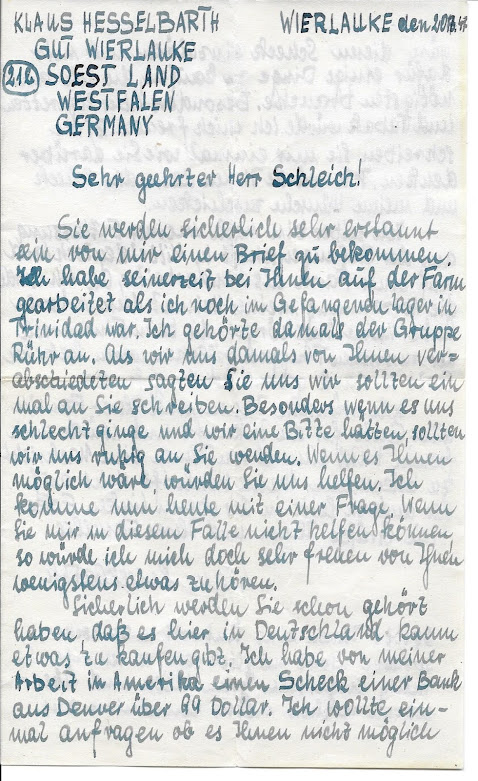 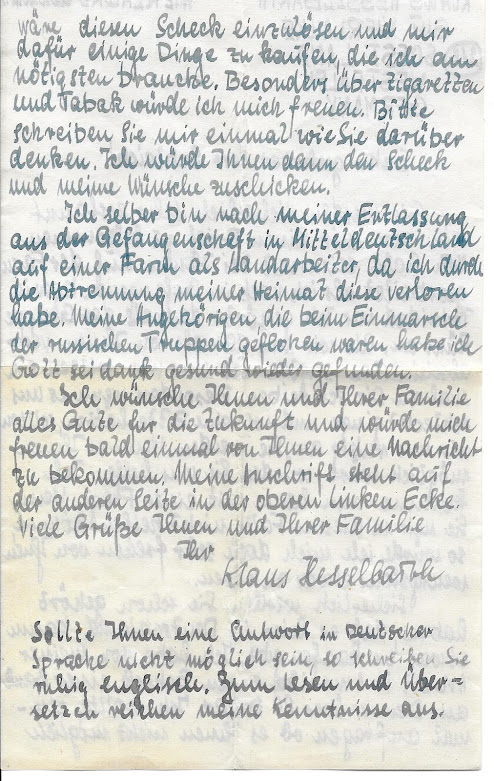 Klaus Hesselbarth
Gut Wierlauke
(21?) Soest Land
Westfalen
Germany
Dear honored Mr. Schleich!
You will surely be very surprised to receive a letter from me.  I worked at your farm when I was in the POW camp in Trinidad.  I belonged at that time to the Ruhr Group.  As we left and said goodbye to you, you told us to write to you sometime.  Especially if it went bad for us and we needed something, we should feel free to turn to you.  If it would be possible, you would help us.  I now come today with a question.  If you are unable to help me, I would really like to hear from you.
Certainly you would have heard that here in Germany there is hardly anything to buy.  I have a $99 dollar check from a bank in Denver for my work in America.  I want to ask if it is possible for you to cash the check and to buy for some things that are badly needed.  I would especially like some cigarettes and tobacco.  Please write me sometime and let me know what you think.  I would then send you my check and my wish list.
After my discharge as a prisoner, I have been in middle Germany working as a farm hand since I lost my homeland due to the partitioning.   Thank God I was able to find my relatives, who had to flee from the incoming Russian troops.
I wish you and your family everything good for the future I would be pleased to hear from you.  My address is on the other side of the paper in the upper left corner.  Best regards to you and your family.
Yours,
Klaus Hesselbarth
If it is not possible to answer in German, send it in English.  I have enough knowledge for reading and translating.
This letter was one of the last letters to be translated and I was quite excited to have a message from my translator, Amy... well here's what she had to say...
As I translate each letter, I've been googling the name just in case I find something.  Well I finally did find something:  an article from 2009 written in a German magazine about the flight out of East Prussia.  Like he says in the letter, his family had to flee the  Russians and the area was annexed.  The article says that Klaus was not with his family when they fled because he was in a POW Camp.  It says after the war he studied agriculture, he met his wife in his place of work, and he was able to reunite with his family in the Family Reunification Program.  The farmer he was working for told him that if he didn't mind having everyone in his one room, then he should go ahead and bring his parents over.  His oldest son was born on the teaching farm, where he took his training.  He would later become director of a research institute for livestock farming.  Even though he wasn't there for the flight out of East Prussia, he has a lot of artifacts and is in contact with lots of survivors and is dedicated to keeping the knowledge of the event alive and to pass that knowledge on to future generations. 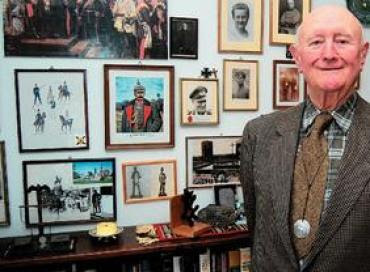 If you happen to be interested, like I was, here is the link to Klaus' entire story.  The picture of Klaus reveals that he was quite proud of his collection as well as his efforts of keeping the story of his parents and many others fleeing their homeland for safety.
Oh, how I wish I could contact Klaus' children!  Oh, and to read the memories of Klaus' father, Walter... "If my report is such that my son and his children see through what a hard time we have gone, the purpose of my story is fulfilled."
I have reached out to the magazine editors, with no response, as well as an individual on social media that I suspect is a descendant, again with out any response.
I wonder... Did Mr. Hesselbarth ever get his check for $99 cashed?  Does it remain in his collection of artifacts?  This inquiring mind wants to know. 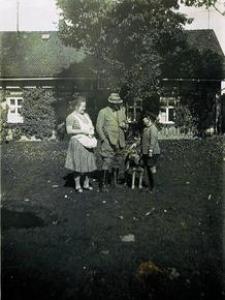 A photo from Walter with a young Klaus...  Sorquinces - Walter Hesselbarth was the manager of the Count's Sorquitten (Polish: Sorkwity). He had accepted the post on the condition "that I get a free hand", as he had explained to the then owner - Baron Bernhard von Paleske. “The estate had around 5000 hectares of usable agricultural area,” recalls Klaus Hesselbarth. The village of Sorquitten was founded in 1379. The estate was a former fiefdom of the Teutonic Order and changed hands several times over the centuries. Today's castle is located in the former Sensburg district on a headland between two lakes in a landscape park that is now a natural monument. In the course of time seven outworks belonged to the estate. In the Sorquitter Gutsforst with particularly dense pine and spruce stands, there was a good population of game. Sorquitten was famous for its deer hunts. After the war, the castle was used as a family vacation home for the “Ursus” tractor works under Polish sovereignty. Later it was a castle hotel that has since closed again. –
If you have any suggestions or ideas of how to locate/find or contact the Hesselbarth family, I welcome them...
I will leave no stone un-turned.
Block #13 is called The Rolling Stone... (see what I did there?😉) 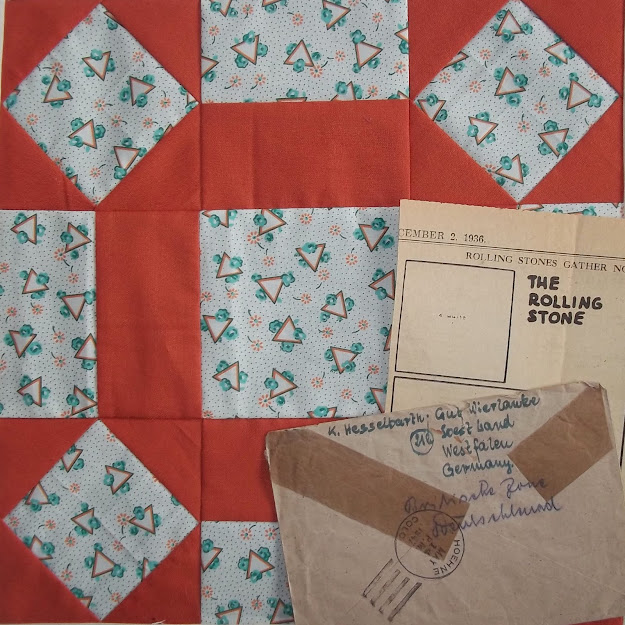 It is an easy block that should come together quickly for you... four Square in a square blocks and some strip piecing and you will find yourself ready to link up for an opportunity to win a free fat-quarter!  Don't forget to tag me in your photos - instagram, @MelvaLovesScraps and use the hashtag #piecesfromthepastsewalong or share over on my facebook page, Melva Loves Scraps.
Quilt Happy!
Melva
Linking with:
Mid-week Makers at Quilt Fabrication
Wednesday Wait Loss at The Inquiring Quilter
Put Your Foot Down at For the Love of Geese
Needle & Thread Thursday at My Quilt Infatuation
Creative Compulsions at Bijou Bead Boutique
Can I Get A Whoop Whoop at Confessions of a Fabric Addict
Off The Wall Friday with Nina Marie
Brag About Your Beauties at From Bolt to Beauty
Peacock Party at Wendy’s Quilts and More
Friday Foto Fun at Powered by Quilting
Finished or Not Friday at Alycia Quilts
Oh Scrap! at Quilting is More Fun Than Housework
Sunday Stash at QuiltPaintCreate
Patchwork & Quilts at The Quilting Patch
UFO Busting at Tish’s Wonderland
What I Made Monday at Pretty Piney
Monday Making at Love Laugh Quilt
Design Wall Monday at Small Quilts and Doll Quilts
BOMS Away at Katie Mae Quilts
Colour & Inspiration at Clever Chameleon Quilting
Posted by Melva at 12:00 AM