Pieces From The Past - The Lost Goslin'

World War Two officially came to an end on September 2, 1945, following the signing of the surrender documents by the Japanese emperor. The Japanese surrender became official in early August 1945. Following the death of Adolf Hitler, German forces surrendered on April 29, 1945.  Camp Trinidad closed in January 1946 and the German officers traveled to San Francisco to make their trip home. 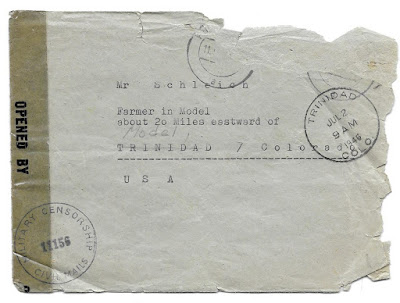 Hans Worthmuller was the first of the men that worked for my Grandpa, Phillip, to write.  His letter, dated May 6, 1946 took two months to arrive... Postmarked July 2, 1946 in Trinidad.  You'll notice that it had been opened for censorship...

His return seemed to be a pleasant one since he easily located his wife and young son and had news of his older son and the anticipation of his release from the POW camp he was held in in Italy. 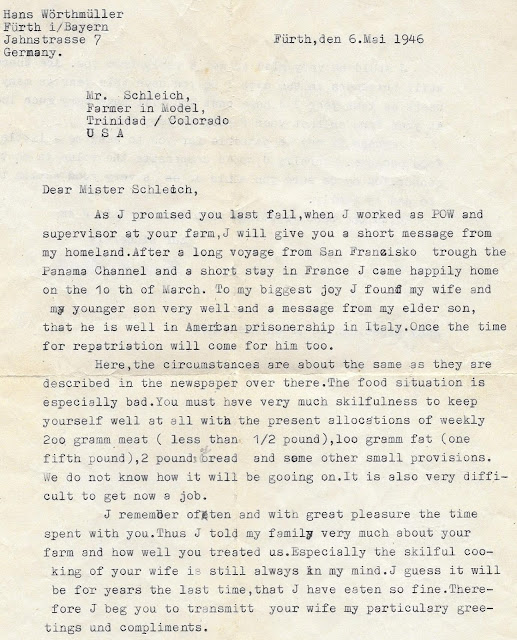 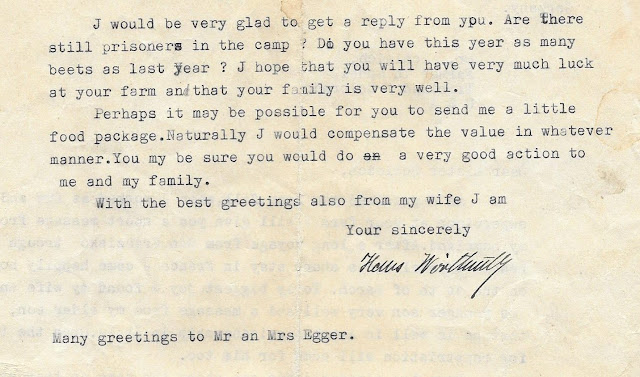 He wrote of the rations and small amounts of food.  A 1/2 pound of meat for a week?!?  I cannot, nor do I want to, imagine how difficult it was to survive on the small portions. 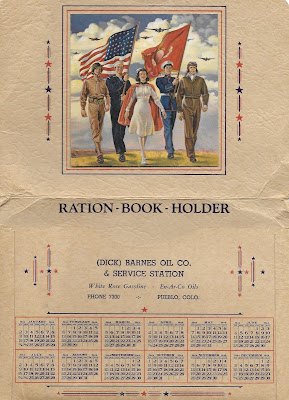 The US Government's persuasion of people to give up large amounts of red meats and fats actually resulted in healthier eating.  However... 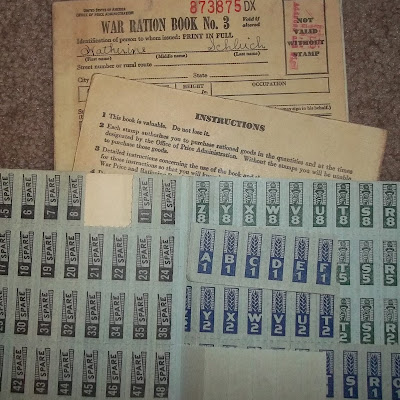 Sadly, there were the food manufacturers who took advantage of the wartime shortages to flaunt their patriotism to their profit. The familiar blue box of Kraft Macaroni and Cheese Dinner gained great popularity as a substitute for meat and dairy products. Two boxes required only one rationing coupon, which resulted in 80 million boxes sold in 1943. Food substitutions became evident with real butter being replaced with Oleo margarine. Cottage cheese took on a new significance as a substitute for meat, with sales exploding from 110 million pounds in 1930 to 500 million pounds in 1944.

After three years of rationing, World War II came to a welcome end. Rationing, however, did not end until 1946. Life resumed as normal and the consumption of meat, butter, and sugar inevitably rose.

Keep in mind that while Phillip and Katie had the POW workers at the farm the rationing restrictions were in place.  How did they feed, not only their family  including three hungry boys, their daughter, son-in-law and grandson, but also the "boys" from the camp?  They had a large garden that I imagine all of the veggies came from.  Grandma was an excellent cook... Hans fondly recalled "her skillful cooking" in his letter.

One of my older cousins (the 3rd grandchild of Phillip & Katie, and first grand-daughter) recently shared her memory...

"Eating lunch or dinner was like going to the Golden Buffet! She made a least 3 meats,4-5 vegetable dishes including many different jello recipes. Dessert was pies, cakes, cookies, and more. But you must know this was served after us kids had been with Grandpa at the gas station where we (us kids) had a few treats!! We usually had a Nehi pop of orange or grape or whatever we wanted along with circus peanuts, orange slices, or/and a candy bar. Then, we went back to their house and were expected to eat a large plate of food. Needless to say--- I couldn't eat very much."

Here is one of Katie's recipes...

Cover with a plate and leave on the counter for 2-3 days. Test a small bite for taste and texture. When to your desire, place in jars or containers and store in the refrigerator.

They are crispy and so good.  One particular summer when my Dad had an excess of cucumbers I was making a crock of pickles on a weekly basis. And the girls were munching on them as snacks in the middle of a hot afternoon.  SO. GOOD!  FYI, these are not the typical cucumbers that you find in produce department.  Well, they are, but just much smaller... about 4-5 inches long and they will feel kinda pokey, but the pokey things brush off when you wash them.

While Hans recalled the fond memories of what could have been a horrible experience as a POW, he waited for the return of his son... the Lost Goslin'. 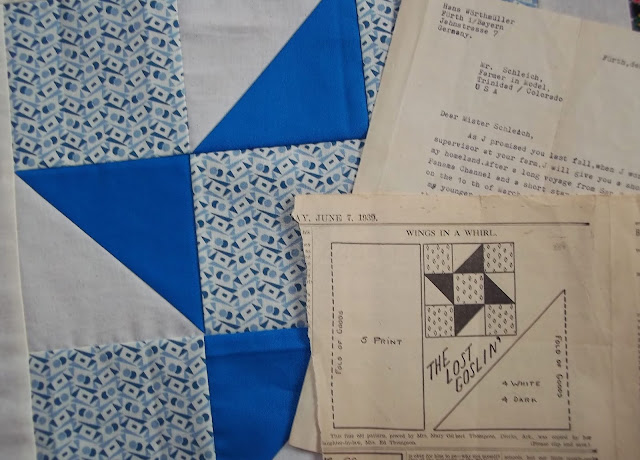 It is a simple pattern that will come together quickly for you...  Go grab the pattern at payhip.


Pickles... some people love 'em.  Some people not so much.  And the variety available!  Dill, sweet, bread and butter... and now'adays, even deep fried!

Just last week I saw a post about a dill pickle pizza... now I LOVE dill pickles... and I LOVE pizza... but together??? My first thought was "that sounds gross", but then I read about it...  It doesn't have a traditional red sauce.  Rather, it has a garlic dill white sauce,  Canadian bacon, mozzarella and sliced dill pickles... Hmmm... "I may try it, just because I'm curious."  lol!  I was a skeptic about deep fried pickles at one time too.

What are your favorite pickles?
Have you ever had fresh crock pickles?

Oh, and don't forget to come back to link up your Lost Goslin' block... open through March 4th.