Pieces From The Past - Modern Broken Dish 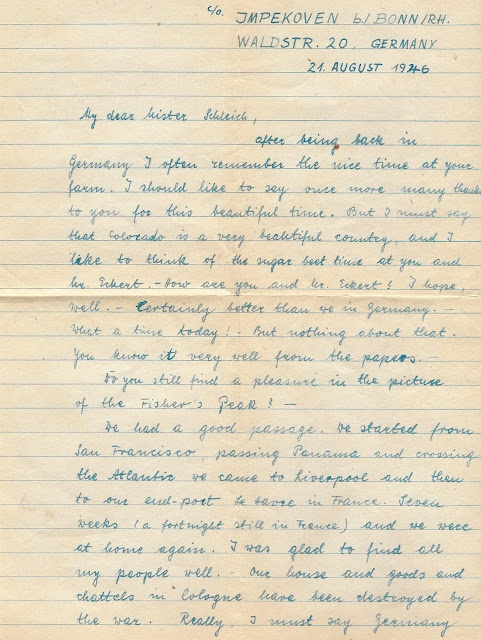 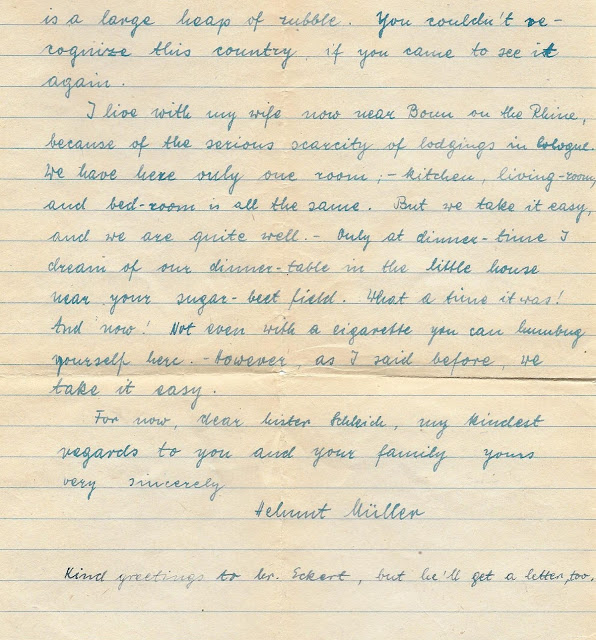 Another letter written in English, but I have typed it out for your reading pleasure so that you don't have to decipher the hand writing.

After being back in Germany I often remember the nice time at your farm.  I should like to say once more many thanks to you for this beautiful time.  But I must say that Colorado is a very beautiful country and I like to think of the sugar beet time at you and Mr. Eckert’s.  How are you and Mr. Eckert?  I hope well.  Certainly better than we in Germany.  What a time today!  But nothing about that.  You know it very well from the papers.

Do you still find a pleasure in the picture of the Fishers Peak?

We had a good passage.  We started from San Francisco, passing Panama and crossing the Atlantic we came to Liverpool and then to our end-port Le Havre in France.  Seven weeks (a fortnight still in France) and we were at home again.  I was glad to find all my people well.  Our house and goods and chattels in Cologne have been destroyed by the war.  Really, I must say Germany is a large heap of rubble.  You couldn’t recognize this country if you came to see it again.

I live with my wife now near Bonn on the Rhine, because of the serious scarcity of lodgings in Cologne.  We have here only one room – kitchen, living room and bedroom in all the same.  But we take it easy and we are quite well.  Only at dinner time I dream of our dinner table in this little house near your sugar beet field.  What a time it was!  And now!  Not even with a cigarette you can humbug yourself here.  However, as I said before, we take it easy.

For now, dear Mister Schleich, my kindest regards to you and your family.

Kind greetings to Mr. Eckert, but he’ll get a letter too. 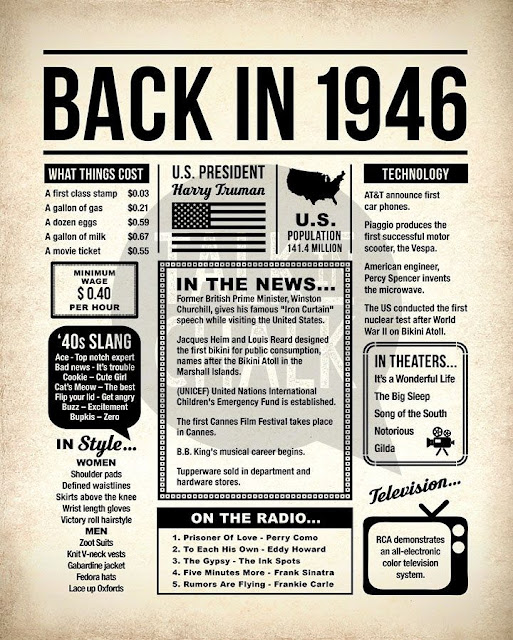 As I searched world headlines of August, 1946 I found that the trials for war crimes were in the beginning stages.  I also found this photo from the German Federal Archives. 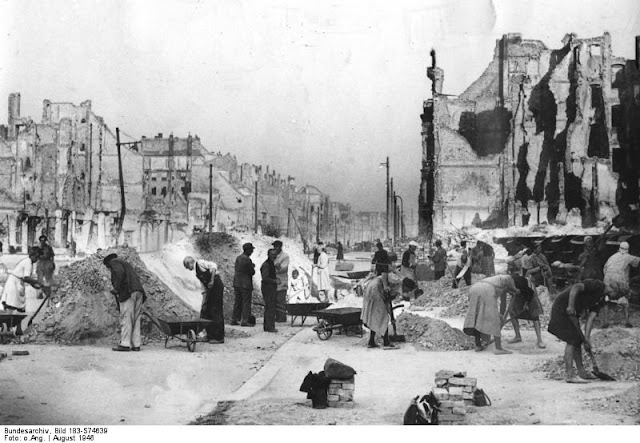 It breaks my heart, gives me chills, and brings tears to my eyes to actually SEE the conditions of Berlin.  I have read these letters over and over and with each one, to date, I realize now that I did not have a realistic "picture in my mind" of the conditions the men wrote about... I am sure that this was one of the very worst areas of the city and in true news media style the very worst conditions are presented.

I am guessing that the men and women in the photo above had worked or lived in the buildings shown, and like homeowners and business owners do following a tornado or flood, they returned to try to find any personal items that they could salvage.  But, more than likely, they were actually getting paid to assist with the clean up.

Nothing left: In 1939, Germany had some 16 million flats, but by the end of the war 2.5 million had been destroyed, and another 4 million were uninhabitable, according to Der Spiegel. " You can view and read much more over at The Daily Mail.

I have a much clearer understanding why the men that wrote mention the "dinner table in this little house near your sugar beet field" and their desire to return to it.

Müller wrote, " You couldn’t recognize this country if you came to see it again."  Well, in actuality, Phillip and Katie, while of German descent, never lived in Germany, they only passed through Bremen on their journey to the US as children. (You can get the full details of this over on the announcement for this Sew Along.)

Mr. Müller's mention of the picture of Fishers Peak makes my heart sad as well...  The prisoners had gotten together and presented Phillip and Katie with a painting (perhaps acrylic) on a piece of glass.  After my Grandmother's passing in 1961 and the remarriage of Grandpa less than a year later, this painting at some point had been placed in the care of my parents.  For whatever reason it was not in a frame and had been stored in an attic crawlspace area off of my brother's bedroom where it got cracked.  It wasn't shattered, but none the less, because it was cracked, it was tossed, because it is just not safe to have broken glass in an area where children play...

However, thanks to a local art museum, the Denver Public Library and Alan Prendergrast (author of the WestWord article) I share these two pieces of artwork. 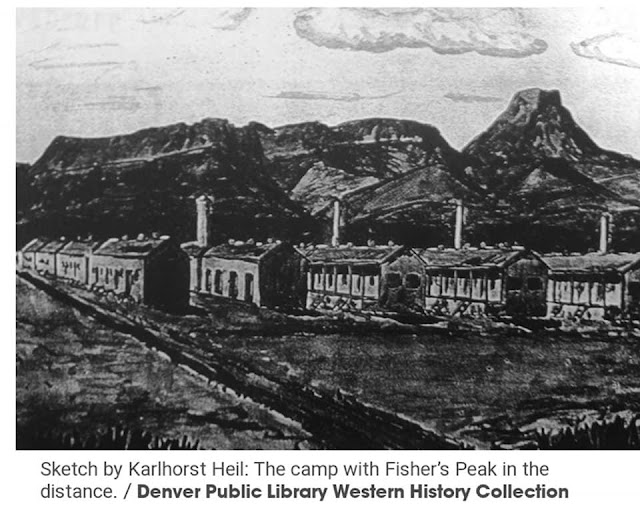 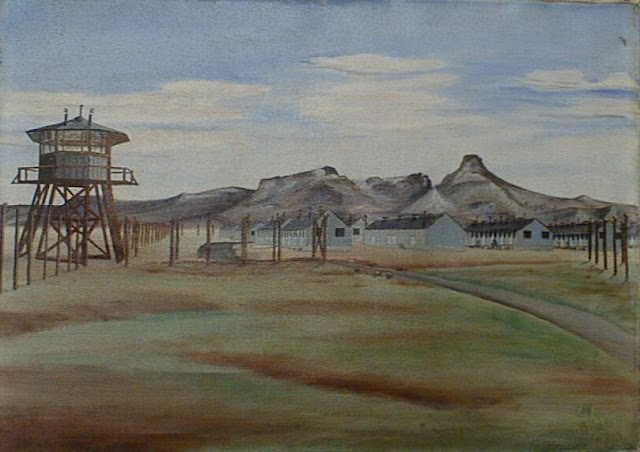 This pastel is from the A.R. Mitchell Museum of Western Art
Artist Unknown

What a kind gesture on the part of the prisoners.  A gift so that my Grandparents would remember the men, men that had been treated as friends, that worked on their farm for the short time that they were at Camp Trinidad.  Leaving them with the gift of the painting was a way for the prisoners to show their gratitude for the kind treatment they received at the Schleich Farm.

I have mentioned before that it saddens me to think that not all of the local farmers were as kind to these men... these men that were a part of an army lead by a man who had a superior opinion of his race and who mistreated so many.

... perhaps it was simply a language barrier between the prisoners/field workers and the other farmers... or perhaps they were simply "farm hands" and not necessarily mistreated, but not treated and openly welcomed as friends.

My Grandparents, while they did not have a lot to share, shared freely with them when they were at the farm, with no judgement of their political affiliation or nationality.  So in an attempt of repayment for the kindness extended to them, the prisoners would work with an extra effort and when given an opportunity to have a break, the men would shorten their breaks voluntarily to weed the family garden... despite being told that it wasn't necessary, they continued weeding.  Thus, the deep appreciation shown by the men to my Grandparents with the painting of Fishers Peak...

The fact that it ended up broken led me to choose the Modern Broken Dish block as the next block. 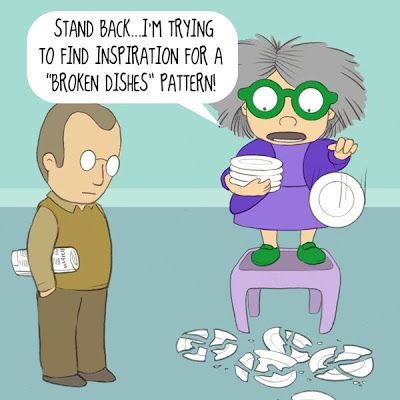 The pattern looks quite easy... a simple 9-patch makes up the centers of each quadrant.  It took me (and a few pattern testers)  several attempts at getting the placement of the white "frame" sewn into the proper position.

I think one tester may have felt like Mrs. Bobbins wanting to toss something in frustration... ooops!  Sorry!

A few adjustments were made to the pattern and the final tester had success on her first try!


All I can say is read and follow the instructions very closely! 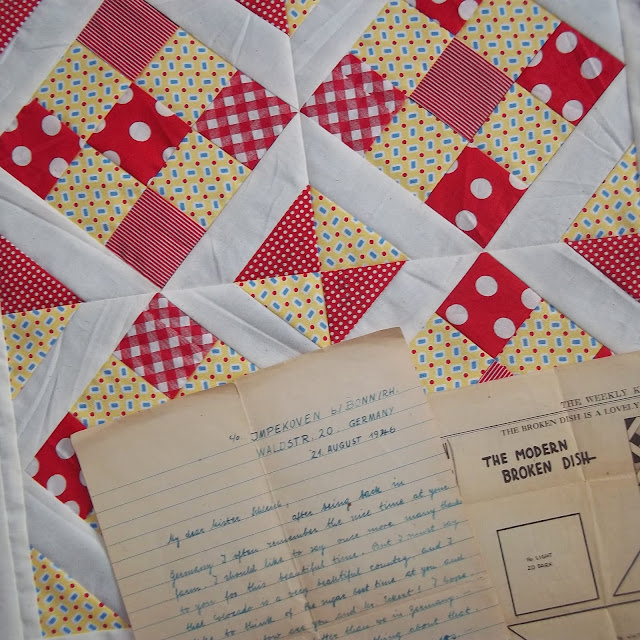 So go grab your pattern and gather up some cheery and happy looking fabric and piece your block and remember to come back when your block is finished and link up for the fat quarter give away.  If you face any challenges with the link up please email a picture of your block to me at MelvaLovesScraps@NolanQualityCustoms.com and I can take care of it.

You can also share a photo on instagram (be sure to tag me - @MelvaLovesScraps and use the hashtag #piecesfromthepastsewalong) or on facebook.  I have so enjoyed seeing all of the pictures of the blocks, the variety of colors and fabric choices.  I look forward to seeing all of the finished quilts... we are 1/3 of the way through the sew along.

Here is a collection of the blocks that have been linked up or that I have seen on social media...


I think most of us can relate to the disappointment of a special dish that gets chipped or broken.

When this happens, are you someone who will try to repair the dish, or continue using the dish despite a small chip?  Or in some cases "re-purpose" the dish for a new use?

I have been known to repair a number of pieces, most of vintage or antique age that have a special meaning to me.  Like a hand-painted china cup (painted by my Grandma Teegarden) that had been given to my mother-in-law and has a crack in it... It is no longer used to drink coffee or tea... it is a pen holder because I just could not part with it.

I think I can honestly say that I get this from my Mom and she even told me recently that she regrets not trying to save the painting of Fishers Peak.  But that is all water under the bridge...

I have been working on getting more patterns written up and have new ones ready for testing.  Interested in helping me out?  Leave a comment (be sure that I have a way to reply back - no reply comments are a dead end for me - or email me to let me know of your interest.