Pieces From The Past - The Blockade 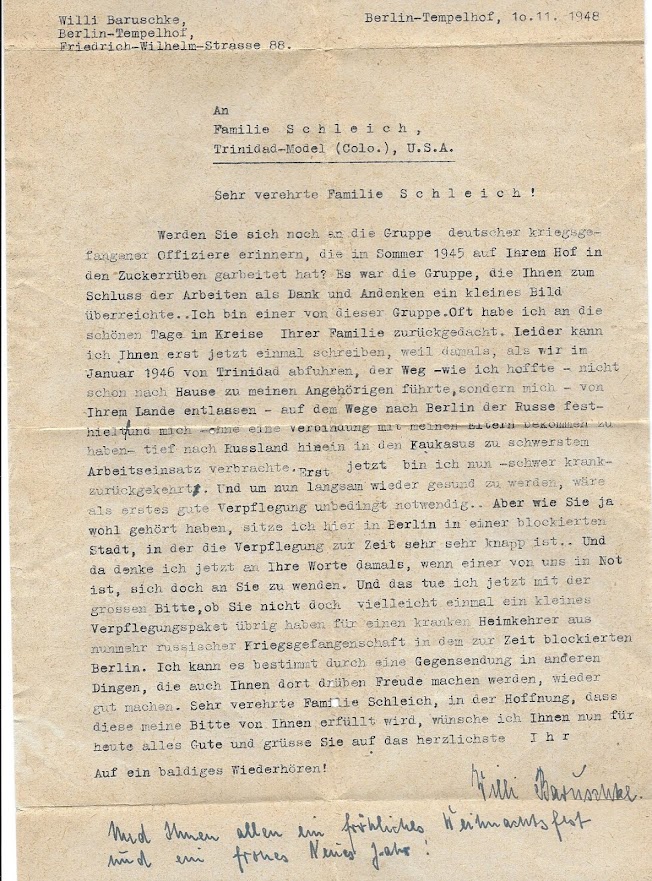 Willi Baruschke Berlin-Tempelhof Nov 10, 1948
Berlin-Tempelhof
Friedrick-Wilhelm Street 88
To: Schleich Family
Trinidad-Model (Colorado) USA
Very honored Schleich family:
Can you remember the group of German POW officers, who in the summer of 1945 worked on your sugar beet farm?  It was the group who, at the end of the work, presented you a small picture as a Thank You and a memento.  I am one of that group.
I have often thought back to the lovely days spent in your family circle.  Unfortunately, only just now am I able to write to you, because then, as we left Trinidad in January 1946, the journey did not lead, as I hoped, to my home and family, but rather on the road to Russian-held Berlin and then deep into Russia in the Caucasus to the toughest work camp.  Only now have I come back, very sick.  And as for being able to recover my health, the first need is good food.  But as you have well heard, I am sitting here in Berlin, a blockaded city, in which rations at this time are very, very scarce.
Then I think back to your words back then, if any of us is in need, that we should contact you.  And that is what I am doing now, with the big request of if you can perhaps spare a small care package for a sick survivor of a Russian POW camp now in blockaded Berlin.  I can pay you back by sending you other things by return package that would please you over there.  Very honored Schleich family, in the hopes that this request is met, I wish you all the best and send you my warmest regards, your Willi Baruschke.
Hope to hear from you soon.
Willi Baruschke
handwritten ~ And to you all a Merry Christmas and Happy New Year. 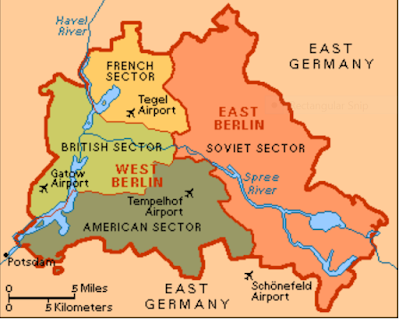 From History.com - "Following World War II, Germany was divided into occupation zones. The United States, Great Britain, the Soviet Union, and, eventually, France, were given specific zones to occupy in which they were to accept the surrender of Nazi forces and restore order. The Soviet Union occupied most of eastern Germany, while the other Allied nations occupied western Germany. 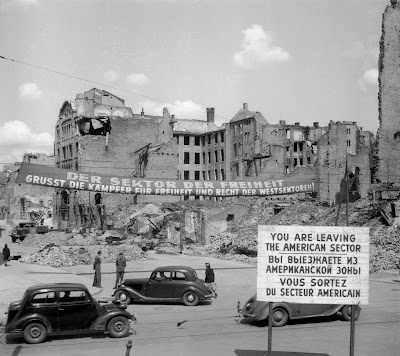 The German capital of Berlin was similarly divided into four zones of occupation. Almost immediately, differences between the United States and the Soviet Union surfaced. The Soviets sought huge reparations from Germany in the form of money, industrial equipment, and resources. The Russians also made it clear that they desired a neutral and disarmed Germany."

With this letter from Mr. Baruschke, we hear again of an unfortunate German soldier who only wanted to return home, yet fell into the poor conditions of a POW camp controlled by the Russians and released only because of his failing health.
"On June 22, 1948, negotiations between the Soviets, Americans, and British broke down. On June 24, Soviet forces blocked the roads and railroad lines into West Berlin."
"For a few tense days, the world waited to see whether the United States and Soviet Union would come to blows. In West Berlin, panic began to set in as its population worried about shortages of food, water, and medical aid. The United States response came just two days after the Soviets began their blockade. A massive airlift of supplies into West Berlin was undertaken...  Russia looked like an international bully that was trying to starve men, women, and children into submission...  On May 12, 1949, the Soviets officially ended the blockade." 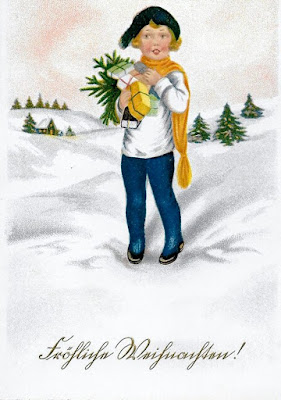 Willi Baruschke included two sweet postcards, probably for the boys, but possibly as a small "down payment" of his promise to "return packages that would please you". 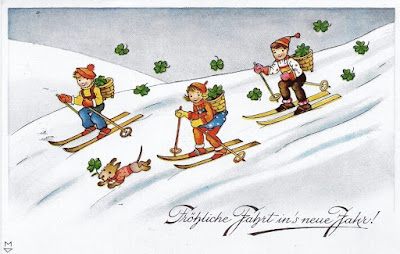 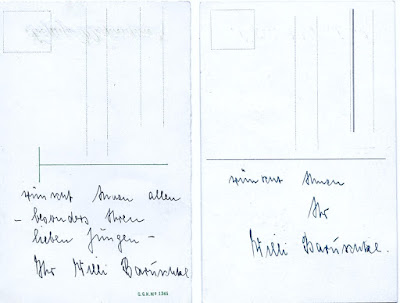 Handwritten on the back of each card were well wishes to the family. 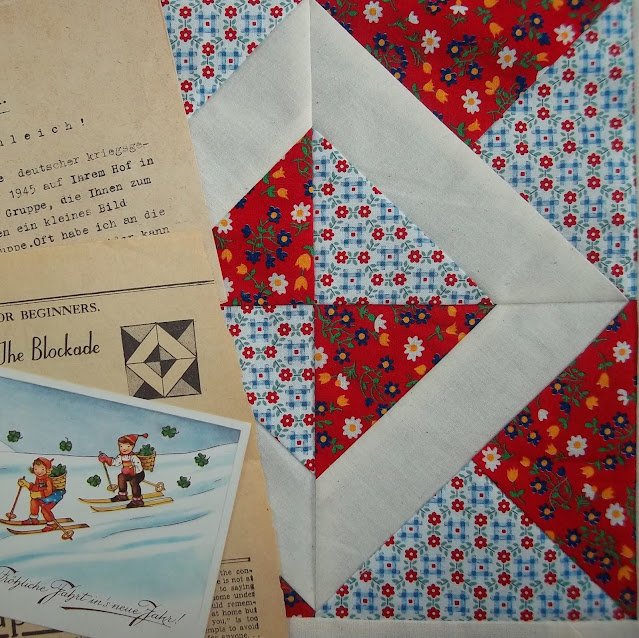 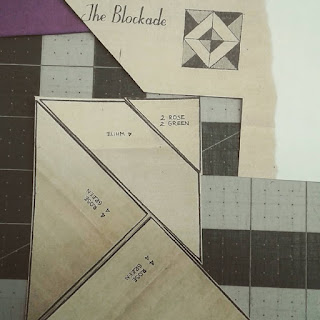 Because of the Russian Blockade told of in the letter, this beginner block, The Blockade, is the pattern I selected to accompany this story.  I had a bit of a challenge in writing the pattern for this block since the printed templates included mis-sized pieces.  Errors happen, I get that.  But I cannot help but wonder how many "beginner quilters" got frustrated with this pattern in 1938?
Rest assured, the final pattern has been tested by myself several times, as well as a few pattern testers that have been a joy to work with.
Now is the time to download the pattern for free - link is above (highlighted name).  Don't forget to come back when your block is complete to link up for the opportunity to win a free fat quarter.  Be sure to use the hashtag #PiecesFromThePastSewAlong and tag me on IG - @MelvaLovesScraps or on fb at Melva Loves Scraps.  I love seeing all of your blocks! 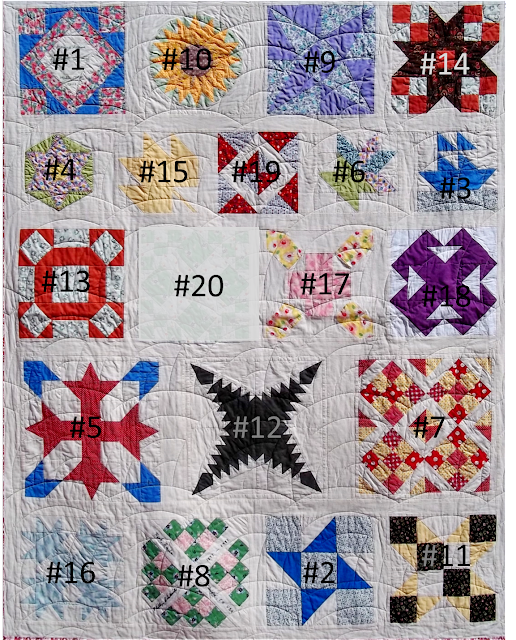 With the completion of this block, you can assemble row #2.  You will need four 2-3/4" x 9-1/2" sashing strips to be sewn into place between the blocks.  You can also add a sashing strip 2-1/2" x 54" to the bottom of the row, and join row 2 to row 1.  Oooooooooh!  We are getting SO close!  Just one block left!  I can feel the excitement... Can YOU?
Now, before you run off, leave a comment telling me...
What was a stand out item in this letter?
Piece Happy!
Melva
Linking with:
Put Your Foot Down at For the Love of Geese
Needle & Thread Thursday at My Quilt Infatuation
Can I Get A Whoop Whoop at Confessions of a Fabric Addict
Off The Wall Friday with Nina Marie
Brag About Your Beauties at From Bolt to Beauty
Peacock Party at Wendy’s Quilts and More
Friday Foto Fun at Powered by Quilting
Finished or Not Friday at Alycia Quilts
Scrap Happy Saturday at Super Scrappy
UFO Busting at Tish’s Wonderland
BOMS Away at Katie Mae Quilts
Oh Scrap! at Quilting is More Fun Than Housework
Sunday Stash at QuiltPaintCreate
Patchwork & Quilts at The Quilting Patch
Monday Making at Love Laugh Quilt
Design Wall Monday at Small Quilts and Doll Quilts
Colour & Inspiration at Clever Chameleon Quilting
To Do Tuesday at Home Sewn By Us
Mid-week Makers at Quilt Fabrication
Wednesday Wait Loss at The Inquiring Quilter
Stitch Sew & Show at Life in the Scrap Patch
Posted by Melva at 12:00 AM