Pieces From the Past - Signature Block 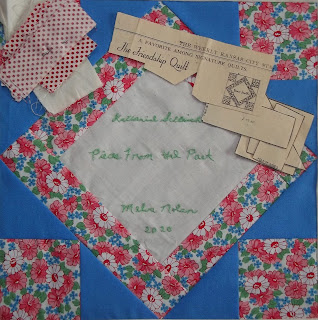 The Signature block is one of the first Kansas City Start blocks that I ever made.  I had recently started quilting and pulled out the collection of patterns and fabric that had been Grandma Schleich's.  Among them I found 15 pieced blocks with embroidered signatures on them (shown below).  But there wasn't a block that featured my Grandma's name.

There were several pre-cut pieces that were saved with the pattern (shown in the upper left corner of the picture to the left... 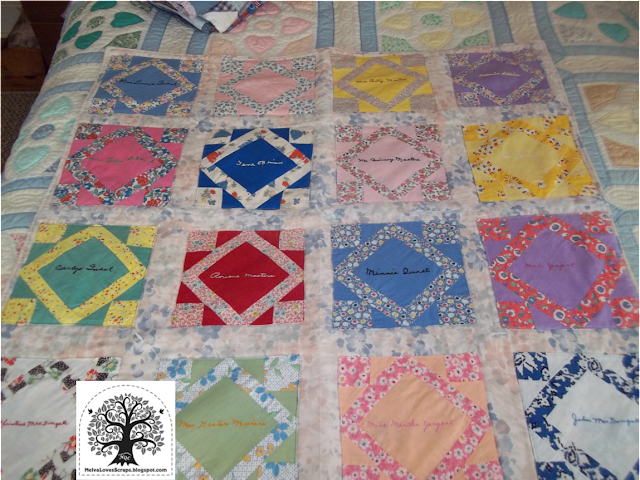 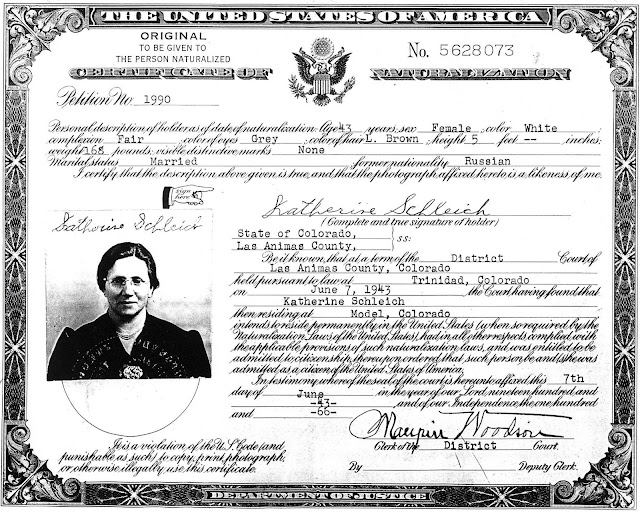 I considered my options and decided that I would make a block using her fabric, but what was I to do about a signature?  Thanks to my Mom's hard work at collecting family facts and documents, I have a notebook that had Grandma's Certificate of Naturalization with her signature! 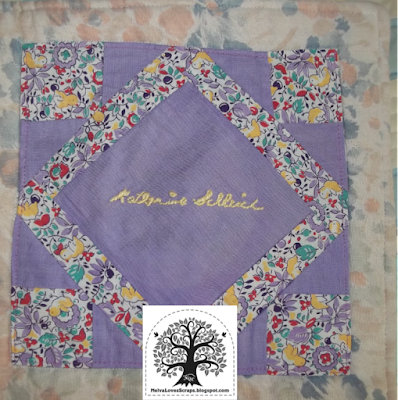 I traced the signature and then embroidered her name on it.  I should have used fewer strands of embroidery floss to stitch her name, but I didn't... and I haven't taken the time to fix it.

I began asking on around on a fb group if anyone knew of any others that had given blocks to Grandma.

You can find details on these individuals over on the Piece From The Past That Started It All post...

Now, if you look closely at Grandma's naturalization paper you will notice that she became a US Citizen in June, 1943.  I can't help wondering why she waited so long (31 years) to become a citizen?

She came to the US a a child in 1912 at 13.  I think I was told in high school that she had wanted to be able to speak and understand the English language well.  No one really knows what education Grandma had...  As I said she was age 13, turning 14 a week after arriving... Grandpa had only a 6th grade education and had attended school for two years prior to immigrating, making him 7 years old when he started school)... perhaps she had completed her schooling in Huck and never attended school in the US?  I think this could be a strong possibility.

**EDIT**  I have recently discovered that Katie did, in fact, attend school in Garfield, Kansas for one year.  The year that she arrived in the US.  I also discovered that according the census records, it was reported that she had attended school through 3rd grade.

I wonder... Did the facts that WWII was in full swing with Germany and Hitler and the Nazi Army coupled with the announcement of the opening of Camp Trinidad (and knowledge that the prisoners were going to be German) cause some concern for them?  Were they wanting to avoid any confusion or accusations of being affiliated with the Germans/Nazis?

(My Mom confirms this fact.  Grandpa took the Citizenship class(es) six months before her in December 1942.  They did not take the class together because he wanted to let her know what it all entailed before hand.{{Isn't that sweet!  "I'll go first and then tell you what you need to know."}})

I have so many questions that I wish I could have answers to!

But I am sure YOU are asking... where is the pattern for the signature block???

Here you go!  Head over to payhip and grab it now!  You will have to set up a user ID but it is quick and easy and the pattern is offered at no cost.  If you have any questions regarding the piecing of the block please let me know.  You can email me at

I  will do my very best to answer any questions about this block and help you. 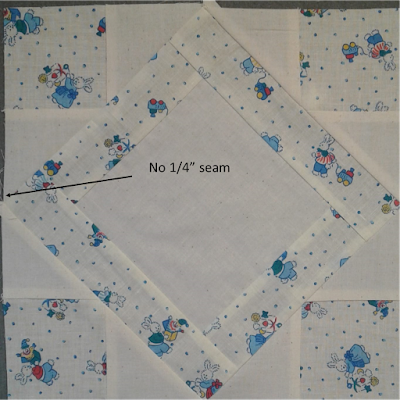 The phrase "the third time's the charm" was the case for me and making this block...

The printed newspaper patterns don't include seam allowances and even then, sometimes I wondered if it was really 3/8" or was it supposed to be 1/2".  **sigh**

I knew I wanted this block to be a 12-1/2" block for the sew along... my first block was too small and there was no 1/4" seam allowance on the outer edges which would have cut off the corner points of the center block...

I had to make adjustments for a larger block...   and the second block wasn't right because the corner pieces were still too small. 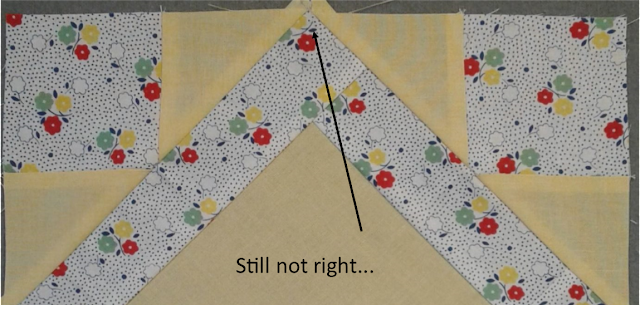 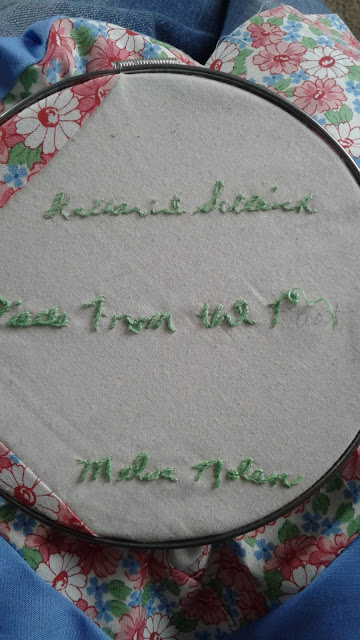 I finally got it right on the third block... **happy dance**
When I began to embroider this block I used only two strands of floss... versus the three strands that I used on the purple & yellow block I made for my Dad's quilt... you know, the one that I mentioned that I should fix...

I still did not like the look of the stitches and after having 90% of the embroider complete I decided to pick it all out.  It was just too heavy and made it difficult to read.


In the end I used one strand of floss and am much happier! 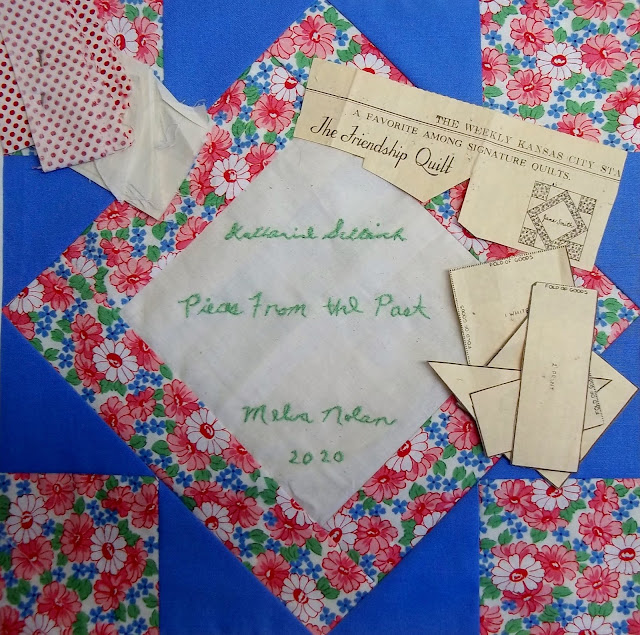 Now that you have the pattern, you may be thinking "where is the letter that you talked about sharing???"

Well, you see... I have only 19 letters, but needed 20 blocks... so the next block will feature a letter.  Don't give up on me yet!  Each block has been carefully selected to relate to each letter with regards to a topic included in the letter.  I'll be sharing some delicious recipes and a few memories from my older cousins that were fortunate enough to have her in their lives for some years.

Letter writing is a lost art. I recall writing and receiving letters to and from Dave in our short time apart during the summers when he returned home to Illinois during the summer breaks of college.  We would have the opportunity to talk on the phone as well, about once a week, but that was a little pricey as well.  With the evolution of technology and social media it should be easier to keep in touch, but the busy schedules of life can make keeping in touch a challenge.

How do you stay in touch with your family and friends?  Are you a letter writer?

Leave a comment... I'd love to hear from you.

I admit that I am bad about writing letters to others, but whenever I receive a note card of thanks for a quilt that has been gifted from us I save it to place in a scrapbook along with a photo of the quilt.  It is a helpful way to keep track of all the quilts I have made... I mean it is impossible to keep ALL OF THEM!

Now, if you haven't already, go grab your pattern, make your block and then come back to link up for an opportunity to win a fat quarter!  If you don't have a way to link up, email me (address above) and I will happily link for you.  All blocks linked up before the next pattern release (on February 13th) will be eligible for the prize drawing for a fat quarter.

When your block is complete share on instagram, tag me (@MelvaLovesScraps) and use hashtag #PiecesFromThePastSewAlong or post on my fb page - Melva Loves Scraps. Quilt Happy!

Put Your Foot Down at For the Love of Geese
Needle & Thread Thursday at My Quilt Infatuation
Creative Compulsions at Bijou Bead Boutique
Can I Get A Whoop Whoop at Confessions of a Fabric Addict
Off The Wall Friday with Nina Marie
Brag About Your Beauties at From Bolt to Beauty
Peacock Party at Wendy’s Quilts and More
Friday Foto Fun at Powered by Quilting
Finished or Not Friday at Alycia Quilts
Oh Scrap! at Quilting is More Fun Than Housework
UFO Busting at Tish’s Wonderland
Sunday Stash at QuiltPaintCreate
BOMs Away at What A Hoot Quilts