Pieces From The Past - The Dragon Fly 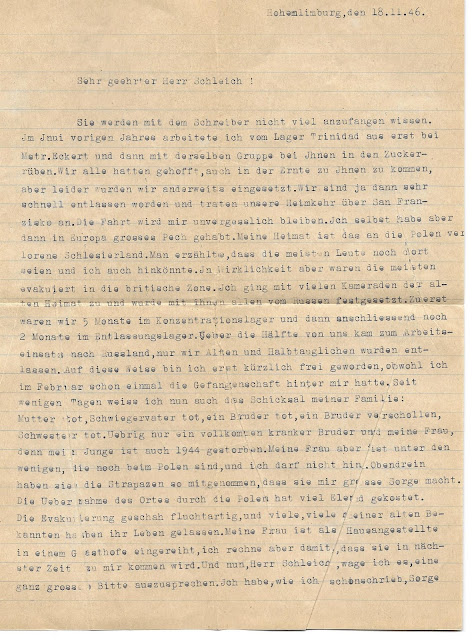 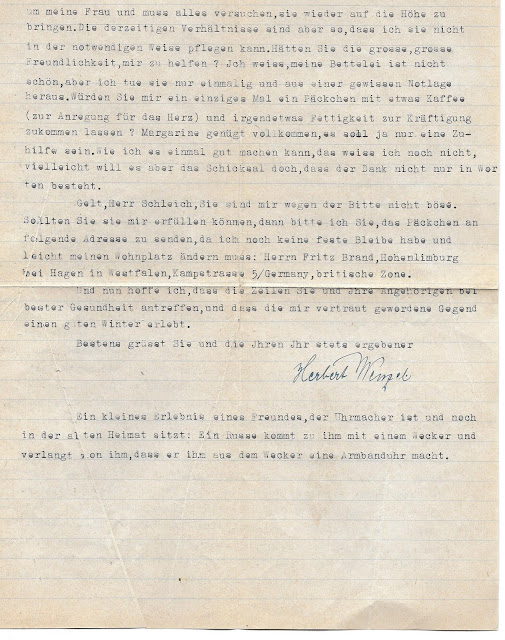 You will not know what to make of this writer.  In June of last year, I was sent to work from Camp Trinidad, first with Mister Eckert and then, in the same group, with you in the sugar beet fields.  We all hoped to also come help you with the harvest, but unfortunately we were employed elsewhere.  We were then quickly discharged and started our homeward journey in San Francisco.   The trip will remain unforgettable for me.  But once in Europe, I had a tough time.   My homeland is Silesia, which was ceded to Poland   It was said that most of the people were still there and that I could go there.  However, in reality, most of the people had been evacuated to the British Zone.  I went with many friends to our homeland but we were all detained by the Russians.   First we were in a concentration camp for 5 months and then another 2 months in a camp awaiting discharge.  Over half of our group was sent to Russia on work details, but the older and unfit ones were released.  For this reason I am only just recently free even though I had supposedly been out of captivity since February.  It has only been a few days since I have learned the fate of my family:  mother dead, father-in-law dead, one brother dead, one brother missing, sister dead.  The only ones left are a completely ill brother and my wife.  My son was died in 1944.   My wife is one of the few who is still in Poland and I am now allowed to go there.  She is so badly affected by the ordeal that I worry about her.  The takeover of the area by Poland has caused much misery.  The evacuation happened hurriedly and many, many of my old acquaintances have lost their lives.   My wife has been classified as a domestic servant in a guesthouse, but I expect that some time soon that she will be able to come to me.

And now, Mr. Schleich I dare to express a very big request.  I am, as I have already written, very worried about my wife and I must try everything to bring her up [raise her spirits or improve her health?].  The present circumstances are such that I cannot take care of her in the proper way.  Would you have the great, great kindness to help me?  I know that my begging is not proper but I do it only once and because of a certain crisis.  Would you just one time send a small package with a bit of coffee (as a stimulant for the heart) and some fat for strengthening?  Margarine is completely sufficient; it would be a help.  How I can ever repay you, I don’t know but maybe destiny would will that thanks be given not just in words [your reward will be in heaven?]. 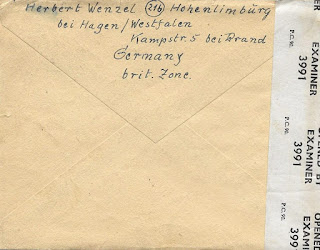 I hope, Mr. Schleich, that you are not angry with my request.  If you can help me, then I ask that you send the little package to the following address since I don’t have a permanent abode and might need to move:  Mister Fritz Brandt [address given in Hohenlimburg, British zone].

And now I hope that these lines find you and yours in the best of health, and that you experience a good winter.

Best wishes to you and yours from your ever devoted,

A small experience of a friend of mine who is a watchmaker and is still in the old homeland: a Russian came to him with an alarm clock and asked him to use the alarm clock to him make a wristwatch.


Each letter I have read requesting a small care package has somewhat boggled my mind.  I have considered the options of what Phillip and Katie could have sent to the men making the requests, trying to come up with items that would not perish and travel well.  Coffee, sugar, some canned goods, hard candies... perhaps some rice.  How could they afford the contents of a package, not to mention the cost of postage?  I had assumed it was just not feasible...

But then I read one of the Eleanor Roosevelt's journal/column and there was mention of a CARE package that could be sent to a specific person or address overseas for just $10.  ($10 in 1946, with inflation equals $131.48 currently.  WOW!)

In 1945, the newly formed CARE (then the Cooperative for American Remittances to Europe) initiated a program to send food relief to Europe, where large numbers of people were at risk of starvation in the wake of World War II.  Arthur Ringland and Dr. Lincoln Clark approached 22 American charities to propose a non-profit corporation to funnel food parcels from Americans to loved ones in Europe. The charities agreed and on November 27, they incorporated CARE.

CARE’s leaders worked tirelessly with the U.S. Army to acquire 2.8 million Army surplus "10-in-1" food rations that had been stockpiled for an invasion of Japan that never transpired. These parcels, a form of MRE (Meals Ready to Eat), were sent to Europe. These rations become the world’s first CARE Packages.   After six months, CARE delivered the first CARE Packages to the battered port city of Le Havre, France. 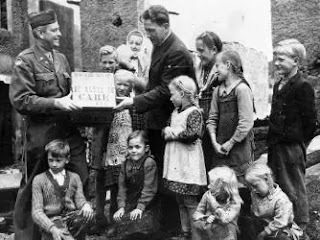 It wasn't until February 1946 though that the US government permitted the aid parcels to be sent to Germany.  ( The first request made to Phillip and Katie was written May 6, 1946)

On May 11, 1946, relief arrived from across the ocean as the cargo ship American Traveler steamed into the war-torn city’s harbor with a shipment of food—and hope. Aboard were 15,000 brown cardboard boxes paid for by CARE to bring humanitarian aid to millions starving in post-war Europe. These first “CARE Packages” contained everything from whole-milk powder and liver loaf to margarine and coffee. The contents of CARE Packages soon expanded to include soap, diapers, school supplies and medicine as well as fabric, thread and needles to allow recipients to make and mend clothes.

Americans were invited to purchase a CARE Package for $10 to send to friends or relatives in Europe. Packages were guaranteed to arrive within four months. Even when a donor did not know an address of a recipient, CARE would find that person using the last address known. The CARE package thus became a "missing persons" service in the chaos following World War II.


President Harry Truman, Herbert Hoover and Dwight Eisenhower asked Americans to support CARE. In fact, the purchase of the first CARE Package was made by President Truman himself.  By year’s end, CARE had operations in 10 European nations.  CARE developed other kinds of CARE Packages, including wool and baby food. CARE created a distribution system, regional sales offices, and stepped up promotion with advertisements featuring actor Douglas Fairbanks, Jr.

You can read the story of one recipient's memory of receiving CARE package, just how much it meant to her and her family and the impact the box had on her life over on the web-page for the History Channel.

It all makes sense now!  The men in Germany knew of these care packages.  But it seems evident that, Phillip and Katie did not.  When I shared this bit of info with my Mom, just 5-1/2 years old at the end of WWII, she stated that she had never heard of such a thing.  But given the fact that it was a newly formed organization, we all know that it takes time to promote and advertise to get the word out.  Remember news of such opportunities would have been spread by newspaper and radio... there was no social media to help spread the news.

Phillip and Katie probably would not have been able to spare the $10 to send a package, but had they had the knowledge and opportunity to do so, they may have considered doing as Eleanor Roosevelt suggested and pool resources so that the men could receive the much needed help.

Mr. Wenzel told of returning home to discover that multiple family members had been killed or were missing.  One legend/myth of Dragonflies explains that dragonflies are not your average insects. These mysterious and ancient creatures have lived on earth for millions of years, far longer than humans. They sometimes appear fearless and maybe even a bit nosey, not hesitating to land on a nearby twig or even on a gardener’s hat.

If a dragonfly repeatedly flies alongside someone as they take a morning walk, following the passing of a loved one, what would it mean to them?  For those involved, these real life experiences symbolize hope, immortality, and the afterlife. They offer comfort during a time of need.

It is for this reason that I chose a pattern from the 1936 Kansas City Star entitled The Dragon Fly. 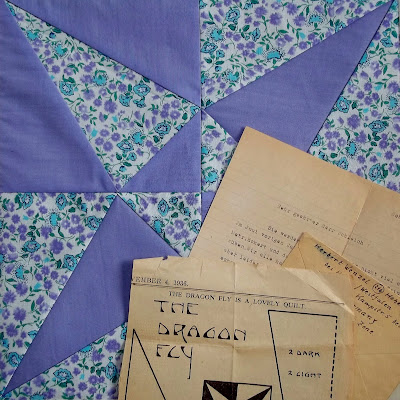 I started with 6"x7" rectangles to cover the large outside areas and a 4" square, cut on the diagonal for the center of the block. 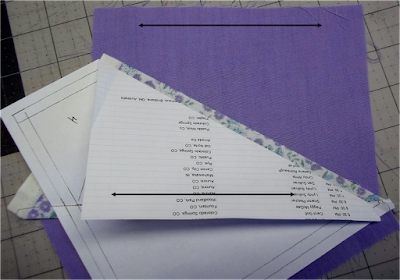 It is best to keep the straight of grain on the edges of the blocks, as shown in the pictures, indicated by the arrows, to avoid bias edges.

In the lower picture you will see that I trimmed away the excess purple and double check that the piece is large enough and sill square. 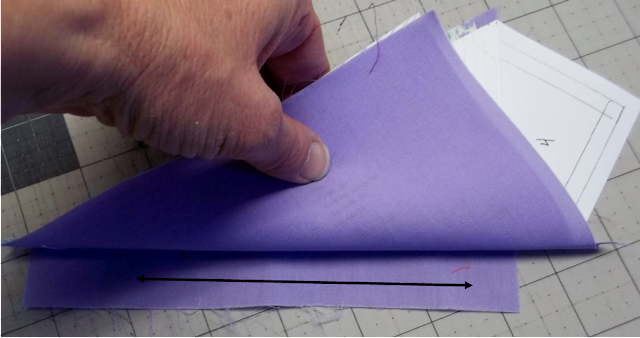 Trim each quarter section to 6-1/2 inches square and join together to make the 12-1/2 inch unfinished block.  Still have questions?  Send me an email at MelvaLovesScraps@NolanQualityCustoms.com and I will answer your questions.

Don't forget to come back and link up for the free fat quarter give away!  Tag me on instagram - @MelvaLovesScraps and use the #piecesfromthepastsewalong or share on the Melva Loves Scraps facebook page.

And before you leave, tell me...

Is this the first time you, like me, heard of CARE packages?

I just thought you sent a package because you cared!  As Paul Harvey used to say... "Now you know the rest of the story."  Leave a comment, you know I love to hear from my readers. :)

All of the previous patterns are still available as well... You can find all of the links and info over on the announcement post.