Pieces From The Past - Indian Star 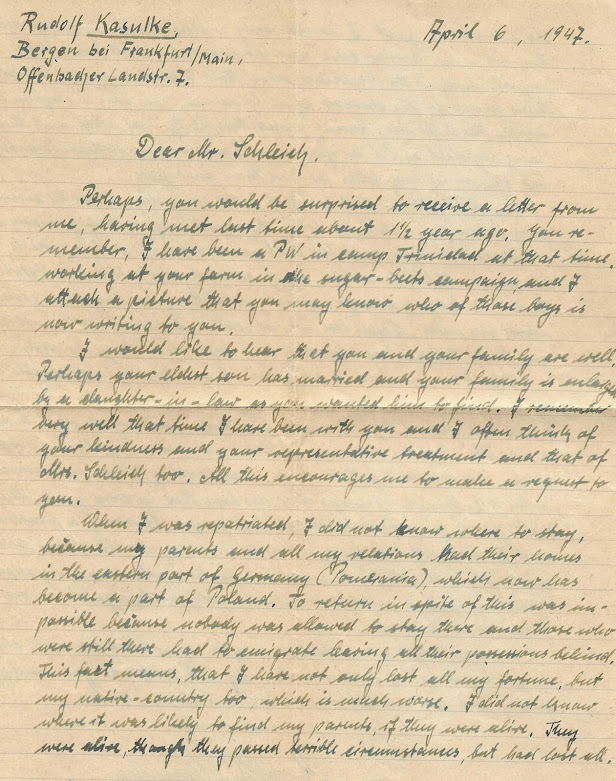 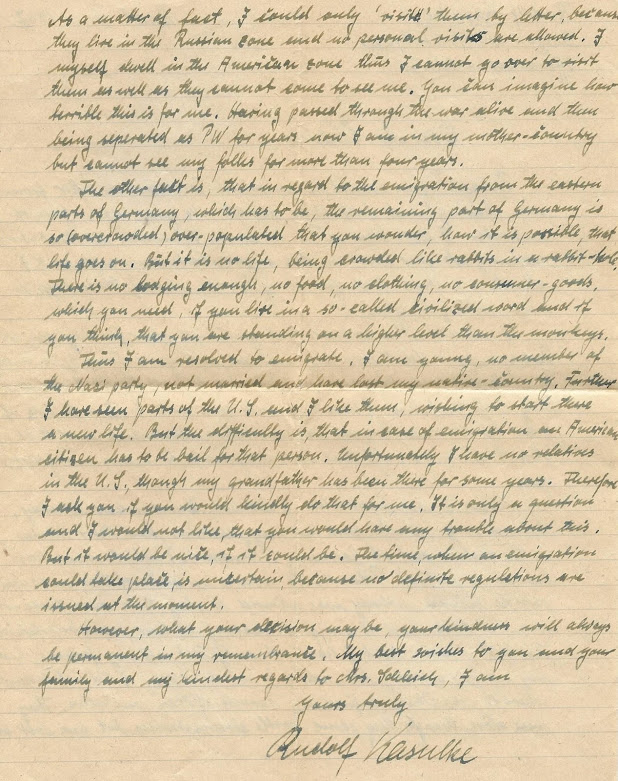 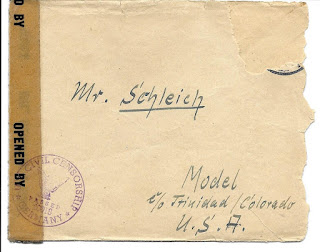 Today's letter is dated April 6, 1947 - nearly a full year since the first letter was sent, dated May 6, 1946.  Notice that they were still censoring letters.  The letter is written in English.  However, again, for ease of reading, I have typed it out. Mr. Kasulke makes a desperate plea.  Take a look...
Rudolf Kasulke
Bergen bei Frankfurt/Main
Offenbadger Landstr. 7
April 6, 1947
Dear Mr. Schleich,
Perhaps you would be surprised to receive a letter from me, having met last time about 1-1/2 year ago.  You remember, I have been a Prisoner of War in Camp Trinidad at that time working at your farm in the sugar-beets campaign and I attach a picture that you may know who of those boys is now writing to you.
I would like to hear that you and your family are well.  Perhaps your eldest son has married and your family is enlarged by a daughter-in-law as you wanted him to find.  I remember very well that time I have been with you and I often think of your kindness and your representative treatment and that of Mrs. Schleich too.  All this encourages me to make a request to you.
When I was repatriated, I did not know where to stay, because my parents and all my relations had their homes in the eastern part of Germany (Romania), which now has become a part of Poland.  To return in spite of this was impossible because nobody was allowed to stay there and those who were still there had to emigrate, leaving all their possessions behind.  This fact means that I have not only lost all my fortune, but my native country too, which is much worse.  I did not know where I was likely to find my parents, if they were alive.  They were alive, though they passed terrible circumstances, but had lost all.
As a matter of fact, I could only “visit” them by letter because they are in the Russian Zone and no personal visits are allowed.  I myself dwell in the American Zone, thus I cannot go over to visit them as well as they cannot come to see me.  You can imagine how horrible this is for me.  Having passed through the war alive and then being separated as a Prisoner of War for years now and am in my mother-country but cannot see my folks for more than four years.
The other fact is, that in regard to the emigration from the Eastern parts of Germany, which has to be, the remaining part of Germany is so (overcrowded) over populated that you wonder how it is possible that life goes on.  But it is no life, being crowded like rabbits in a rabbit hole.  There is no lodging enough, no food, no clothing, no souvenir goods which you need, if you live in a so-called civilized world and if you think that you are standing on a higher level than the monkeys.
Thus, I am resolved to emigrate.  I am young, no member of the Nazi part, not married and have lost my native country.  Further, I have seen parts of the U.S. and I like them, wishing to start there a new life.  But the difficulty is that in case of emigration an American citizen has to be bail for that person.  Unfortunately I have no relatives in the U.S., though my grandfather has been there for some years.  Therefore I ask you if you would kindly do this for me.  It is only a question and I would not like that you would have any trouble about this.  But it would be nice if it could be.  In time, when an emigration could take place, is uncertain, because no definite regulations are issued at the moment.
However, what your decision may be, your kindness will always be permanent in my remembrance.  My best wishes to you and your family and my kindest regards for Mrs. Schleich.
I am yours truly,
Rudolf Kasulke
You can feel his anxiety as he penned the letter to request assistance with sponsorship and his return to the United States.  He wrote that he included a photograph so that Phillip and Katie could put a face and name together.  However, after all the years of these letters being moved from one home and "care taker" to another, the photo seems to have been either misplaced or perhaps slipped in with another letter. 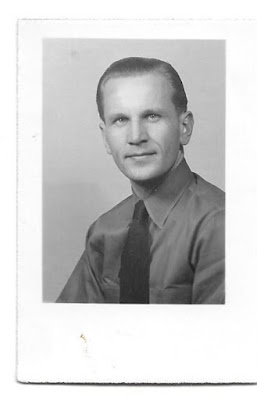 I decided I would go back and look back at previous letters that had photos included.  I saw this photo and the writing on the back of the photo seems to match the hand-writing of Mr. Kasulke.  (I have corrected the post the photo was included in previously.) 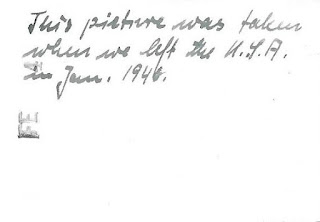 Mr. Kalsuke makes mention of Phillip's and Katie's eldest son - Edward William Schleich - who went by the name of Bill.  He was born in March of 1921 and would have been 26 years old at the time that the letter from Mr. Kasulke was received.  Bill was often the driver of the truck when the Schleich's had the POWs work at the farm.  Bill was the one having the conversation with my Dad regarding Camp Trinidad and the men that helped in the sugar beet fields.  The recording of the conversation was included with the Friendship Quilt Block post in June.
Bill was not, in fact, yet married at the time of this letter.  He married in October 1949 and had a daughter - Glenda - born in 1953. This picture is probably from 1954.  Bill is in the brown jacket and cowboy hat in the center, his wife - Ethel holding their daughter, Glenda, next to him. 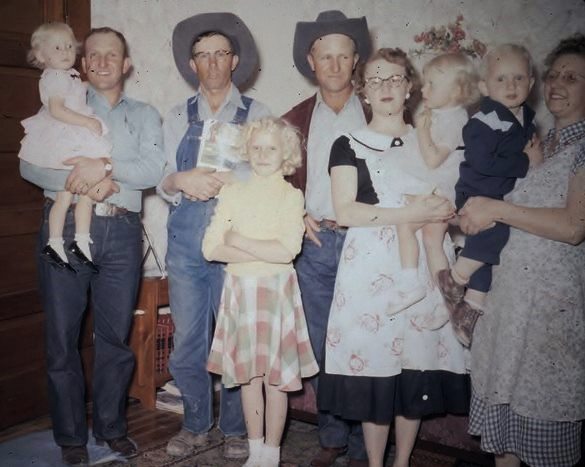 When I called my cousin Glenda asking for a few of her special memories she shared these things with me...
"Daddy's favorite dessert was cherry pie, and he would even bake the pies himself.  Most days for breakfast he had bacon, eggs and toast but on occasion he would have pancakes.  He didn't like syrup so he would put peanut butter on his pancakes.  He typically had bacon, eggs for breakfast.  On a rare occasion when he did have syrup his fork would end up sticky and he would say "How does the d@m* syrup always jump to the top of the fork?" He didn't like sticky fingers!"
When I asked about his favorite meal the answer was "I don't think he ever sat down to a meal he didn't like."  Uncle Bill was much like my Dad, some meals may have been sub-par and they would let the cook know it, but they would never walk away hungry.
"Daddy would have popcorn just about every night and he loved watermelon and cantaloupe", we spoke in unison, "of course!"  The Arkansas Valley farmlands are known for their melons... the "Rocky Ford Melon" is now quite popular across the US, and the Arkansas Valley Fair has had a "free melon day" that people would line up for well before the give-away started.
My memories of Uncle Bill... He was my sponsor at my baptism.  I don't recall the event since I was just 6 moths old.  I was raised in the Methodist church and they didn't use the term "God-father", but essentially, that is what he was.  He had a large garden and cherry trees. He also had horses and chickens.
I recall one particular story Dad told of helping his Mom butcher a chicken.  She had instructed him on how to hold the chicken so it would not get loose while on the butcher block... and to not let go once the head was off.  (sorry if this is too graphic...)  Oh to hear him tell it!  LOL! The chicken managed to wiggle loose and the wings started flapping, hitting him in the face (I just can't stop laughing!) and eventually got loose... (Yep!  A chicken, running around with it's head cut-off)  And Katie was mad because the meat was going to be bruised.  I don't know how long it was before the chicken was captured again, but when he told this story it didn't matter, because all listeners were having a hardy belly laugh. 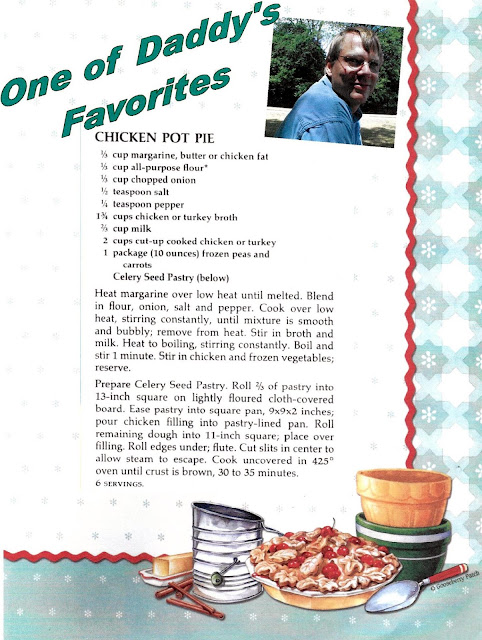 Since the chicken meat ended up bruised, perhaps Katie opted to make chicken pot pie instead of making roasted chicken... Chicken Pot Pie is one of my husband's favorite meals.  Several years ago I made up a special cookbook for our daughters that contained some favorite recipes from family members and close friends, as well as picture of the individual or couple.  I included their Dad's favorite in their books...
It is a recipe from the Betty Crocker recipe book we received as a Wedding gift 35 years ago.
I shared a slow-cooker recipe for Chicken and Dumplings, another favorite, in 2018.  Chicken and Dumplings is a meal that could be stretched a bit further with extra veggies and "gravy" and served with bread (another staple on our table at dinner time)... I wonder if this would have been a meal shared with the POWs when they worked at the Schleich Farm?  I'd like to think so. :)
Now, on to the pattern that accompanies this letter... The Indian Star.  This block is an easy block to piece and should measure 12-1/2" inches when finished. 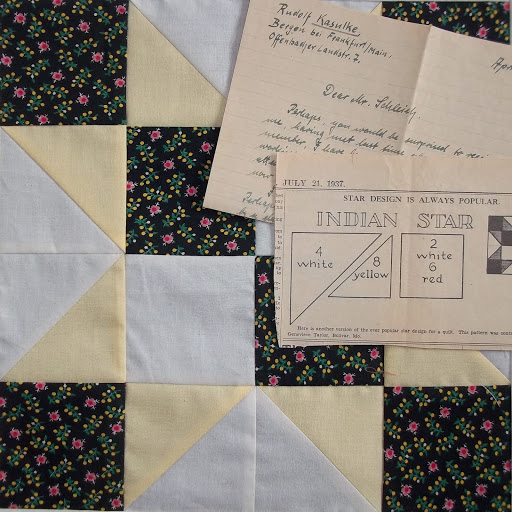 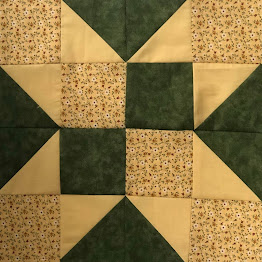 One pattern tester, Stacey, reversed her lights and darks... the end result is interesting.  I'll be waiting with great anticipation to see what fabrics and colors all of you choose for this block.  Come back and link up when your block is finished for an opportunity to win a free fat-quarter.
So, as I wrap up, tell me...
What was the stand out item in Mr. Kasulke's letter for you?  Or this post in general?
Leave a comment... you know I love to hear from you!
Piece Happy!
Melva
Linking with:
Put Your Foot Down at For the Love of Geese
Needle & Thread Thursday at My Quilt Infatuation
Creative Compulsions at Bijou Bead Boutique
Can I Get A Whoop Whoop at Confessions of a Fabric Addict
Off The Wall Friday with Nina Marie
Brag About Your Beauties at From Bolt to Beauty
Peacock Party at Wendy’s Quilts and More
Friday Foto Fun at Powered by Quilting
Finished or Not Friday at Alycia Quilts
Oh Scrap! at Quilting is More Fun Than Housework
Sunday Stash at QuiltPaintCreate
Patchwork & Quilts at The Quilting Patch
BOMs Away at What A Hoot Quilts
What I Made Monday at Pretty Piney
Monday Making at Love Laugh Quilt
Design Wall Monday at Small Quilts and Doll Quilts
Colour & Inspiration at Clever Chameleon Quilting
Mid-week Makers at Quilt Fabrication
Wednesday Wait Loss at The Inquiring Quilter
Posted by Melva at 12:01 AM