I had great plans to accomplish during the storm this weekend.

My full intention was to finish one of the quilts for the Scrap Addict group I am part of...

I can't show you a picture of the project just yet, but trust me... It involves smaller pieces than I typically work with... kinda like those Bitty Basket blocks, but a stash/scrap buster!

I did find myself a bit distracted and desiring to work with fabric pieces a little bigger.  Up first were some scrub tops that my daughter had asked me to make.  she had purchased the fabric and never got around to making them.  And now that she has a 6-month old daughter that is moving around, she realized that it would probably be awhile before she would have time to do so. 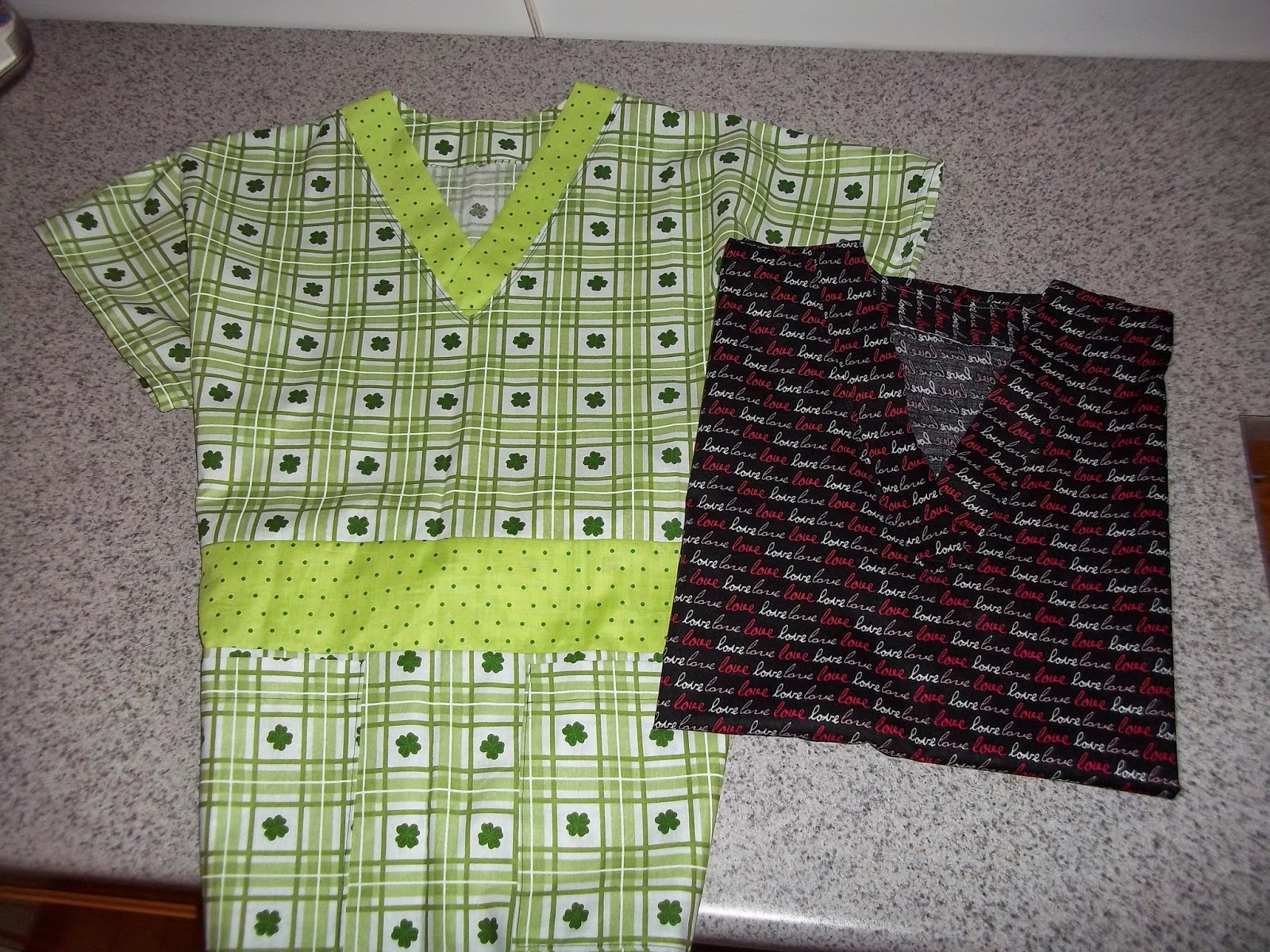 There wasn't quite enough shamrock fabric for a regular top, so I got to be creative and make up the difference. She thinks that it turned out cute!
Next up were wine bags... made from some of the fabric I was gifted in January!  Wildlife fabric has always been popular sellers at the local liquor store where they are available. 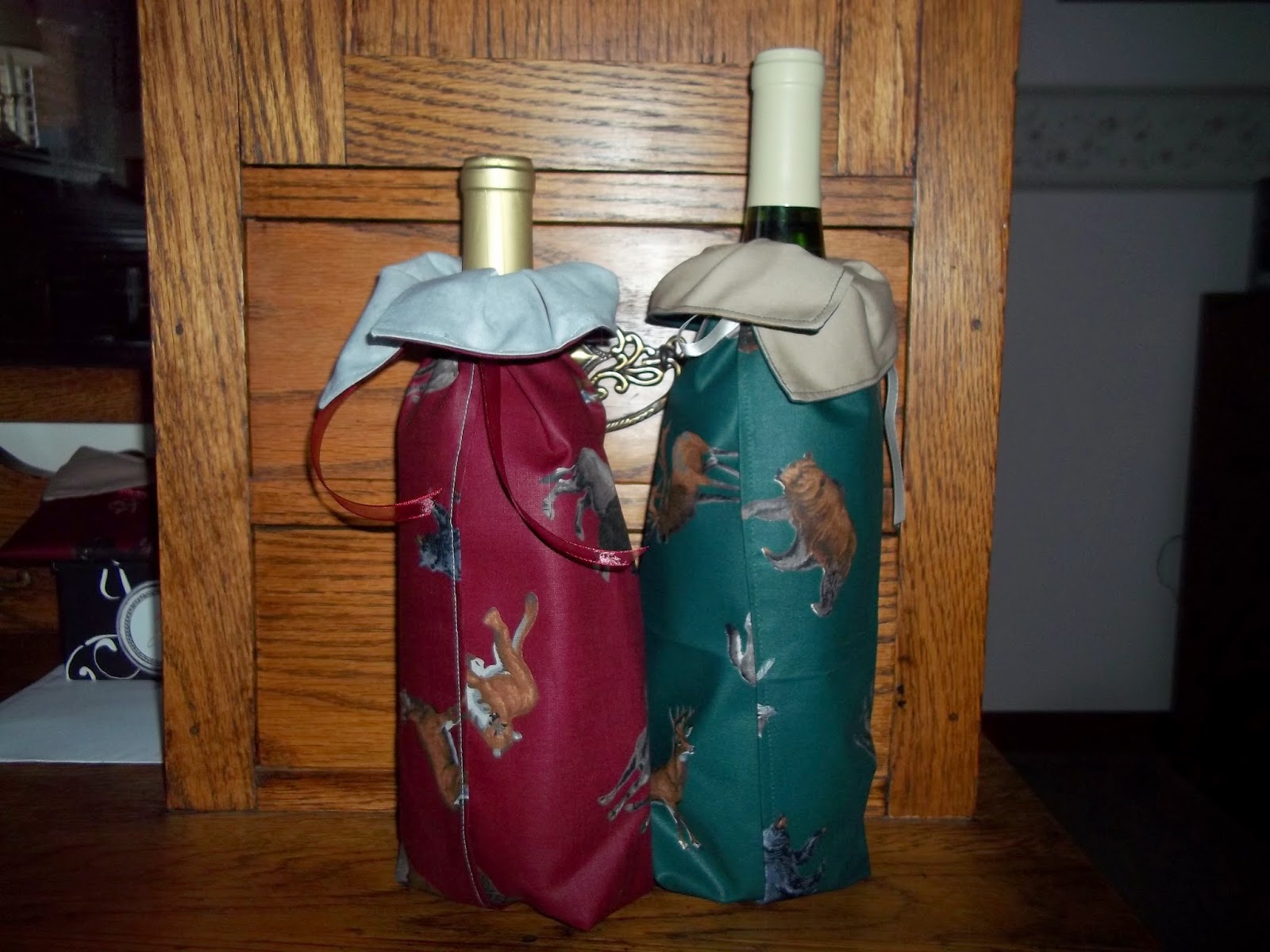 I did eventually get to the scrap addict project and am nearly done with the borders!  However, I did NOT get to the Bitty Baskets... Oh well,  Another time!

This week will involve setting up for the fundraising event.  I'll catch up with everyone next week.

Want to see what other quilters are talking about?
Check out Quilter Blogs

I've not had a lot of time to spend in my sewing room this week... and I miss it!  I have been helping the college Foundation get ready for their annual fundraising dinner - an event I have always enjoyed helping plan and feel honored to be invited back each year to offer assistance wherever they may need it.

What little time I have had I  played with some "bitty baskets"... Here is a link to their blog that explains it all.  Quiltmaker's Blog

They suggest making 14-18 blocks.  These are itty-bitty pieces, folks!   The finished block is only 4"... And I only have three done. I still feel strongly that larger pieces/blocks are so much easier... but I am trying to expand my horizons and improve as a quilter.  After all, if you can make a 4" block nice and square, the 12" blocks will be all the better. Right? 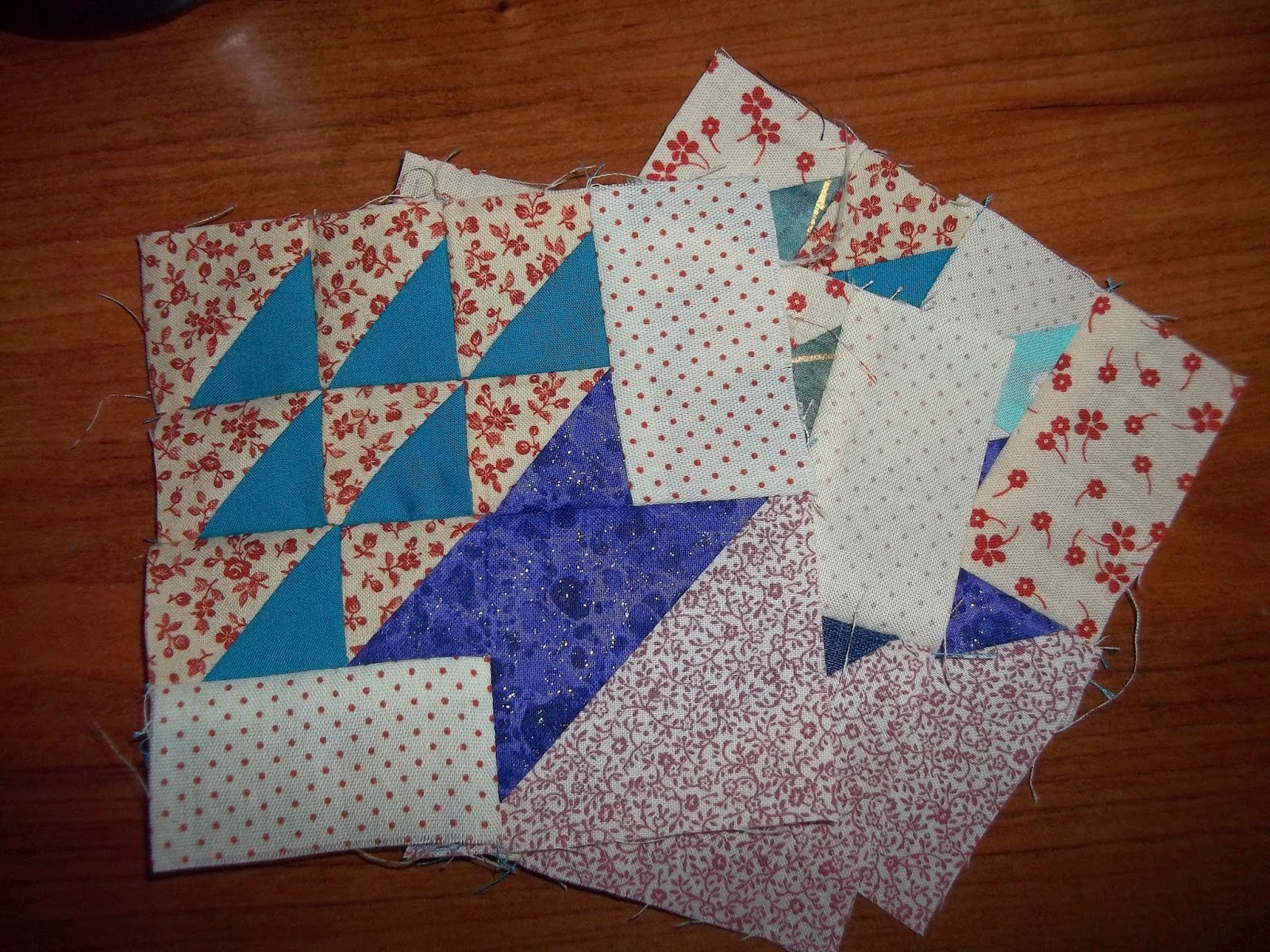 Ugh!  However, on the bright side - The weather professionals are predicting that there is supposed to be a big storm moving in tonight and through the weekend.  Which means that I may have plenty of time to work on getting them done... just in time for the next installment of "bitty blocks" in March.

I've been busily working on a few quilts... three of them.  You may recall that back in December I had written about how I disliked having multiple quilts/projects going at one time.( I have a problem )  In other areas of life I can easily multi-task, but not when it comes to my time in my studio.

So a couple weeks ago I needed to begin another t-shirt quilt featuring some Colorado Rockies T's.  I will be donating it to the TSJC Educational Foundation annual dinner/silent auction.  I pulled out all of the shirts and began cutting.  Since Todd Helton is to be the guest speaker I began a hunt for a Helton shirt to be included in the quilt...  I had a friend hunting for one in Colorado Springs and when that ended unsuccessfully I hit e-bay.  Success!  But I still needed to wait...

I had unfinished project.  Ugh.

While visiting friends in Texas in January I brought home a collection of fabric.  There were Batik dyed fabrics from Nigera and some beautiful pieces from India (I think) among a variety of other fabrics and unfinished projects.  The previous owner of the collection passed on to me that she had intended one of them for her husband. It was basically done, except for the borders.  I discovered that the border fabric was also one of the beautifully designed fabrics from India that one of her sons picked up for her while working there. 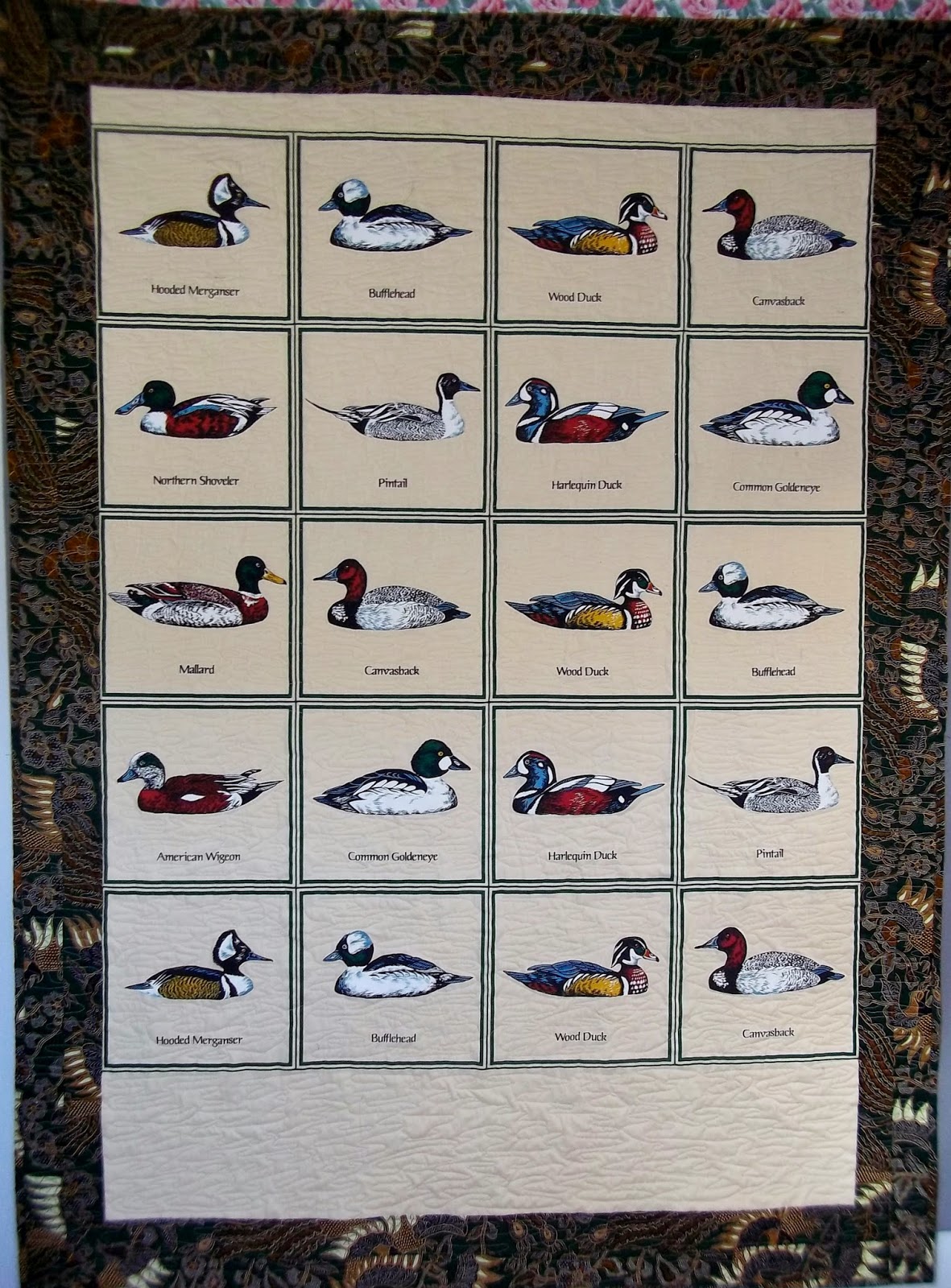 It appeared that the center portion was actually a printed cotton shower curtain since there were a few "blocks" that had been cut off (possibly with the intention of becoming pillows?) and one of them still had the top part with the place for inserting hooks to hang it.  Ingenious idea actually.  While visiting with our friends we learned a bit about Jack's dad, the intended recipient of this quilt, and that he loved ducks.
It didn't take much to finish the top.  And then I had the brilliant idea that I would free-motion quilt it to look like ripples on the water from the ducks swimming.  Never have I done such close quilting before... It seemed to take forever! And it used so much more thread than I usually use... (but none the less, I have three more empty spools for my count of spools for 2015.)
Project #1 done!  And I was still waiting for the Helton shirt...
While this wasn't really a UFO, I knew that the quilt top would go together quickly since it was just the checker board strip that needed to be created...  In Project #2 I used one of the pieces from Nigeria in a more modern style than I typically am drawn to.  This fabric had a large print on it and it really needed to be left as complete as possible... 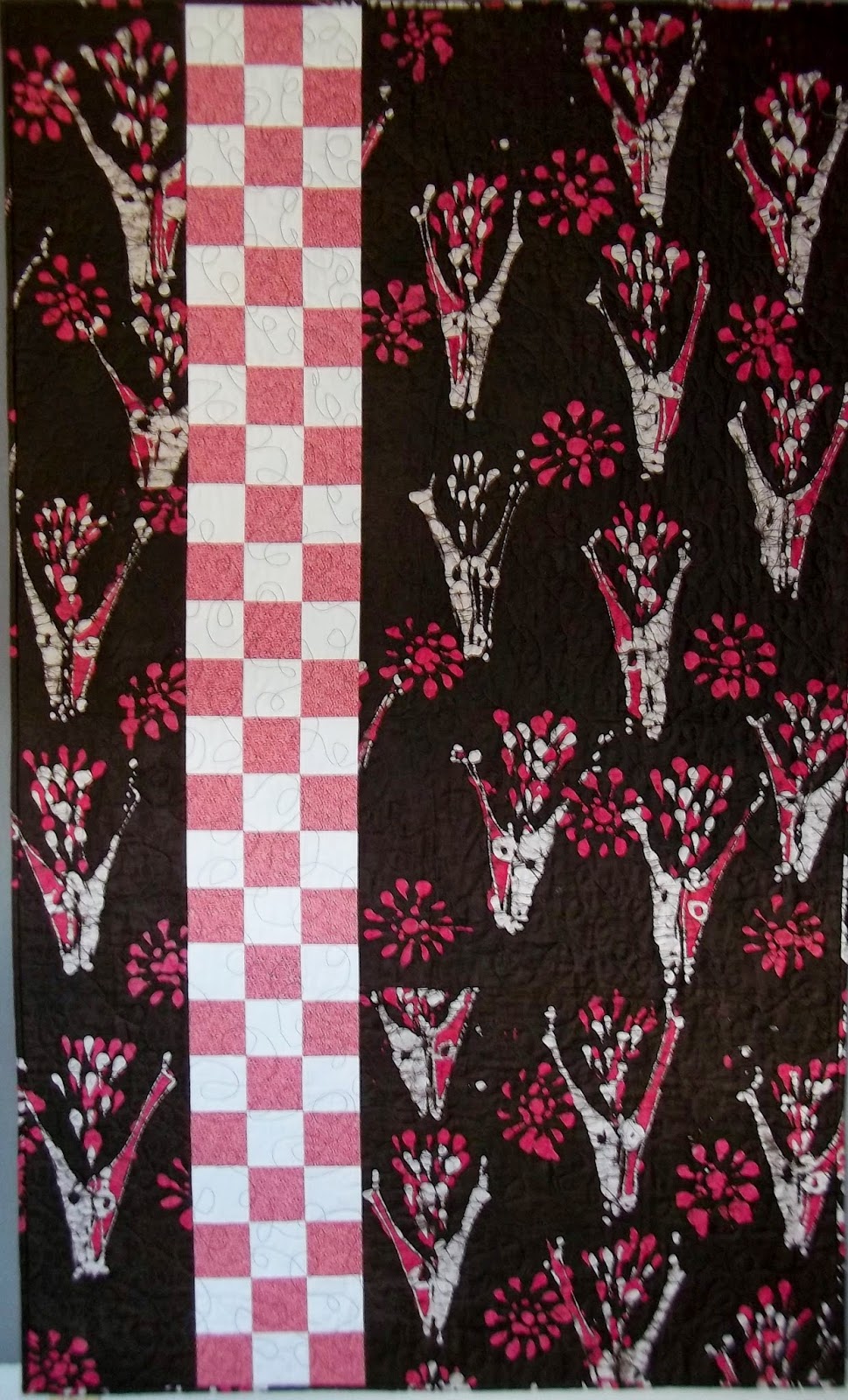 It simply would not have done justice to the fabric to make it into smaller pieces - the print would have simply been lost.  I hope that Jamie likes it!
But before #2 was done I received the Helton shirt.  I was anxious to get started since the fundraising dinner was quickly approaching, but needed to finish the binding on the Nigerian quilt.  You can bet that as soon as the last stitch was in, I moved on quickly!
This quilt was graced with border fabric from Nigeria!  It was the perfect color... 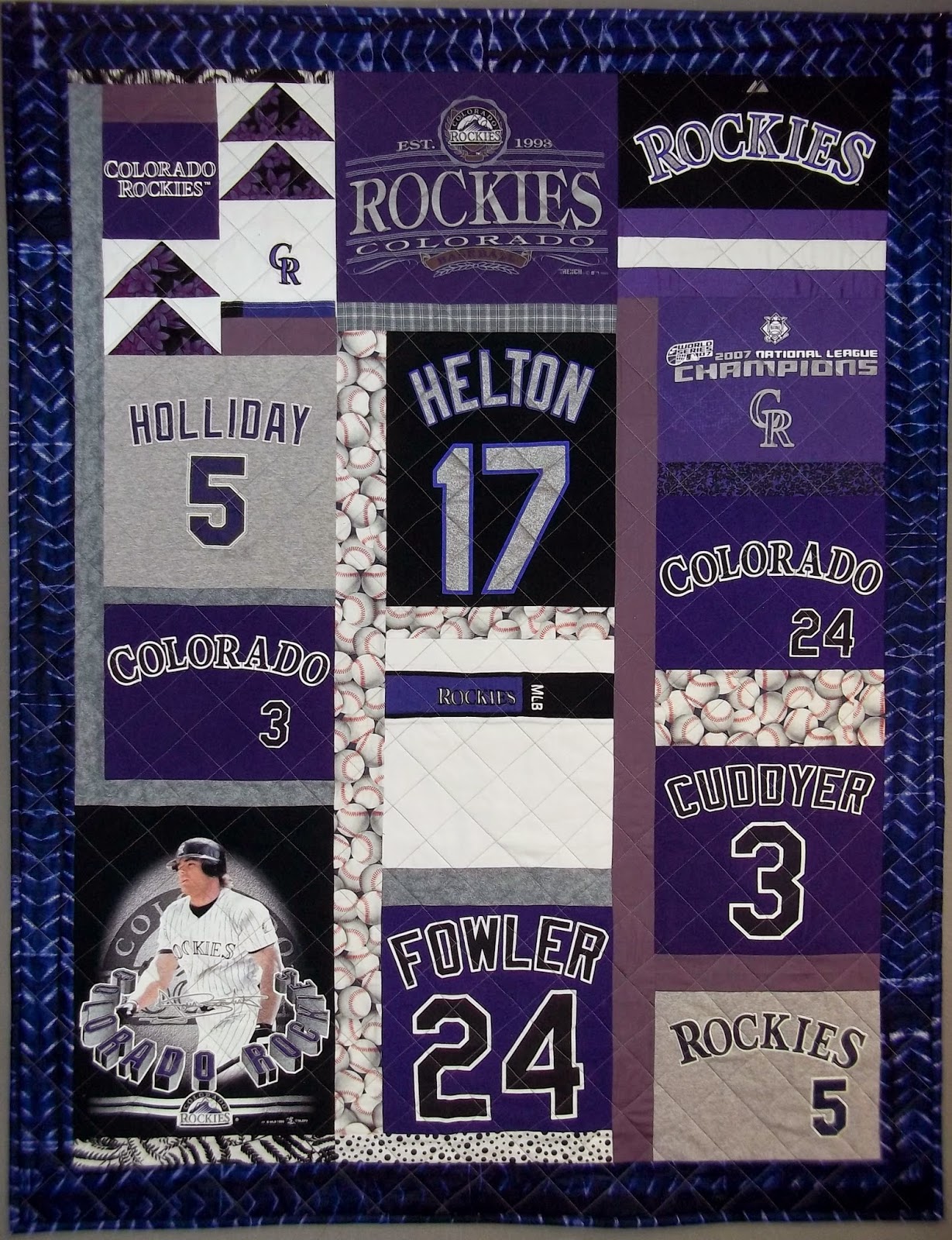 Yes?!?
So, while I was a bit of a nervous wreck and undecided about what to do next with three UFO's, I have come out successful and ready to move on to the next project.
What WILL it be???

See what other quilters are doing at Quilter Blogs﻿
﻿
﻿
﻿
Posted by Melva at 1:55 PM No comments: