Teatime with TT and Karri 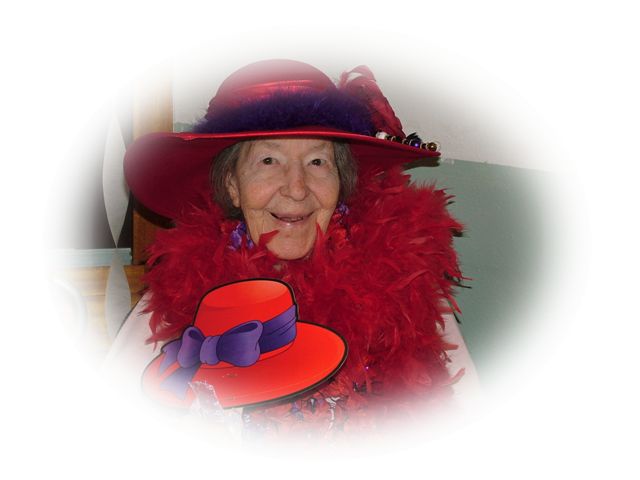 Welcome to Teatime with TT... Tressie Teegarden.  Today, Karri, is stopping by to share some of her most special memories...  Won't you grab a cup of tea and join us?  Karri is the youngest grandchild, to Tressie...
Grandma knew how to entertain.  I was always impressed by her fancy dishes and doilies on the table.   We were camping on the property and Grandma brought a tray of little seashells out with little appetizers on them.  I do not know where she kept them in the camper, which just held essentials, but I was a fan for life and always tried to emulate her grand style. I still have the chocolate box of seashell dishes.
Grandma always had a flair for the fancy... She would often use paper doilies on the plain plate, platter or tray to fancy things up.  She always had an assortment of cut-glass relish dishes, candy dishes and crystal stemware.
Karri's memory of the appetizer event was not one that I was around for.  But my Mom, Carol, remembered it and said, "I was not impressed with the appetizers.  They were supposed to be some exotic, fancy thing.  But I didn't like them."  And, the fact that they were "roughing it" while camping at the property, that was no excuse for not doing things up just right! 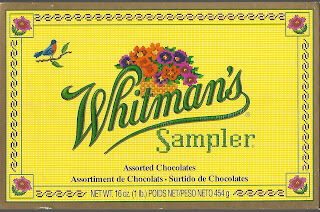 That chocolate box that they were stored in?  It was a Whitman's Sampler box.  The chocolates were a staple in their house.  Forrest would purchase them from the Walgreen's.  And each holiday he would purchase a small stuffed Snoopy holding a miniature box of chocolates.  They had a whole collection of Snoopy dogs!
TT could turn her ordinary afternoon tea into fancy in nothing flat with a small plate, a few doilies and some cookies to go along with her cup of tea.
When Tressie organized a large family reunion she planned for a brunch on the last day.  Included on the menu were crêpes. I remember being in the kitchen for hours making them.  They were filled with a sort of cream cheese and whipped cream filling and topped with an orange marmalade and pineapple syrup and crushed macadamia nuts.
Tressie and Forrest had traveled to Europe in the early 80s, and that may have been when she decided that she admired any and all things related to the Queen of England and Princess Diana. 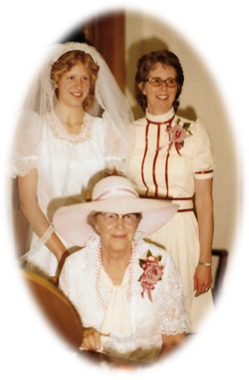 On the day that Prince Charles and Lady Diana were wed she was among the many around the world that rose very early to watch the world broadcast of the wedding.  I seem to recall hearing that she was "all gussied up" for the event too. If the Queen or the Princess made a fashion statement, she wanted to give it a try.  And they only reinforced her love for hats.  Tressie wore a hat to my wedding... I think she tried to talk my Mom to wearing one as well, but she wanted nothing to do with it. LOL!
Tressie was also impressed with Barbara Bush's strands of pearls.
We always went out to eat at the Club 21. The adults would have their beverages and Grandma would insist on Shirley Temple drinks for us three girls so we would feel special drinking our fancy drinks.
As a child I remember that Grandma enjoyed happy hour nearly as much as she enjoyed her morning and afternoon tea times.  She and Grandpa would make plans to take us out for dinner at least once during our visits.  Club 21 was always one of their favorites, but I don't recall that there was anything all that special about it.  Sometimes they would invite their friends, Don and Beth, over for happy hour before going out. I don't recall any Shirley Temple drinks, but I think we had a choice of ginger ale, or 7-up... over ice, of course.
Tressie was a member of the China Painter's club for years and she would often help to plan and organize their annual luncheon.  Fancy fruit trays and finger sandwiches were right up her alley.  As Karri said, "She knew how to entertain."
Here's a tidbit of trivia for you...
English tradition gave us the terms "high tea" and "low tea."  These terms actually refer to the type of table on which the tea was served.  High tea was traditionally the substantial evening meal served family style on a high dining table.  Hearty foods like shepherd's pie and other meat dishes were served along with bread and butter, cakes, pastries and of course, tea.
Low tea was traditionally the afternoon snack served in a parlor or sitting room at a low table next to the sofa.  Dainty foods in small quantities such as finger sandwiches, scones and pastries were served along with tea.
One theory about the raising of the little finger when drinking tea is that in the Middle Ages the upper class ate with only three fingers while the commoners ate with all five.  Therefore, extending the pinkie was an indication of arrogance or self importance.
One of the favorite treats the English enjoy with tea is warm scones topped with strawberry jam and fresh cream. 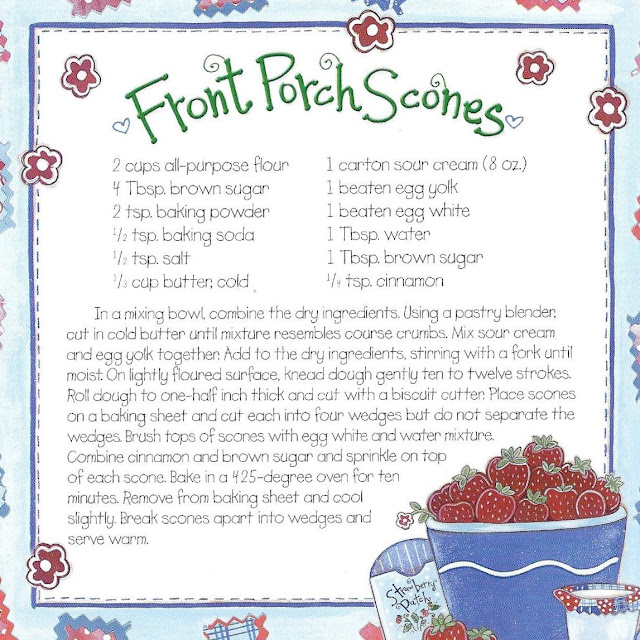 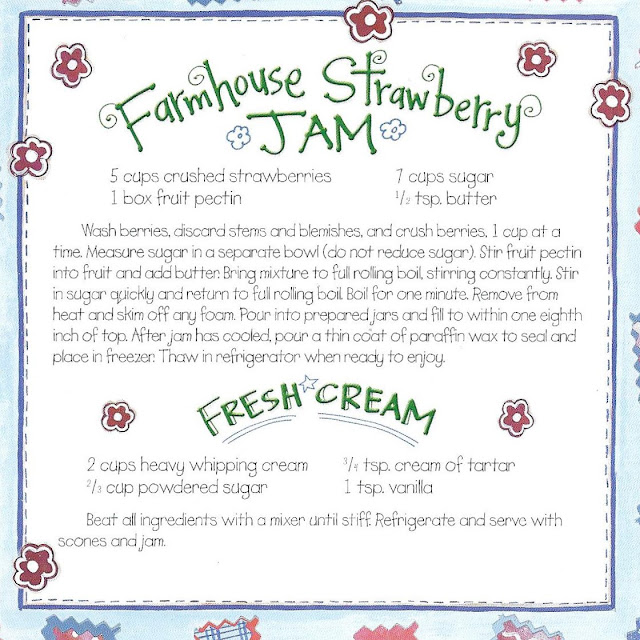 Did you watch the royal wedding?
Prince Charles' in the 1980s or even William's or Harry's just a few years ago?
Leave a comment... I'd love to hear from you!  Did you dress up for the event?  Did you rise at O'dark-30 to see all of the pomp and circumstance? 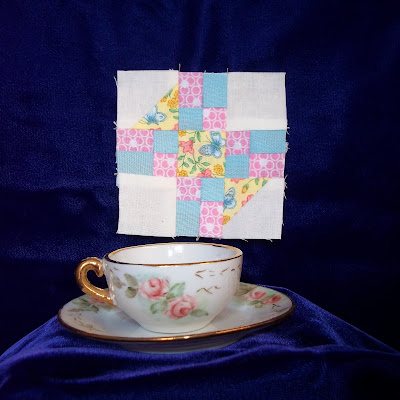 If you haven't already done so, head over to Payhip to get this month's free pattern... Stitch up your blocks and then link up your finished blocks for a chance to win a selection of teas from Corner Stone Tea Company!  I encourage you to check out her tea selection and use PROM in the promotion box to get a 20% discount for all teas through May 25th.
Follow me on facebook at Melva Loves Scraps or on instagram @MelvaLovesScraps and use these hashtags so that everyone can see our gardens grow!  #PiecesInTheGarden #Piecesinthegardensewalong #Piecesinthegardenrowquilt #TeaTimeWithTT
Keep Piecing!
Melva
Posted by Melva at 3:00 AM

Email ThisBlogThis!Share to TwitterShare to FacebookShare to Pinterest
Labels: pieces in the garden