The Adventure Quilt - Round About

In the summer of 2005 we took a family vacation across the country.  We had a weekend stop in Michigan to enjoy time with Dave's family at the family cottage in Southern Michigan and then continued east... a first for all four of us!

Our first stop was in Gettysburg, PA... and this was our first experience with a round about.  Thankfully, I was not driving - I was simply the navigator reading the map.  It was before smart phones and GPS thingys, though I may have printed out some directions to get us to our hotels since I had done reservations on-line.

We were a little stunned as we entered the round about... Our girls had been quizzed on round about rules during the tests to get their driver's license, but NONE of us and actually traveled THROUGH one.

I think we may have gone around the crazy thing a few times before we figured out which "exit" we wanted.  LOL! 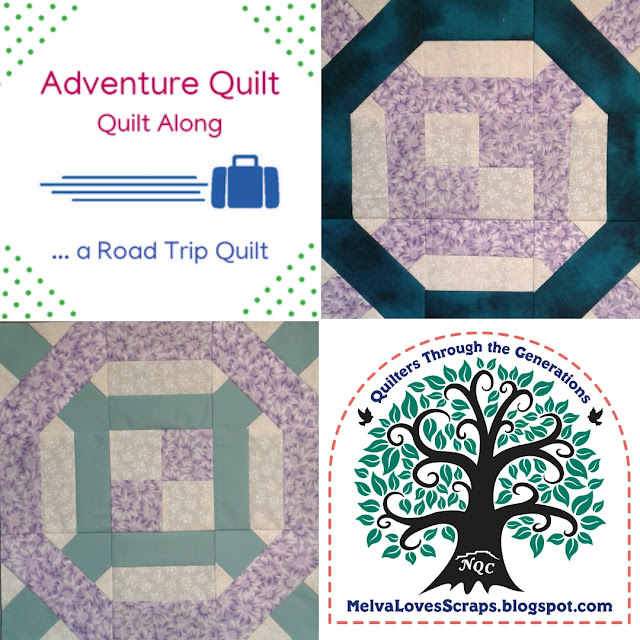 A few years later, our tiny little town got its very own round about!  The entire town was anticipating the opening of the round about.  There were many citizens of the community that were very vocal and let the city officials know they were not happy about it!  One friend of our's happens to be employed by the City even took his lunch break at one of the fast-food places near the area so that he could be entertained by the confused drivers.

Years have passed and, for the most part, most of the residents have adjusted and know what to do there.  Though, (whispering...) my Mom still avoids the intersection... shhhhh... don't tell 😉

This block was primarily paper pieced.  I tried to do a shortcut for the four blocks that are like fence rails... I ended up doing them paper-pieced in the long run.  So much for saving time!

Kate and Tammy will have this block available for just a short time more... head over there and grab yours!

I love that they included a paper pieced block.  While I don't prefer paper pieced... thus my attempt at a "short cut", I am not afraid of it.

How about you?
Do you like foundation paper piecing?
Or will you avoid a block because of it?
What is your favorite piecing technique?

Leave a comment and let me know your feelings?  I'd love to hear from you!

Email ThisBlogThis!Share to TwitterShare to FacebookShare to Pinterest
Labels: The Adventure Quilt