My first quilting retreat is in the books!  I had a fun time, met many new quilting friends, laughed plenty and made a quilt top. 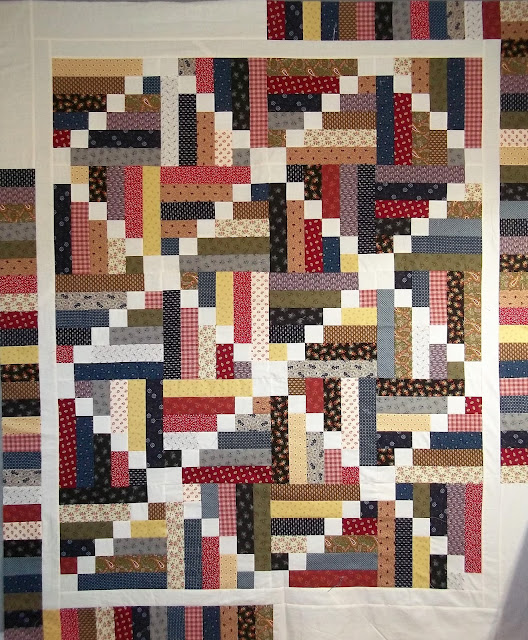 The pattern, Sticks & Stones, from Missouri Star Quilts was an easy pattern and layout to follow without having to pay too close attention... though there were a few seams that needed to be ripped out.  The time with Jack was only because I missed a couple sticks of the fabric being too close together.
Once I had my top complete, I volunteered time with Jack on the behalf of a few other quilters.  It was a great opportunity to visit with them one-on-one and get to know them better.
And though I haven't included any photos of the entertainment, it was spectacular!  Several quilters performed the song "My God" from Sister Act.  What a hoot!
We also had a "quilt parade" where we visited each room and oohed and aah'd over each of the quilts we brought to sleep under.  Most had a poignant story accompanying it... but none more touching than the Double Irish Chain quilt by Felicia that she had started for her husband.  He had picked the colors and pattern and before she was able to complete it, he passed away.  She has a love/hate relationship with it and shared through her tears about finishing it after his passing.
The variety of fabrics and colors chosen by each quilter for the retreat quilt varied greatly and spoke to each one's personality. 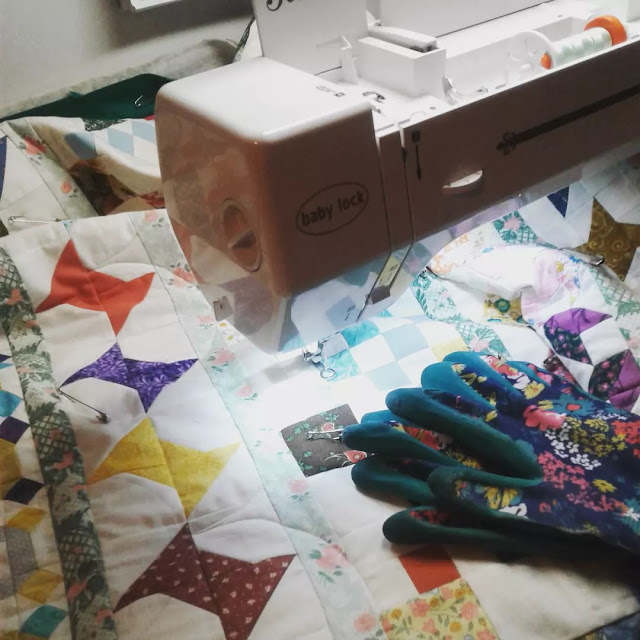 I have been happily busy back in the studio finishing the quilting of the Pieces in the Garden Quilt.  I was pleasantly surprised to discover that it did not take nearly as long to complete as I had anticipated. 😀😚 Last Wednesday I had a laser treatment at the Chiropractor's office to speed along the healing of shingles and reducing the inflammation causing the discomfort in my right arm/shoulder. When Dave left in at O'dark-thirty for deer hunting on Friday morning I was unable to return to sleep... (you can follow the link to see the details of what happened.)  I enjoyed a cup of Chai tea and then went to the studio to do a few rows of the "large-ish" (5" half-circles) clamshells I'd chosen for the quilting design.
With a few short breaks sprinkled in as I managed laundry, I had fully completed 1/2 of the quilting!  And my arm didn't hurt at all.  I decided that I had done enough and should "save" my arm for the retreat.  It was time to do some final packing and get lunch prepared anyway...
Dave surprised me and returned home to have a lunch date with me before I took off.  What a guy... I so deeply appreciated his act of tender love toward me!  I think I'll keep him.  😉 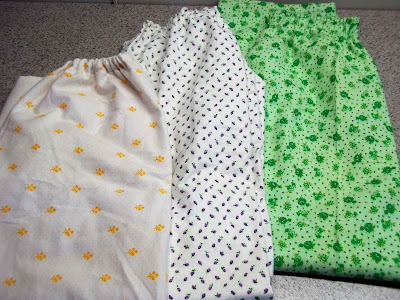 Last week I didn't get to the slippers that I had wanted to make...  But I now have 3 new pairs of jammie pants... and good thing I had some new ones to wear to the retreat...  There was pajama parade and the quilter with the "cutest" jammies won a prize!  I didn't win a prize, but I DID proudly show off my green floral flannel pants.
here are This week's to-do list...
❧  Quilted slippers... I saved the soles of my previously worn-out and dirty pair of slippers with a plan to re-use them.  Wish me luck in adapting the pattern to make it work!  🤞

❧  Write the next story for the Pieces in the Garden sew along.  (Only two more rows in the quilt!)  I will also photograph the finished quilt... if the wind ever stops... or even slows.  (The gusty wind is, once again, obnoxious.) 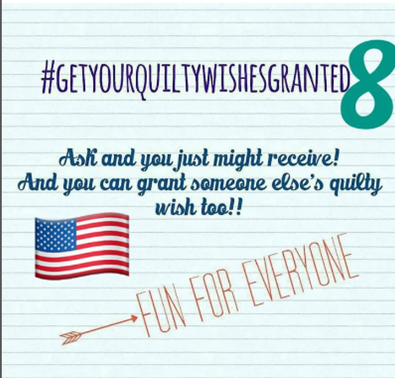 While scrolling on instagram, I came across a hashtag "campaign" for quilty wishes... This is the first time I have seen or heard of such a thing.
I will be granting a request for some black & white scraps and found a nice set of Maureen Cracknell fat quarters that someone was offering.
I have several panels that I will be putting up soon...
I saw one long-arm quilter wanting to gain some practice time request any quilt tops that were no longer wanted so that she could practice and then donate to a charitable organization.  Several have requested specific colors for hexies or scrappy quilts...
If you could make a quilty wish, what would it be?
Leave a comment... I'd love to hear your wishes!  Maybe I'll even be able to grant one or two.
Keep Piecing!
Melva
Linking with:
To Do Tuesday at Texas Quilt Gal
Mid-week Makers at Quilt Fabrication
Wednesday Wait Loss at The Inquiring Quilter
Thank Goodness It’s Finished Friday
Posted by Melva at 10:07 AM