“Bride’s Quilt”
Once upon a time, there was a little girl, who wore a bow in her hair. When she grew up, she began a friendship with a young bachelor. As the hours and days passed, they began to look at each other with stars in their eyes, and as their love grew, they thought about taking steps to the altar. So, the young girl got out her spools of thread and made clothes to get ready for their wedding ring day.
After they are married, some of their times together will be bright as noon and others will be dark as night.  But they will try to share their happiness, their miseries and their chores – she grabbing a wrench to help with household repairs and he grabbing a towel to help with the dishes.  Sometimes they will have broken dishes, but they will try to remember that “things” can be replaced, whereas harsh words, possibly spoken about the broken dishes, could chip away love.  They will try to follow the Golden Rule as they are learning to communicate openly with each other.
They will also try to keep in mind the symbolism of Jacob’s ladder – “steps of communication” between themselves on earth and God in heaven.
*********************
There were several mentions of the China that Tressie painted in the Teatime stories and today Tressie tells of attending art classes...Won't you get yourself a cup of tea and join us? 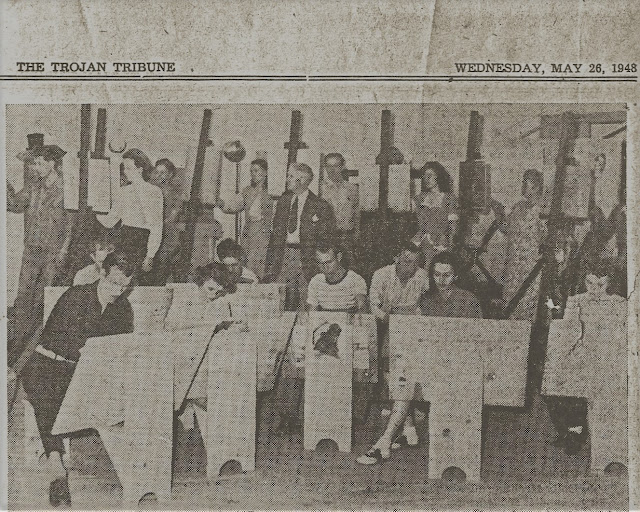 We lived on the corner of Prospect & Park Streets (in Trinidad), across the street from the (Trinidad Junior) College.  There were evening adult classes in all kinds of subjects.  Mom called me one day and asked me if I would take her to Mitch's (Arthur Roy Mitchell) art class and she would pay my tuition ($5 per quarter).  We both went to class.  The class was in the main building (the Berg Building) on the left side of the hall.  It was a large room.  There were easels and benches with a drawing board, which could be adjusted.  Mitch would set up still life settings on a large board with stand.  He usually had Indian rugs, pottery, jugs, candles and all sorts of stuff set up to draw and pain.  Carol came from Centennial School and Mitch would help her too.  One picture we were painting was an Indian rug and a large black Indian water jar with dried desert foliage (chimmesa) and also an Indian rug with an animal skull. (Tressie is the woman standing on the left in the white blouse). 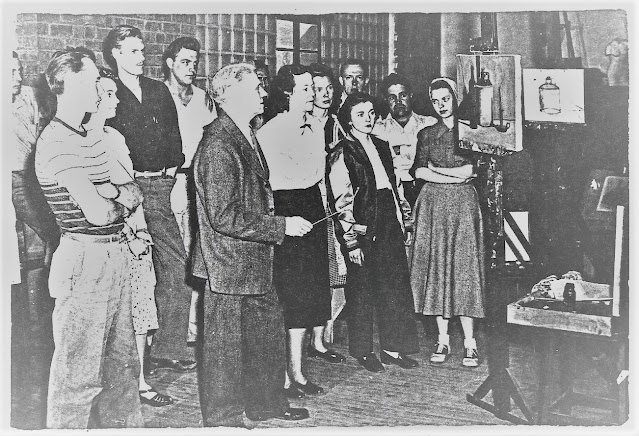 A.R. Mitchell is the teacher, holding the pointer, critiquing her painting.
Tressie (in the white blouse) is to his left.
In our back bedroom (in Tucson) is one of the paintings.  It is a large (brown) jug, candle and holder in blue-green and a tall green bottle and dark shadows on the back wall.  Mitch took the class to different locations to paint.  One was Foster Stagecoach Stop, north of Trinidad.  One was at a large red building just out of city limits.  I think it was a foundry.  Another day we went north and painted looking back at Fishers Peak and a ridge of one of the hills closer to us.  One day we drove up west (toward Stonewall) and painted by the Picketwire River with blue water, brown bank and a grove of trees further on. 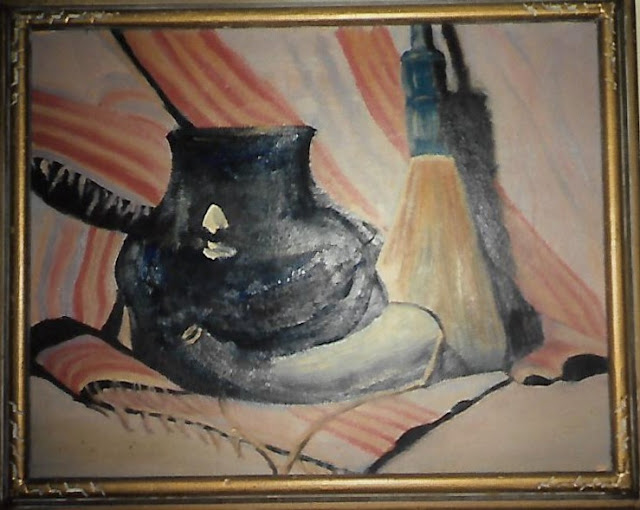 One day in Mitch's class I was painting the setup of the large black pot.  He said, "hit it once and make it sing."  He meant the rim of the pot needed a highlight.  The highlight sure added beauty to the painting.
The college was building some new buildings (1947) and the art class was moved to a red brick building just below the main college building (the Mullen Building) with an entrance on lower Pine Street.
One picture we did was at the Pioneer Museum (Kit Carson Museum) on East Main Street, near the White Spot Restaurant... A light grey house with a front porch.  We painted Kit Carson's coat and a wooden Indian that had been placed on the front porch.  We painted lots of Santa Fe Trail stuff and Indian relics. 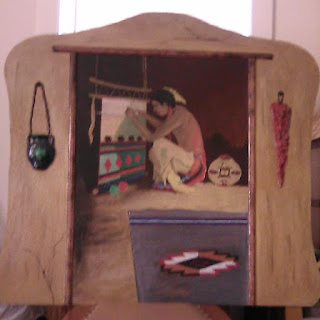 Emma and Tom Bradly took care of the museum.  Emma also taught artwork.  She worked with clay.  We pasted a picture on plywood and then put clay and stipple around the pictures - trees, flowers, etc.  I was painting blue flowers in Shakespearean's blue woman's house and Emma told me "Don't paint them solid blue but different shades of blue and little bit of other colors."  We made tree trunks and shaped the flowers with clay.  Shown here is a sample of the type of artwork with clay.
Tressie earned her Associates Degree from Trinidad Junior College in 1955 (the same year their son, Forrie, graduated from Trinidad High School.  She went on to earn her a Bachelor of Fine Arts from the University of Arizona in 1983 (the same year that I graduated from high school). 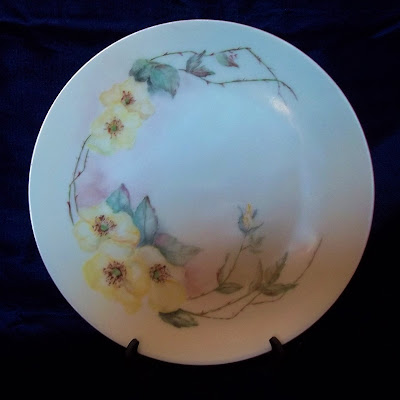 Tressie was an avid china painter and was a part of the China Painters Guilds in Santa Fe, New Mexico and Tucson, Arizona.  She learned china painting from Mrs. Kissick in Trinidad.
This plate is the first piece she painted...
She painted thousands of pieces... from ornaments to small trinket dishes, pins and necklaces to large vases, cups, and full fine-china place settings... and everything in between!  And as was mentioned by Kim & Wendy, she never sold a single piece. 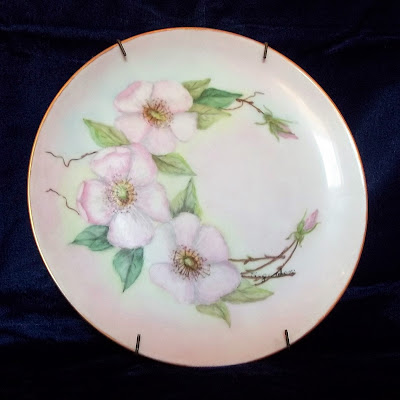 This is one of the many plates she painted before her skill began to decline.
Below is a photo of the last plate she painted... 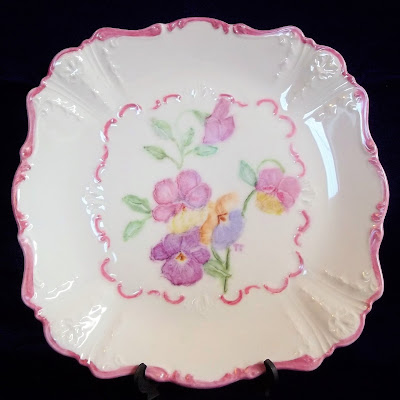 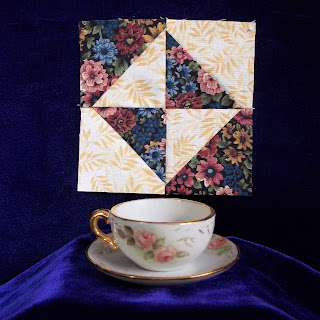 Along the way through life we have all encountered broken dishes...  you can cry over them or clean up the pieces and move on.  Trust me... I have cried over a few of the special hand-painted dishes that have been broken over the years. Tressie even graciously replaced a few of the broken items for me (and others).
I like to use the dishes and items that I have... Yes, they are special.  Certainly, I don't want them to get broken, but protecting them in the cabinet where their beauty cannot be shared with others is just as big a travesty as having them broken.  Life is too short to not use the fine china or good silver or towels... or a beautiful heirloom quilt.  Pull them out and use them and share the memories behind them with others.  Take lots of pictures so that even if broken or worn out, you still have a tangible something to remember them by.
Do you like to use your "special" items... or do you "save" them for a special day?
None of us know what tomorrow will bring... and by using something special such as the fine china or a fancy wine glass TODAY makes TODAY special!
Grab the free Broken Dishes pattern (free until December 8th) and get your 12 blocks made.  Be sure to come back to link up for a chance to win a prize package from Cornerstone Tea Company!  Stephanie is offering 20% off with the discount code of CHINAPLATE... valid through December 7th.
Leave a comment... I'd love to hear from you.
Blessings, 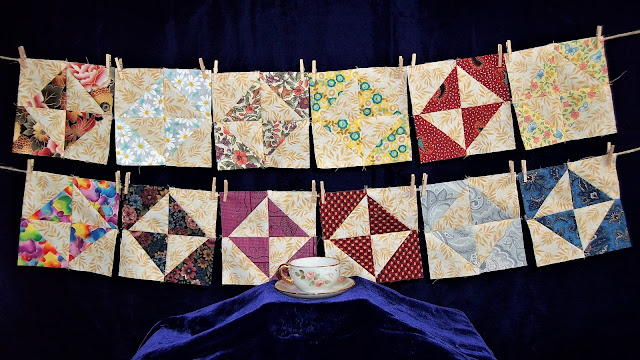 Linking with:
Needle & Thread Thursday at My Quilt Infatuation
Put Your Foot Down at True Blue Quilts
Can I Get A Whoop Whoop at Confessions of a Fabric Addict
Off The Wall Friday with Nina Marie
Brag About Your Beauties at From Bolt to Beauty
Peacock Party at Wendy’s Quilts and More
Friday Foto Fun at Powered by Quilting
Finished or Not Friday at Alycia Quilts
m
Posted by Melva at 12:00 AM

Email ThisBlogThis!Share to TwitterShare to FacebookShare to Pinterest
Labels: pieces in the garden