Pieces From The Past - The Corner Star

Today's letter is from Gotthart Hauswald... son of Mase Hasuwald, the Postal Inspector that wrote to Phillip & Katie with Block #14 (The Owl Block) inquiring of how his son's health and general mood were when he was held at Camp Trinidad. 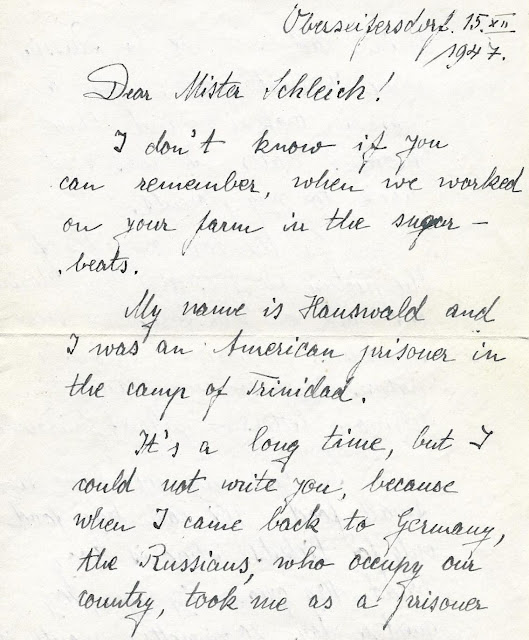 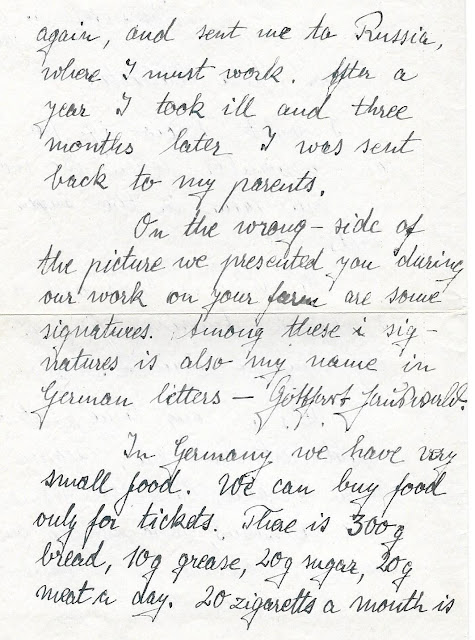 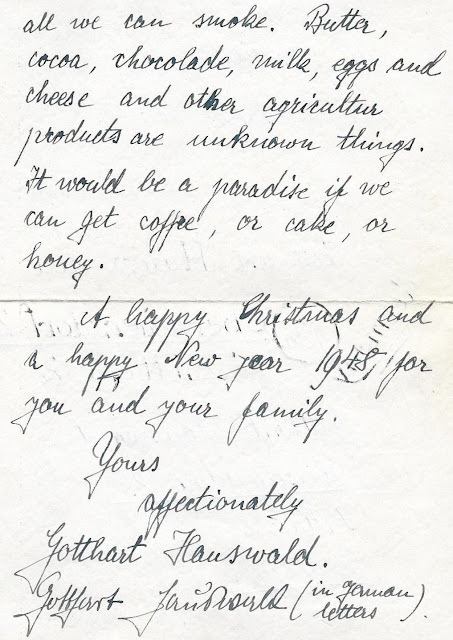 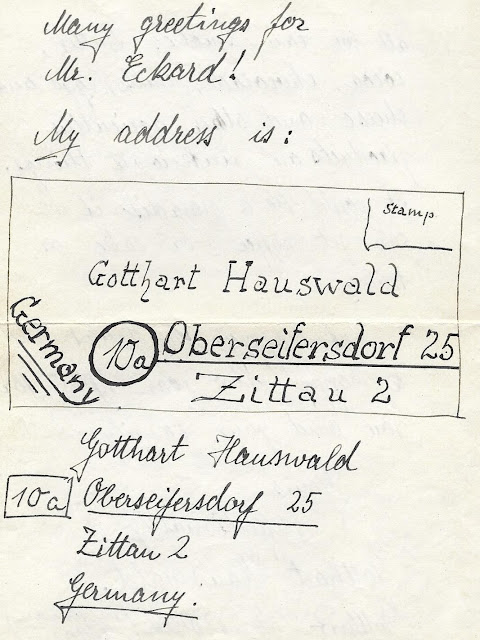 Oberseifersdorf
15-11-1947
Dear Mister Schleich!
I don’t know if you can remember we worked on your farm in the sugar beets.
My name is Hauswald and I was an American prisoner in the camp of Trinidad.
It’s a long time, but I could not write you, because when I came back to Germany, the Russians, who occupy our country, took me as a prisoner again, and sent me to Russia, where I must work.  After a year I took ill and three months later I was sent back to my parents.
On the wrong-side of the picture we presented you during our work on your farm are some signatures.  Among these signatures is also my name in German letters – Gotthart Hauswald.
In Germany we have very small food.  We can buy food only for tickets.  There is 300 g. bread, 10 g. grease, 20 g. sugar, 20 g. meat a day.  20 zigaretts a month is all we can smoke.  Butter, cocoa, chocolade, milk, eggs and cheese and other agriculture products are unknown things.  It would be a paradise if we can get coffee, or cake, or honey.
A happy Christmas and a happy New Year 1948 for you and your family.
Yours affectionately,
Gotthart Hauswald
Many greetings for Mr. Eckard!
The harsh conditions that Mr. Hauswald endured as a prisoner of the Russian's must have been horrendous!  And the fact that he was forced to work until he fell ill and could no longer work is awful. I have a better understanding of his father's concern for him and realize that he is probably very lucky that he was released prior to his death.
Notice that more than two years following the end of WWII the residents of Germany still received rations.  In the United States rations were eliminated by the end of 1945, with the exception of sugar, which continued until June of 1947.  The rations that Mr. Hauswald outlined were as follows...
300 g. bread = less than a pound;
10 g. grease = only .35 ounce (about 1 tablespoon);
20 g. sugar = less than an ounce, .70 ounces to be exact;
20 g. meat a day - the same as the sugar... less than one ounce a day!
20 cigarettes a month.
How interesting that cigarettes were available through rations.  Of course, they did not yet know or understand the extent of the health implications associated with them.
As I consider the impact that Phillip and Katie had on these men, these men equally impacted the lives of my Grandparents, my Dad, and his siblings.  I remember as a kid hearing about the POWs and how the men would sometimes fight each other to get to go to the Schleich farm... and how the men that DID get to go to the Schleich's might keep a "badge of honor" on their shirt collar, such as powdered sugar from one of Katie's home made doughnuts.  It just makes me smile. 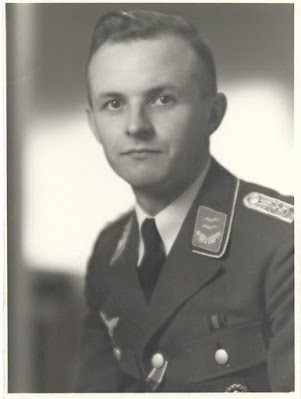 The pride that Phillip and Katie felt by being able to help these men in a very small way while held as prisoners at Camp Trinidad - making them comfortable and offering a feeling of safety while on the farm - must have been met with feelings of great disappointment with each letter requesting help in knowing that they were simply unable to do so.
The inscription on the back of the photo reads
In memory of Gotthart Hauswald, German Prisoner of war.
Germany
Christmas 1947
When I read this inscription my heart sank in thinking that he must have died, but then I quickly realized that he himself had penned the letter.
But I wonder... did Gotthart, or any of the other men, recall the Christmas seasons that were celebrated while a prisoner at Camp Trinidad?  The following accounting of a Christmas celebration, as told by Karl-Horst Heil in his journal and published by Kurt Landsberger in his book, "Prisoners of War at Camp Trinidad" may have come to the mind of many of these men...
December 19 -
"From the room next door we hear over the radio the song "Silent Night, Holy Night."  Nobody said a word and the song kept us in a somber mood, our thoughts were with the fatherland."
December 24 -
"I just returned from the Christmas celebration for our company.  It was  short but touching.  After all the electric lights were turned off in our mess hall.  Small candles on wooden stars made in our workshop lighted the room.  After the candles were lit on our Christmas tree, comrades from different locales spoke, some did poetry.  Chamber music was played, the choir sang 'Holy Night'."
"In front of everyone were two small plates with Christmas cookies, nuts, apples and a small fruit cake.  After our company commanders spoke we sang Christmas songs.  Walking to our barracks we admired the Christmas tree near the gate, but it looks even better during the day with the Rocky Mountain peaks (Spanish Peaks) behind the tree."
December 25 -
"Today breakfast was at 9:45 and lunch was at 13.00 - we ate turkey.  In the afternoon we visited each other;"
How many of these men, who thought being separated from their loved ones because of WWII was so very difficult, later longed for a return to Camp Trinidad for the simple comforts of life that we often, in our current time, take for granted...
A home with insulated walls and a roof over our heads as well as warmth offered by a furnace or fire place, a bed and pillow to lay our heads upon at the end of our days an the security of knowing there will be meals on our tables.
Many of us are turning our own thoughts to how different our holiday celebrations may look because of the corona virus this year... perhaps we won't be with our extended families, but that doesn't mean that we can't still celebrate and enjoy the season.
My personal feelings of the increasingly over-commercialized season for the last few years has seen us scaling back a bit.
We would rather spend an evening preparing and sharing a meal with friends than give a gift card to a restaurant for them to enjoy alone.
We would rather take the grand-children to a book store to pick out a book together rather than than just give them one to open.  I look forward to when our grand-daughters are just a bit older and being able to take them to the American Girl Place, just as we did with our own daughters! 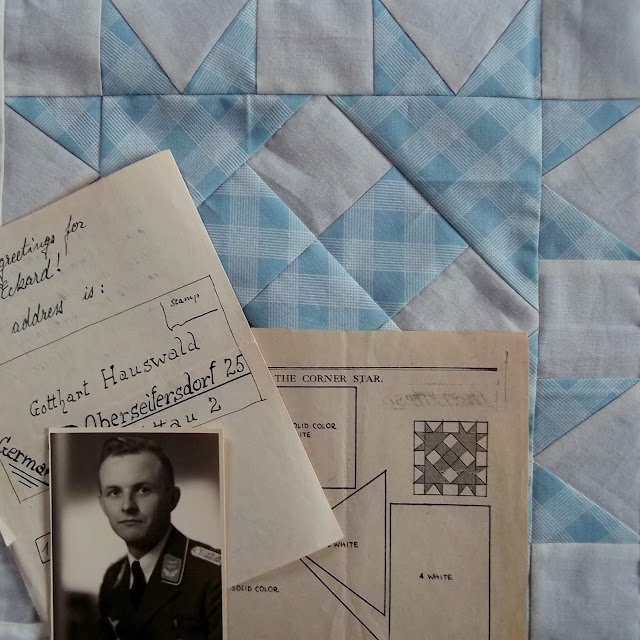 Well, that was a rabbit trail!  Back on track... The inspiration for the block that is partnered with this letter - The Corner Star Block - is from the journal - "Small candles on wooden stars made in our workshop lighted the room."
Now, go download the free pattern and get busy with this block.  This block includes some simple piecing and a little bit of paper-piecing.  You can do it!
As you piece, you will probably notice that the center 9-patch with the corners is larger than 8-1/2 inches.  This is not a problem...  Simply position your cutting ruler centered on the block and trim.  Notice in the picture of the block that the corner of the 9-patch is not a perfect point.  The points that matter the most are the outer star points.
Another tip I would make note of is that you need to be certain that page 2 of the pattern (the FPP templates) is printed at 100% (hint:: they need to measure 8-1/2" long).  If you need a refresher on how to do the foundation paper piecing, you can find help on the post for block #5, Our Country. 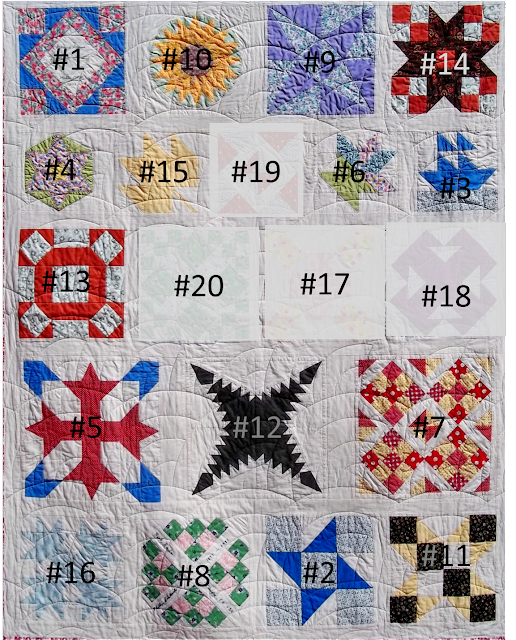 After the completion of Block #12 (Pine Burr Block) I gave detailed cutting instructions for sashing strips.
With the completion of your Corner Star block you can gather up these additional blocks -  #8 (Friendship Quilt), #2(Lost Goslin'), #11(Indian Star) - and assemble Row 5.
You will need three 2-1/2" x 12-1/2" strips.  Join the sashing strips between the blocks to complete the row.  Join Row 5 to the bottom of the sashing strip on Row 4.
But before you leave, tell me...
What are some of your favorite small gifts to make for family and friends?
I'll be making some small quilted coasters/decorations for our friends... something that can easily be tucked in with our Christmas card/letter.  They will be based on the Corner Star Block.  Details on these items will be coming soon!
Piece & Joy,
Melva

Melva Loves Scraps - Home of the Pieces From The Past Sew Along
that features vintage Kansas City Star quilt blocks!
Linking with:
Mid-week Makers at Quilt Fabrication
Wednesday Wait Loss at The Inquiring Quilter
Put Your Foot Down at For the Love of Geese
Needle & Thread Thursday at My Quilt Infatuation
Creative Compulsions at Bijou Bead Boutique
Can I Get A Whoop Whoop at Confessions of a Fabric Addict
Off The Wall Friday with Nina Marie
Brag About Your Beauties at From Bolt to Beauty
Peacock Party at Wendy’s Quilts and More
Friday Foto Fun at Powered by Quilting
Finished or Not Friday at Alycia Quilts
BOMS Away at Katie Mae Quilts
Oh Scrap! at Quilting is More Fun Than Housework
Sunday Stash at QuiltPaintCreate
Patchwork & Quilts at The Quilting Patch
Monday Making at Love Laugh Quilt
Design Wall Monday at Small Quilts and Doll Quilts
Scrap Happy Saturday at Super Scrappy
UFO Busting at Tish’s Wonderland
Posted by Melva at 12:01 AM