Sometimes we make plans and everything falls into place... and sometimes... we are taken for an unexpected ride.

We went for a detour ride (again) this week.

✔  Playmat quilt for our Great-nephew. 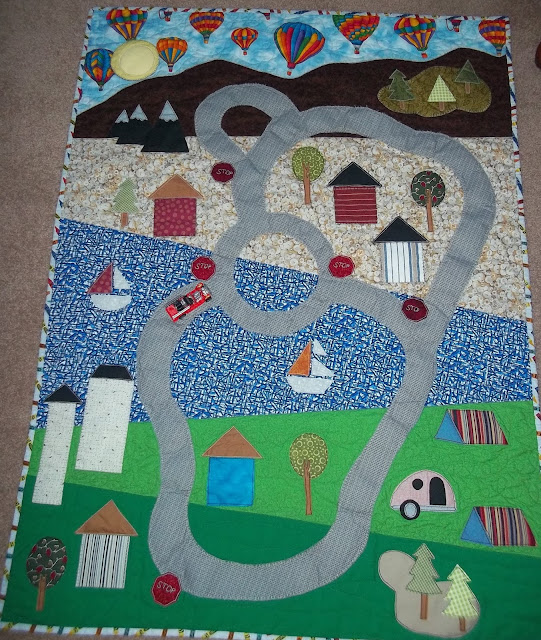 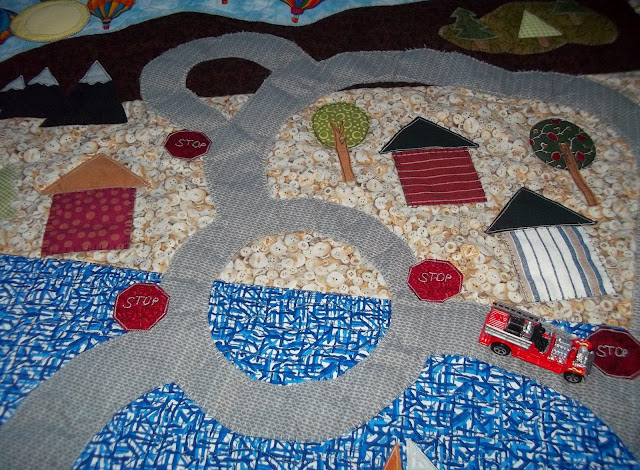 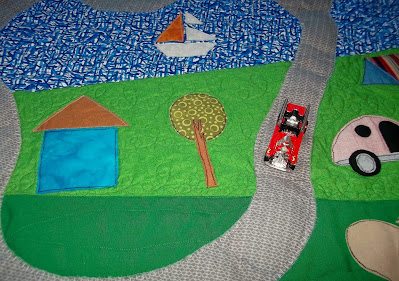 I had great fun creating the various buildings, landscape items and  more for this playmat.

The hot air balloons that help to form the mountain range is one of my favorite features.

I quilted waves into the water and added some loops to be like grass in the light greed and some rolling hills in the dark green.

Remember the pattern was free over on the JoAnn Fabrics webpage.

Now we just need to purchase some little cars, wrap them all up and ship them off.

That is where the the remainder of the list stalled.  Here's why...

A few weeks ago (on a Saturday afternoon) we received an unexpected call from a few of our Church's leaders stating that the newly appointed Pastor had resigned and that he felt that the Sunday Worship service needed to be cancelled. WHAT?  As Worship leaders we offered to add a few songs and extra prayer time, but agreed with the leaders that the service should NOT be cancelled. 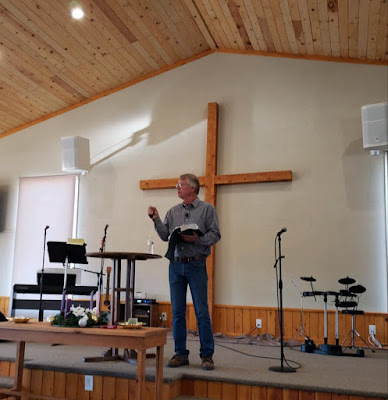 And while Dave was at it... he offered to give a brief message.  WOW!

All went well.  Well enough that he was asked to offer a message  for the following Sunday - the first Sunday of Advent.  Hours went into the preparation and it was all well received.

This was a detour!  The leaders were so impressed that they asked if he would continue for the remainder of Advent.

BIG DETOUR!  While a little surprised, we were not shocked.  However... MAJOR DETOUR, they asked if he would consider being the interim pastor.  Oh My!

We are currently "handling" it, being in constant prayer, but know that the reality of it being a long-term solution is unrealistic - for the Church and for us.  I mean... we have a business to run.  We also know that God works in mysterious ways, but we are both confident that it is not part of God's long-term plan.  As one of my friends stated, "For such a time as this" have we been prepared...

So... as we prepare for the third Advent Sunday we tread water and try to carefully balance our regular routine/work and all the extra "holiday" stuff AND navigate the detour.

So for this week I will pick up on last week's list where I stopped. 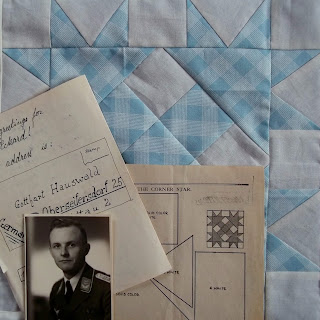 ❧ I want to create some small quilted Christmas Ornaments based on the current Pieces From The Past block - Corner Star - with plans to write about it and share a modified pattern for them.  I may not get as many done as I would like, but whatever I get done will be just fine  because they are just extras and I am not going to stress over them. 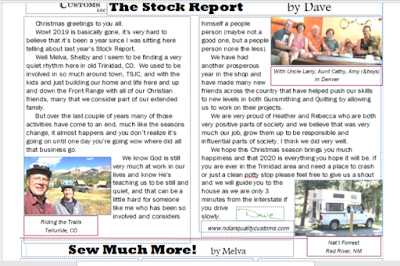 ❧ Annual family Christmas letter.  As I mentioned last week, our letter is unusual with each of us writing our own "column" - a tradition that started about 17 years ago.  As the girls grew into adulthood we had originally planned on having it in a new format that included just the two of us - but at what point do we "cut them out"?

As the family has grown with the additions of sons-in-law and grand-children, we thought that we would simply have to fill in with that news on our own because so many of the recipients on the list have known all four of us for all of the girls' lives.  But who better to offer an update on their lives than the ones living them???  So the tradition has continued...  Though it expanded from a standard page to legal sized, front and back.  And if the updates are not received??? I have a back-up plan that includes a pictorial telling of the year for them.  (This is not a new idea - I have had it in place for a few years since our oldest is a bit of a procrastinator and likes to submit right at the deadline.)

As "editor" of the letter I have issued a deadline for the updates - by this week's end, so that Dave and I can prepare envelopes for mailing this weekend and get the letter printed (and folded) on Monday morning.

The best laid plans don't always go as we would like, but sometimes the detour is a grand blessing.  Any thoughts and prayers for us as we navigate our way through the remainder of the Christmas season are deeply appreciated.

Melva Loves Scraps - Home of the Pieces From The Past Sew Along
that features vintage Kansas City Star quilt blocks!
Linking with:

To Do Tuesday at Home Sewn By Us
Mid-week Makers at Quilt Fabrication
Wednesday Wait Loss at The Inquiring Quilter
Put Your Foot Down at For the Love of Geese
Needle & Thread Thursday at My Quilt Infatuation
Creative Compulsions at Bijou Bead Boutique
Can I Get A Whoop Whoop at Confessions of a Fabric Addict
Off The Wall Friday with Nina Marie
Brag About Your Beauties at From Bolt to Beauty
Peacock Party at Wendy’s Quilts and More
Friday Foto Fun at Powered by Quilting
Finished or Not Friday at Alycia Quilts
Oh Scrap! at Quilting is More Fun Than Housework
Sunday Stash at QuiltPaintCreate
Patchwork & Quilts at The Quilting Patch
Scrap Happy Saturday at Super Scrappy
UFO Busting at Tish’s Wonderland
Posted by Melva at 7:24 AM