It has been weeks since I have spent any significant amount of time in my studio... not that I haven't been doing plenty with quilty projects.  The bulk of my time has been on the computer writing and researching for the last few stories for the Pieces From The Past Sew Along.

I had been stalled for three or four days and then last Tuesday the floodgates opened and my fingers flew over the keyboard.  The ideas flowed and I felt good about it... I hope that all of you will feel the same about what is to come. 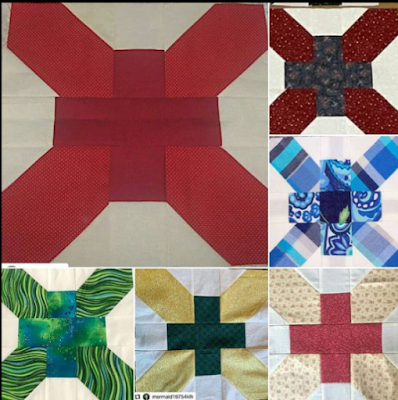 There are only three more blocks in the sew along.  How are you doing with them?  I saw that several quilters were catching up between Christmas and New Years.  Here are a few new ones. :)  I hope that you, like me, appreciate how unique and diverse the blocks are with the varied color selections, values and fabric styles.  My excitement grows with each block that I see and my anticipation of the finished quilts is ever-growing.  I think that my Grandma Schleich would feel the same... 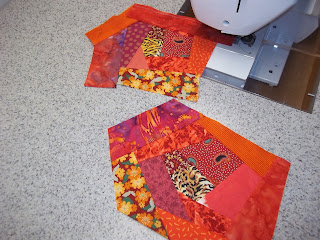 On Saturday I realized that while I had been doing quilty "stuff" on the computer, my creativity was waning.  I pulled out a couple of improv poppies that I had started in November and considered what I could do with them.
I drug out my overflowing scrap bin and found a variety of greens to create background fillers for the poppies, combined the 12 inch blocks with the giant poppy print that inspired these blocks, added a border and created a table runner.

The plan is to do some match-stick quilting on this runner and then a scrappy border with oranges and red-oranges like I included in the poppies.  I'll add a pop of green and a tiny bit of purple like the giant print fabric has.
That was my plan... but before I could implement said plan I was distracted with a DrEAMI project.  You know... Drop Everything And Make It.  I was scrolling through social media and came across this post...
"from a dad rocking his baby and thinking about the crazy things that have happened in our country".  And I was quickly reminded of a painting of a little white chapel I had seen last year. 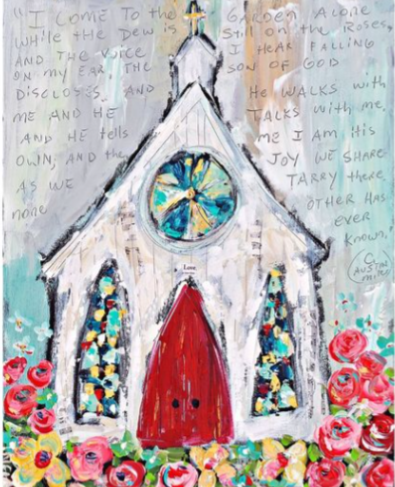 Don’t feel sorry for or fear for your kids because the world they are going to grow up in is not what it used to be. God created them and called them for the exact moment in time that they’re in. Their life wasn’t a coincidence or an accident.
Raise them up to know the power they walk in as children of God. Train them up in the authority of His Word. Teach them to walk in faith knowing that God is in control. Empower them to know they can change the world. Don’t teach them to be fearful and disheartened by the state of the world but hopeful that they can do something about it.
Every person in all of history has been placed in the time that they were in because of God’s sovereign plan. He knew Daniel could handle the lions den. He knew David could handle Goliath. He knew Esther could handle Haman. He knew Peter could handle persecution. He knows that your child can handle whatever challenge they face in their life if they trust in Him. He created them specifically for it!
This was where, again, the ideas started flowing!  I NEEDED to recreate this painting in fabric... 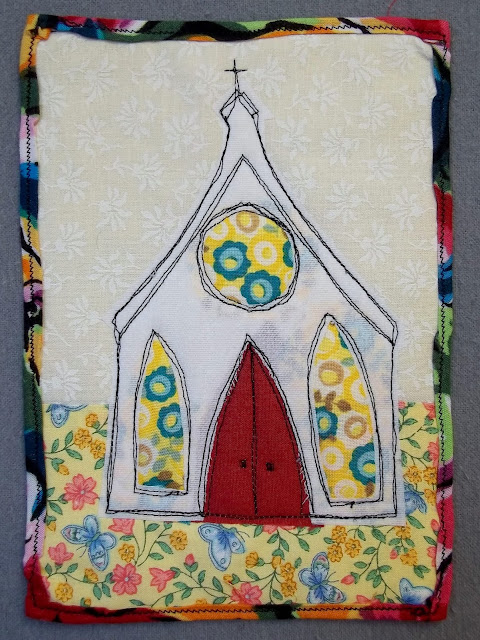 In just a few hours this sweet, tiny (5"x7") hand-sewn hello postcard quilt was done.  After practicing for so many years to have accurate and straight seams, trying to create a rustic look with the black stitching was probably the most challenging thing about this DrEAMI project. LOL!  I thought that a more rustic look to the binding would be appropriate. 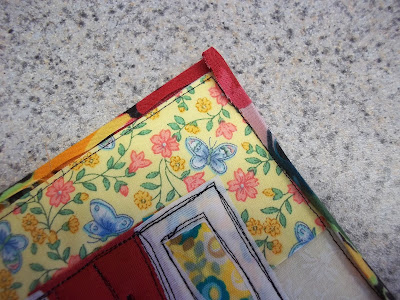 Here's a peek at how I did it...  I cut the backing piece a little larger than the postcard, sewed it into place, and then folded in the raw edge.
I then folded it over and stitched it down. 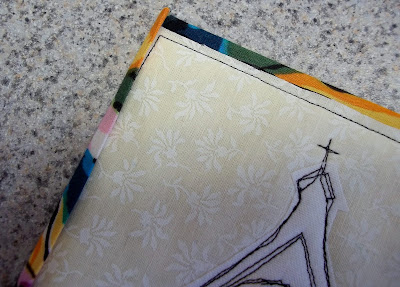 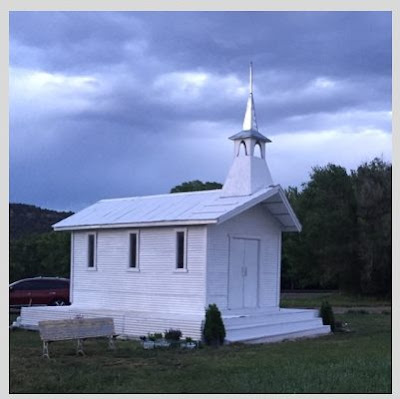 I think it would be a great little "series" of postcards from different angles or seasons.  There happens to be a small chapel down the road that would be a great "model" for the project!
I'll have to consider this... but for now on to my To Do List.
❧  Complete the quilting on the poppies table runner
❧  Choose a quilt pattern for a giraffe quilt for the new grand-daughter that is due to arrive in early May.
❧  Continue participating in the #31dayswithcottoncuts on instagram - Each day, post a picture related to the date's number. You can see all of my pictures by following the link above.
I'll be doing a little more research and writing to wrap up the current sew along, Pieces From The Past, but I'll probably be jotting down ideas for a new sew along featuring the Santa Fe Trail and stories from one of my ancestors, Marion Sloan Russell.  She traveled the trail numerous times, from Missouri to Santa Fe, in her life.  Her first was in 1852 at the age of 7.
Any suggestions for a name for the new sew along?

Leave a comment... I'd love to hear your suggestions.
Piece Out,
Melva

Melva Loves Scraps - Home of the Pieces From The Past Sew Along
that features vintage Kansas City Star quilt blocks!
Linking with:
Sunday Stash at QuiltPaintCreate
Patchwork & Quilts at The Quilting Patch
Monday Making at Love Laugh Quilt
Design Wall Monday at Small Quilts and Doll Quilts
To Do Tuesday at Home Sewn By Us
Colour & Inspiration at Clever Chameleon Quilting
Mid-week Makers at Quilt Fabrication
Wednesday Wait Loss at The Inquiring Quilter
Stitch Sew & Show at Life in the Scrap Patch
Posted by Melva at 3:32 PM