Not Much Quilting Going On...

I haven't had much time quilting lately... Oh, I have been busy with quilt-related projects, but not much time at my machine since I finished the Scrap Dance Minuet, 2019 Color Challenge and A Time For All Seasons quilts. 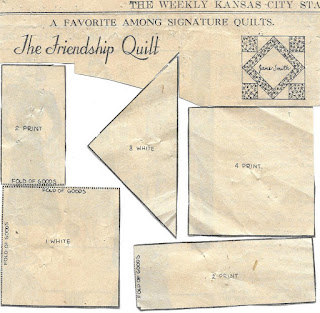 What HAVE I been doing???  A lot of pattern writing for the Pieces From The Past Sew Along.  Because the patterns are vintage Kansas City Star patterns that offer only templates for the blocks, not cutting sizes or assembly directions, ( sometimes they allow for the seam allowance, but often times, not) I have been making the patterns more modern by offering cutting dimensions and assembly instructions.  It is my effort to make the piecing of the blocks an easy and enjoyable experience for everyone participating in the sew along.  I have about 10 of them ready to go and could use some help testing them and proof-reading them.  Interested?  Leave a comment and be sure to let me know how to contact you via e-mail.

By the way... the first block - The Signature Block - is still available and the second is scheduled to be released on Thursday - February 13th.

There is nothing more frustrating than having a block that doesn't come together right, or end up the correct size.  One of the biggest challenges I had was figuring out if the template printed in the paper actually measured 2-3/4" or should it be 2-5/8".  Some of the pieces really are unusual sizes.

One other thing I could use some help with is translating a church record of some sort.  I believe it is in Russian and am curious about what it says.  Again, if you are willing to help me out, leave a comment and way to contact you.

Moving on.... Last weekend I was supposed to be away for a "girls weekend"... it was to begin late Friday afternoon... but it snowed overnight on Thursday and continued in the morning... and the roads were a MeSs! 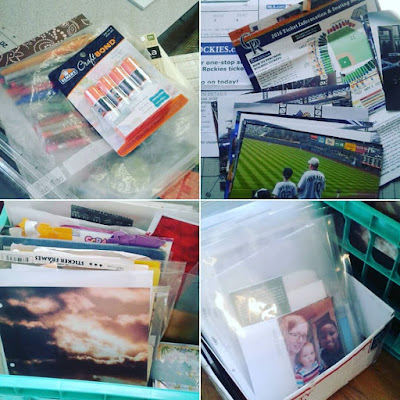 I had planned on taking my scrapbooking supplies and pictures to work on getting caught up by completing 2016 and 2017.  When the announcement of the delay arrived I decided that I would start scrapping then...

In just 3+ hours I had six months of memories assembled in a storybook fashion.  Yay!  Progress...

The next morning the announcement arrived that the weekend hostess would be ready for guests at the cabin by 10:30 a.m.  I loaded up my bags and eyed the mess of scrapping supplies spread out on the cutting table in my studio... Ummm... no that is not going to happen!

I grabbed my "go bag" of hand sewing projects that I had started for our upcoming road trip.  It consists of the National Parks Postcard blocks designed by Rachel Lee at Fiona Sandwich.

As seven of us that braved the sloppy road conditions and threatening weather forecast for more snow on Sunday enjoyed conversation, wine, laughter, snacks and meals for just 24+ hours I stitched... 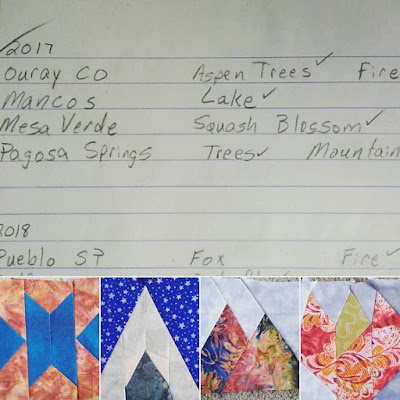 I completed the blocks needed for the first section of our Camping Journal Quilt - 2017.  It was the beginning of our love relationship with a truck camper.

We were actually only borrowing the camper from a neighbor to decide if we wanted to purchase it from them.  We spent a few days at a KOA Kampground in Ouray, CO, headed to the Mesa Verde area and then to Pagosa Springs.

I had several of the blocks already done and just needed to fill in a few blanks...

A Teepee, squash blossom, some colorful mountains with a grey sky and a campfire. 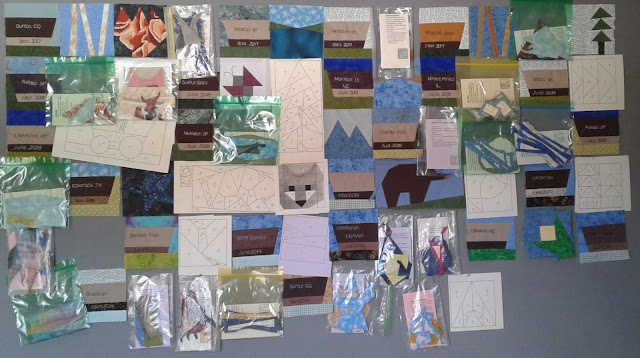 I can now assemble the first row!  I also have 16 other blocks in kits and another 8 that are ready to be prepared for the kits.  I love the versatility of these blocks as they can be used for various National Parks, as well as State Parks and camping in general.

So, as you have seen, there has been some quilting related stuff going on, but I just don't have much to show for it.  As I stated... the Signature block is still available AND you have a few days to link up for the give away drawing of the first fat quarter.  Go grab your pattern and head to your sewing machine.  It is a really easy (and quick block) that you can have done in about an hour.  Tag me in your photo on instagram and use the hashtag #PiecesFromThePast, share to my facebook page or email it to me - MelvaLovesScraps@NolanQualityCustoms.com if you aren't sure how to get linked up and I will take care of it.

What have you been up to?
Leave a comment... I'd love to hear from you!