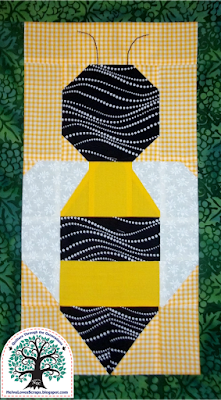 The fourth and final Save The Bees block by Jacquelynne Steves has been completed and they are all ready to be assembled as a quilt next month.


As I mentioned in last month's Save The Bees post, I am a tea drinker and prefer to sweeten my tea with honey.  So I have really enjoyed these blocks. 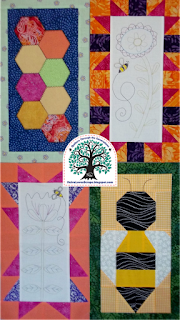 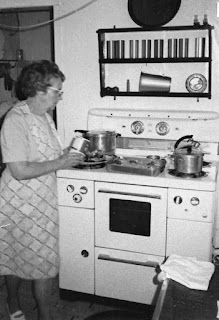 As a young girl I remember visiting a Great-Aunt, "Auntie Bob" who lived in Stonewall and hearing about the beehives that her husband used to have (he had passed away before I ever had the chance to know him).  She was an excellent cook and baker and would regularly bake pies to sell at the small store located across the highway from her house.

Auntie Bob's given name is Viola, but when her youngest brother, Forrest (my Grandpa) was learning to talk, he couldn't pronounce Viola... it came out something like "Bi-O-Ba" and eventually everyone called her Bob.  My Mom spent much of her childhood with Auntie Bob and Uncle Ollie...

Mom's memories varied a little from her brother's memories of Uncle Ollie's beehive, but here is a blend of what they recall...

"Uncle Ollie’s beehive was about 36 inches high, by about 18 inches wide.  It was on the back side of the house to the west.  It was a little south of the brooder house and under some tall pine trees.

The honeycombs were about 6” x 1” and were in some kind of tray you pulled out of the hive. Uncle Ollie wore a big hat with a mesh over it.  The bees collected nectar from the blooms from the hay field.

Uncle Ollie usually gathered the honey in the fall. Auntie Bob was never too far away waiting with the bluing bottle to dab the bluing on a bee sting.  The bluing took the sting out of the bite. 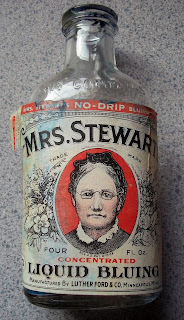 Bluing was a laundry product used in the rinse cycle of a load to make the whites appear brighter.

It has many other uses besides laundry... and it is still available for purchase!

The honey they collected was for their own use.  Auntie Bob would set a honeycomb in a dish and let the honey drain out.  It was slow to drain."

Did you know that when a beehive is invaded by an outsider, the bees protect the hive by stinging the invader to death?  If the remains are too large to remove, they begin to cover them with layers of wax, so thick that the features become blurred and difficult to distinguish... The intruder becomes a lasting part of the hive!

Do you know any tidbits of info on bees?


Leave a comment to let me know or share your thoughts on the block.  I'd love to hear from you!

Melva Loves Scraps - Home of the Quilters Through The Generations series
Posted by Melva at 3:00 AM

Email ThisBlogThis!Share to TwitterShare to FacebookShare to Pinterest
Labels: Save The Bees