Wishful Thinking - It's A "Wild" Life 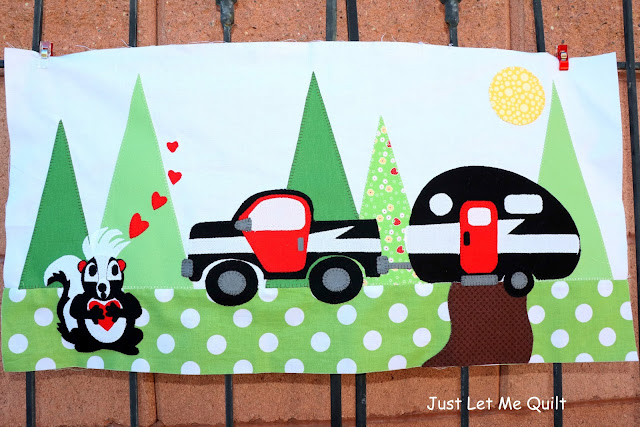 I giggled when I saw this block designed by Carol at Just Let Me Quilt... Then I looked at it to try to figure out how to avoid aaaaaaaaaaaaaall that applique.  I considered paper piecing the trees but then told myself "just do the applique"!


As I pulled fabric for the block I remembered that as a child we had an old hay wagon where my dad stored old lumber from various projects.  My brother once discovered a whole family of skunks living under it.  The babies were sooooooo cute!  We begged mom to be able to capture one and have the "stinker" removed and keep it as a pet.  My parents refused, even though they thought they were cute as well.

We wanted to name it "Flower" just like in the Disney movie, Bambi.  But as with all "babies" they don't remain babies.  My brother was assigned the task of "removing" the family.  That is all I am going to say about that.  Well, I will add, that he never ended up smelling of skunk, to my recollection!


Once I got the sky, ground and trees done, I was less than enthused to begin the truck & trailer... and then I saw the "love" fabric sitting on the cutting table in the midst of the other black and white fabric I had pulled as options for the block.  It was at that moment that I decided that it was exactly what I needed for the truck and camp trailer!

Love was in the air!!!  I, for one, am grateful that the stench of a skunk is NOT in the air. 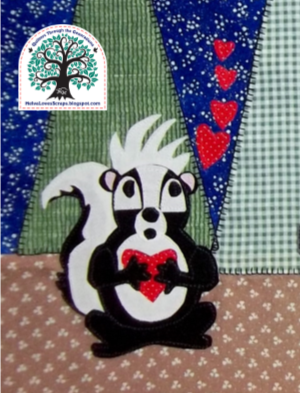 While Dave and I were still living in Illinois, one evening as Dave was returning home from work and our Yellow Lab, Samantha, ran across the yard to greet what she thought was our cat, Dotty.  Dave quickly realized that it was NOT Dotty. 😞  Rather, it was... you guessed it... a skunk!  I imagine that the look on the skunk's face was one of surprise... just like this one >>>

It was the middle of the winter so we couldn't simply leave her outside.  Though she really did love her dog house and kennel and would often prefer to "go to bed" outside rather than stay in the house.


We took her into the basement where there was a bathroom with a shower.  We proceeded to use tomato juice and strawberry scented shampoo to try to neutralize the awful odor... it didn't really work, but it was certainly better than doing nothing!  I think...

For months afterwards (until she shed her winter coat) whenever she went hunting and retrieving in the Fox River or on the private pond where Dave hunted ducks and geese, she smelled the odd combination of tomato and strawberry.  It was a little gross...

This was before our knowledge of using baking soda, hydrogen peroxide and dish soap to remove the odor.

More recently our Chocolate Lab-mix, Shelby, dashed across the yard after a cat... Dave thought it was a cat, anyway.  (We have never allowed her to chase after rabbits or cats in our yard.)  As soon as Dave realized what she was doing he yelled for her to stop.  And for once she listened!  We managed to coerce her into the house while he grabbed something to "manage" the situation.

(I know, I know... this is not kosher to do in town, but we don't live in town and who really wants to worry that such a stinky creature is roaming in your neighborhood?  Animal control doesn't respond to such calls in the county... you just take care of it.)  He was able to handle the situation without setting off a 'stink bomb'... My Hero!  We actually believe that the animal was sick and could have been a threat to the pets in the area.

Well, there you have it.  My skunk stories...

Have you had a close encounter with a skunk?

Keep calm and quilt on,

Melva Loves Scraps - home of the Quilters Through The Generations series