Quilters Through the Generations - Carol Schleich

As part of the Through the Generations series, I introduce you to my Mom, Carol Schleich. 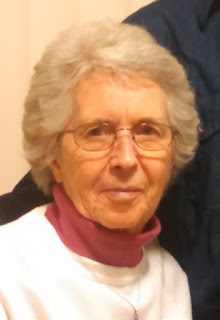 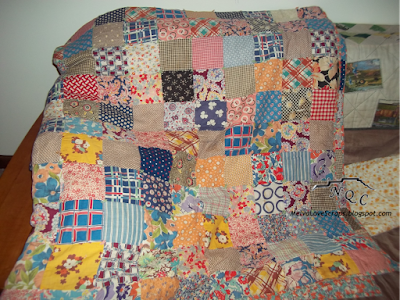 A comforter is made out of squares sewn in strips, and usually had a sheet blanket (made of flannel) in addition to the batting for extra warmth in the winter.  This comforter was made by my Paternal Grandma Teegarden, Lala, in the late 30’s or early 40’s.

For each birthday, as well as Christmas Grandma T.  would give a gift of  pajamas to everyone.  She then used the scraps to create the comforters.  Every family member would eventually receive a comforter as a gift.   The one pictured above was given to Forrest and Tressie Teegarden - my parents. 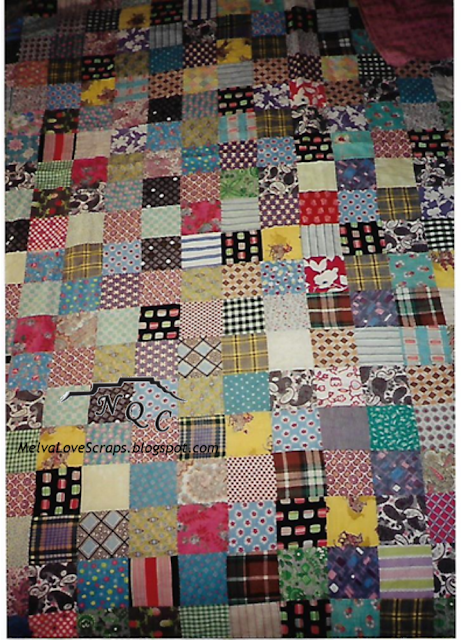 This is my comforter that Grandma made me for Christmas when I was 10.  Grandma taught me to sew on her treadle machine when I was ten.  I sewed rows and rows of blocks together.

Lala was very active with the Christian Church Quilters as well as other social groups.  Here she was featured in the local (Trinidad, CO) newspaper in May of 1916 (more than 100 years ago!).... back when they reported on social events and not just news stories that emulate the drama of current times...


You should take note that "tacking comforters" is referred to in this story...

Here is Carol with her Grandmothers - Lala (left) and Myrtle (right) - 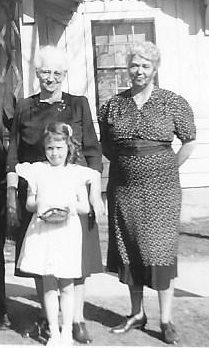 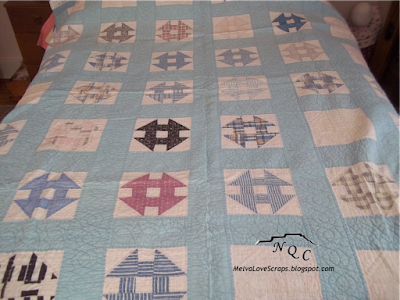 Lala Teegarden made this quilt for me in 1948 for my 8th birthday. This is called Monkey wrench.

Tell me about your first quilt - 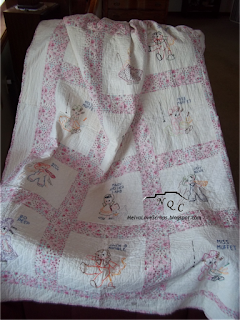 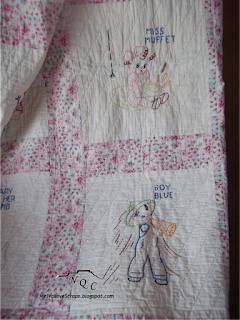 My first quilts were nursery rhyme quilts with  12-inch blocks that my Mom (Tressie Teegarden)  had embroidered.  She did two sets - one for you and for Kelvin (my brother).  I pieced them with sashing strips and machine quilted them. 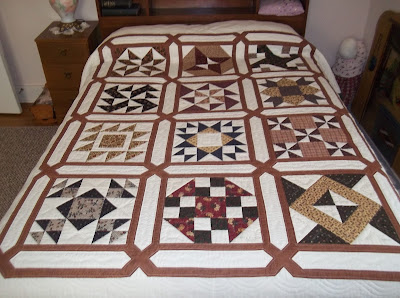 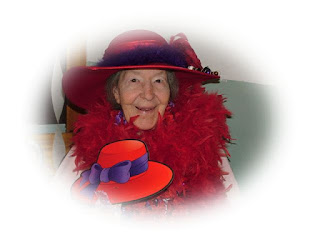 That was the end of my quilting for a while, until I moved back to Trinidad and my daughter, Melva got started in a block of the month club.  She did it one year, then the second year she invited my mother, Tressie Teegarden, (pictured above) and me to the club.  I pieced the blocks and then put it together with the stepping stone and path.  Completed in 2005.


Did your mom quilt? 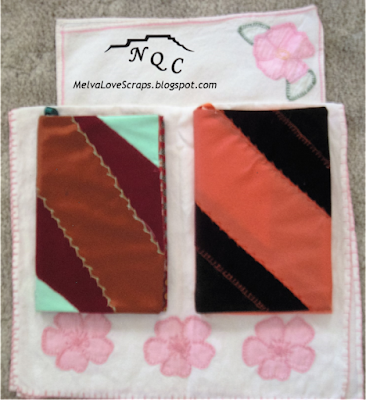 Yes, Tressie was taught to do hand sewing by her mom - Myrtle Werden.  She did all sorts of fancy seams and embroidery. She did lots of fancy things for her hope chest - pillow cases, dish towels, napkins, etc.

This applique heart quilt was made by Tressie Teegarden late 30’s early 40’s. It has the corner stones and path. It was quilted by Lala Teegarden. 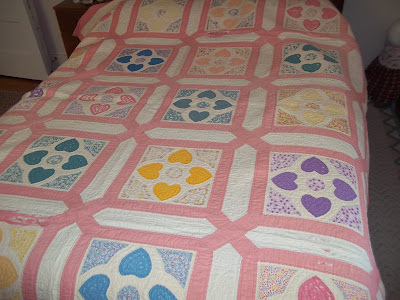 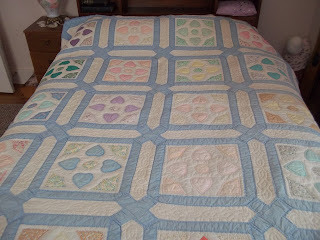 Years later Tressie pieced two more of them - sometime in the 80’s.   It also has the corner stones and path.  One was pink and one was blue.  She had a group of quilters in La Junta quilt them.  I chose the blue one and gave the pink one to my brother Forrest. 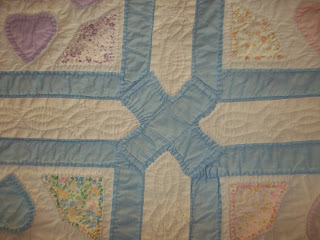 While Tressie's fancy hand stitches (and china painting) were exquisite, her piecing wasn't quite as precise... 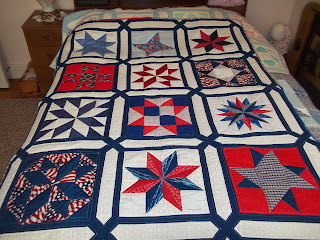 I made this Red, white and blue star quilt  for myself to curl up under on the couch. There are a few paper pieced blocks like the Mariner's compass in this quilt.  After making those blocks I decided that I don't like paper piecing.

My husband,Melvin, would use the Signature quilt that Melva had made from his mom's collection of blocks to cover up with while in his recliner in the winter... 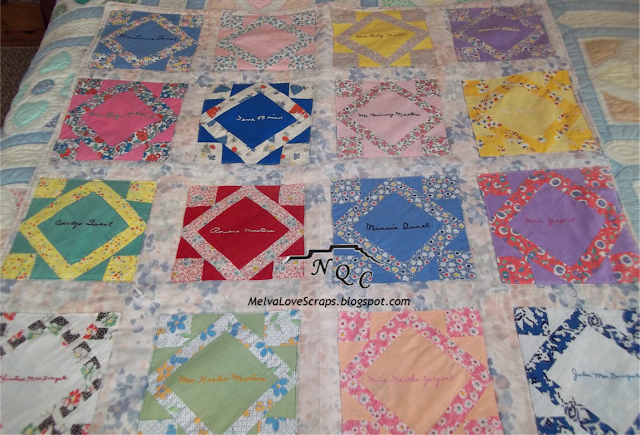 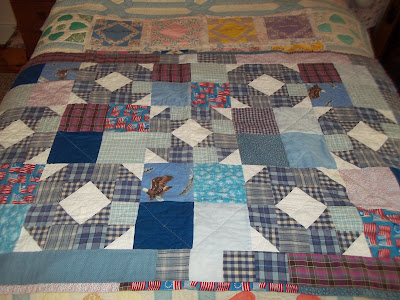 But after finishing my Red/White/Blue quilt he decided he needed something longer to cover him as he sat in the recliner, so I made  this scrappy quilt in 2009.

I made a couple of quilts for my Trinidad High School Class of 1958 reunions - Both were given to classmates through a drawing.  One was just a scrappy quilt pieced in the shape of a "T" and the other included photos of some of the area landmarks. 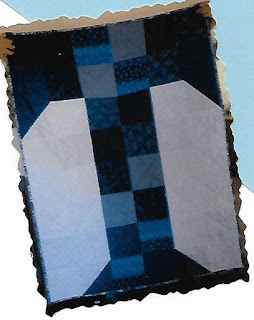 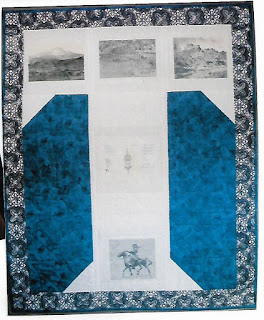 I may have missed a few, but I have helped with lots of quilts

Did your Maternal Grandma quilt? 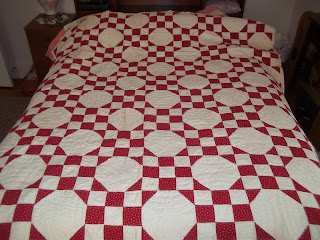 Yes, Myrtle Werden, pieced this red and white snow ball with a nine patch quilt, I would guess in the 1930's, but never quilted it. Somehow I ended up with it so I finished it with machine quilting.  I had it on our bed for many years.

It would seem that there may be a quilting gene...


Are YOU from a family of quilters?  I would be happy to share stories of YOUR family Quilting Through the Generations.  Simply leave a comment stating as such and I will email you a questionnaire. (if you are a no-reply blogger be sure to leave your email address in the comments)