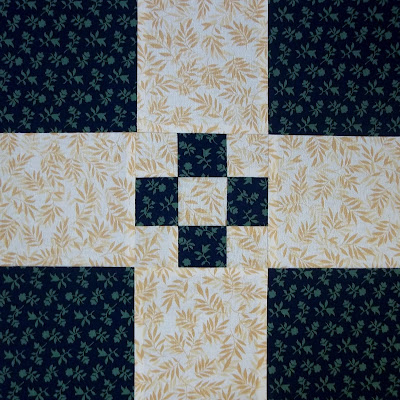 From the notes... Fort Snelling, first called Fort Anthony, was established in 1819 at the mouth of the Minnesota River - south of present Minneapolis and across the river from St. Paul - by Colonel Henry Leavenworth.  A post was established at the old French trading post of Prairie du Chien (Wisconsin) in 1816.  Both military posts played colorful roles in the history of the upper Mississippi Valley during the first half of the 19th century.
A Nine-patch block would have been among the first blocks that a young girl like Marian would have pieced.  But in such a short time of her childhood she had experienced so much... from the loss of her father to their move from Saint Louis to Fort Snelling with Mr. Mahoney and the closing of the two military posts.
A simple 9-patch block didn't feel sufficient to capture her story, so the Double-Nine block represents this portion of her life.  Imagine this block as the river and the islands the riverboat made its way past...
We passed many islands and wondered how the pilot of the threshing little stern-wheeler found his way through them.  In places there were so many islands that we had the illusion that we were sailing through a series of many little lakes.
NOTE:  It was brought to my attention that the pattern cutting directions had an error.  The single 1-7/8" square needs to be cut from the light (NOT the dark).  I have made the correction on the pattern.  Be certain that you make the change or that your pattern is noted as revised. 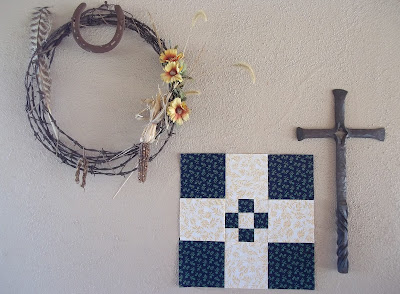 River boat dinner cruises were popular in the 80s and 90s.  We enjoyed several while we were living in Illinois.  The Port Edward's Sunset Cruise was always a fun night out on the Fox River both before babies and after (with out) our babies.  A time to get away and sip on a glass of wine.
When my parents would visit from Colorado, they would often travel via Amtrak.  Rather than pick them up or drop them off in downtown Chicago, we would drive to Joliet.  It took about the same amount of time to get there but without all the traffic!  Joliet had river boat casinos and we enjoyed a few "cruises" and dinner.  To call them cruises was really quite silly since they boats simply went up and down the Fox River for a short distance.
My sister-in-law and brother-in-law enjoyed a river cruise in Europe a few years ago... quite different from the river boats I have been on.
Have you been on a river boat?
Leave a comment... you know I love to hear from all of you.
Quilt Happy!
Melva
Don't forget to use the hashtags #PiecesoftheSantaFeTrail #PiecesoftheTrail #PiecesoftheTrailSewAlong and tag me on instagram @MelvaLovesScraps or share to my fb page Melva Loves Scraps
Be sure to come back and link up your block for a chance to win a fat quarter too!
No blog or social media accounts to link up?  No worries!  Simply email me at MelvaLovesScraps@NolanQualityCustoms.com with a picture of your block and I will do it for you.
Linking with:
Put Your Foot Down at For the Love of Geese
Needle & Thread Thursday at My Quilt Infatuation
BOMS Away at Katie Mae Quilts
Can I Get A Whoop Whoop at Confessions of a Fabric Addict
Off The Wall Friday with Nina Marie
Brag About Your Beauties at From Bolt to Beauty
Peacock Party at Wendy’s Quilts and More
Friday Foto Fun at Powered by Quilting
Finished or Not Friday at Alycia Quilts
Scrap Happy Saturday at Super Scrappy
UFO Busting at Tish’s Wonderland
Oh Scrap! at Quilting is More Fun Than Housework
Sunday Stash at QuiltPaintCreate
Patchwork & Quilts at The Quilting Patch
Monday Making at Love Laugh Quilt
Design Wall Monday at Small Quilts and Doll Quilts
BOMs Away at What A Hoot Quilts
Mid-week Makers at Quilt Fabrication
Wednesday Wait Loss at The Inquiring Quilter
Stitch Sew & Show at Life in the Scrap Patch