I recently spent an afternoon doing "playing" as I waited for the delivery of the flannel backing I had ordered for the latest commissioned t-shirt quilt.

My friend, Mark Montano, had announced a second postcard swap since his first was a resounding success and there were many that had missed it and wanted a second chance.

I had a new idea for postcards... quilted, of course!  I wanted to create some in the likes of the hand-sewn hello card I made in the World full of hearts post in April.

I chose some "words of wisdom" fabric.  Now, I'm not sure this is the actual name for the fabric and I have no idea who made it... but the words were encouraging words. 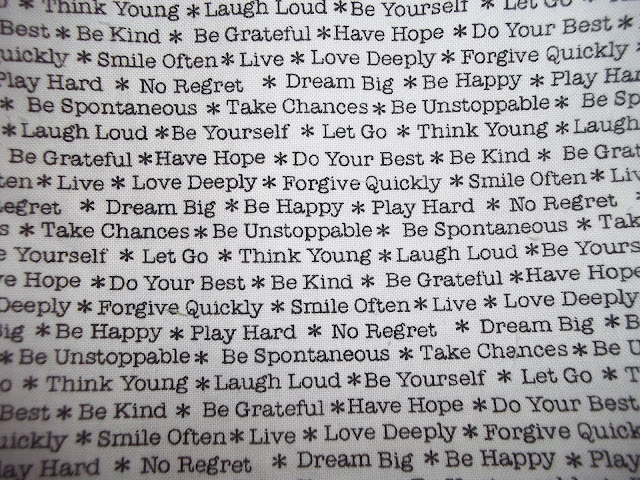 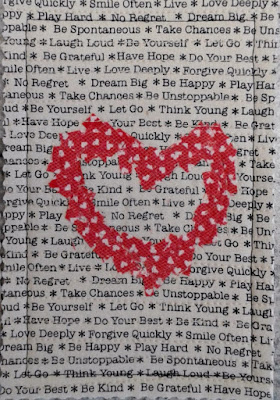 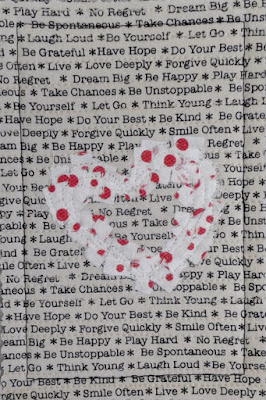 When I had used all of the encouraging words fabric I pulled out some fall quotes fabric.  Using orange and green confetti I made pumpkins... 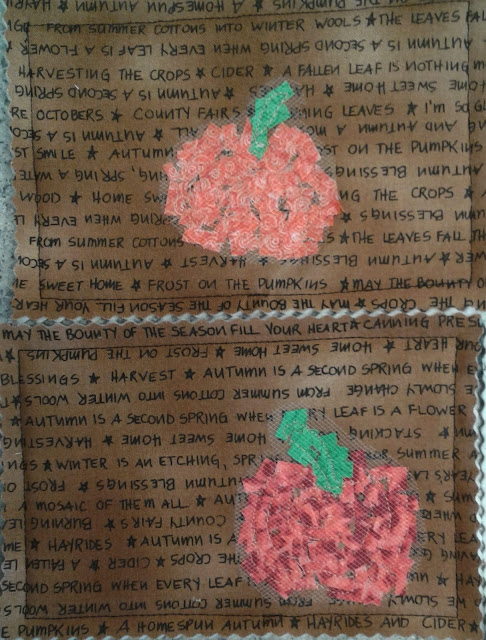 It was nearly time to call it a day and go make dinner so I grabbed a strip of leaf fabric and made two cards with banners... 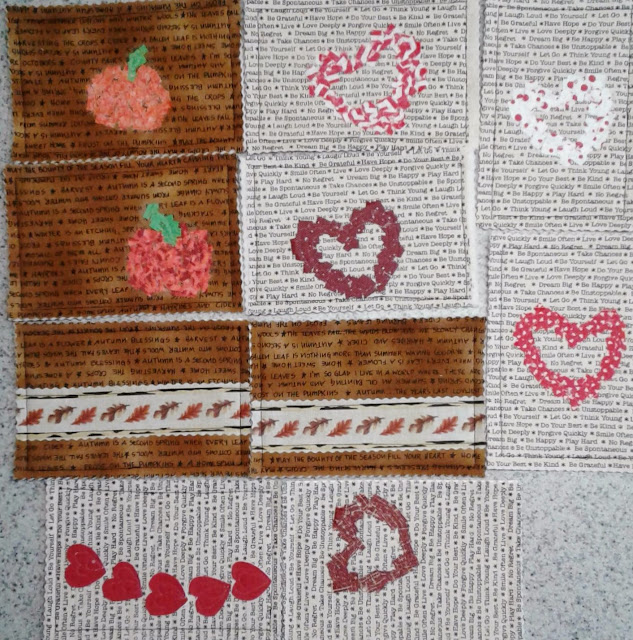 Last week was a very short week for me since we had taken a "holiday" with some friends at their family cabin (and then had grandchildren arrive for a two-night sleepover). 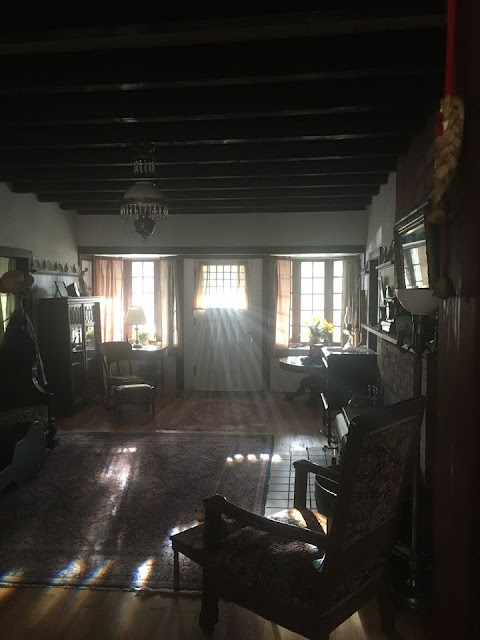 When you enter the house it is like taking a step back in time... the furniture and furnishings are of another era... a time of simplistic necessities and a sense that love, joy and laughter have filled this house to the rafters.

Upon our return home I quickly got back to the quilting of the t-shirt quilt since the backing had arrived.

I had prepped the binding ahead of time so it was ready when I was ready...

And now that it is complete, it is ready to be sent off to its new home. 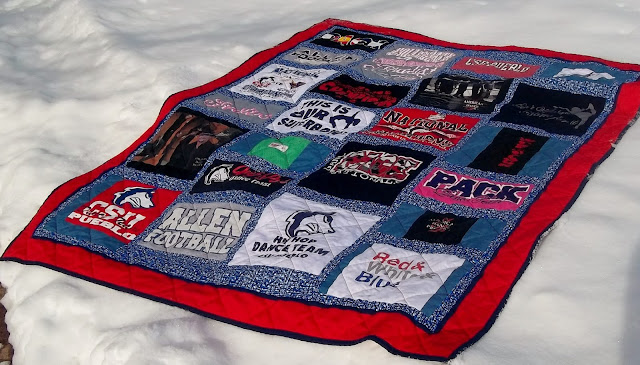 Block #14 of the Pieces From The Past Sew Along was published on schedule and I hope to see some of the Owl Blocks link up soon.  Have you grabbed your pattern yet?  The letter is short and the block is an easy one to piece.  Be sure to join the fun!

Since I completed the tasks I had stated two weeks ago...

✔ I'll be writing again... the next letter and pattern for the sew along will be published October 22.

✔ If the red flannel backing for the t-shirt quilt arrives, I'll be quilting that as well.

What do I have lined up for the coming week?

❧  I will be making items for the Operation Christmas Child shoeboxes...  I have fabric pulled to make shorts for little boys and skirts for the girls.

❧  Something else... not sure what, but surely there will be something that captures my attention!

I didn't even mention that we had to come up with costumes for a Harvest Celebration... We had a hunter, a rubik cube and a clown. 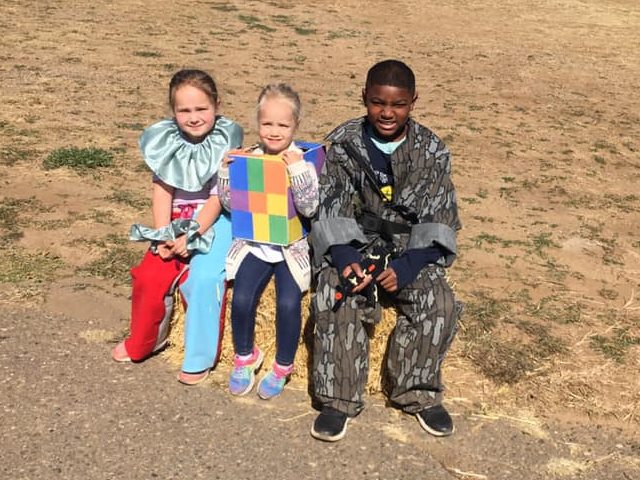 It is time like these that we never question why we keep something around... those clown pants utilized some flannel that is probably about 20 years old and a pattern that is pushing 50 years old.  LOL!

When was the last time you used something that has been hanging around for, what some would consider, way too long? 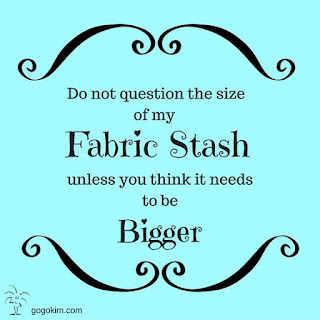 Melva Loves Scraps - Home of the Pieces From The Past Sew Along
that features vintage Kansas City Star quilt blocks!
Linking with:
To Do Tuesday at Home Sewn By Us
Mid-week Makers at Quilt Fabrication
Wednesday Wait Loss at The Inquiring Quilter
Oh Scrap! at Quilting is More Fun Than Housework
Sunday Stash at QuiltPaintCreate
Patchwork & Quilts at The Quilting Patch
Creative Compulsions at Bijou Bead Boutique
Can I Get A Whoop Whoop at Confessions of a Fabric Addict
Off The Wall Friday with Nina Marie
Brag About Your Beauties at From Bolt to Beauty
Peacock Party at Wendy’s Quilts and More
Friday Foto Fun at Powered by Quilting
Scrap Happy Saturday at Super Scrappy
Posted by Melva at 10:45 AM