The Piece From The Past That Started It All

When I look at names on signature quilts time stops in its tracks and I love to think of the lives - the men, the women, the children and all they were to each other and how the way they treated each other has reached out into our time with these same ripples, or fingerprints. 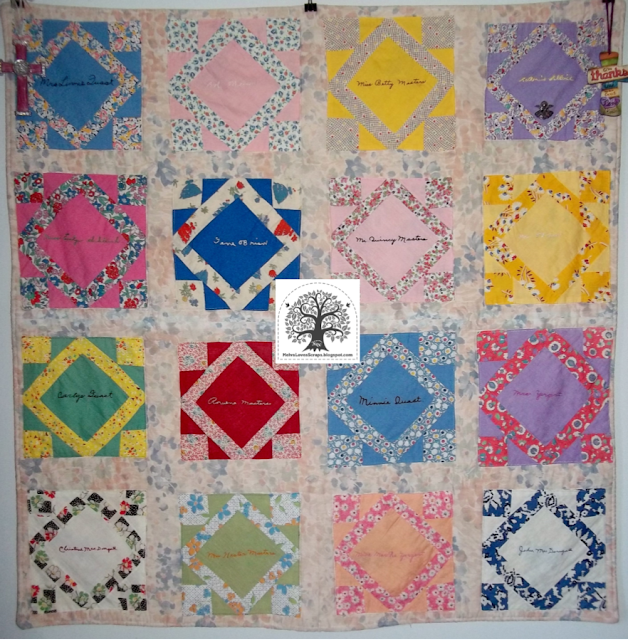 Make sure the fingerprints you leave are happy, loving ones. ~ Bonnie Hunter 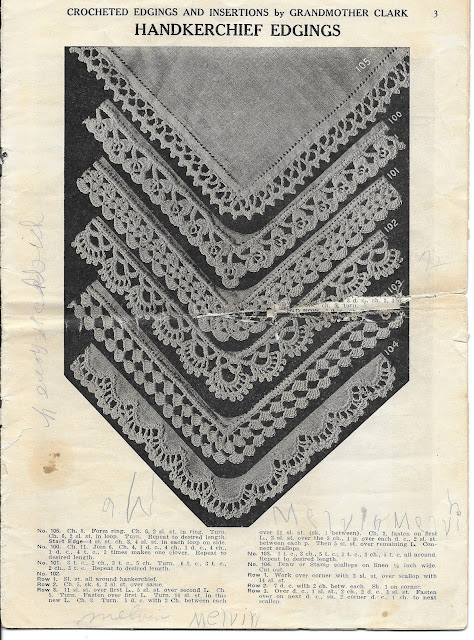 When my Aunt Clara passed away in 1996 I was given a collection of "stuff" that she had saved from her Mom, Katherine "Katie" Schleich.  I received crochet patterns, fabric, quilt patterns and embroidery "stuff".

<<  I love that my Dad and his older brother used this pattern book to practice writing their names!

Dad may have been about six years old (guessing that because of the number 6 included in the practice), making his brother Leroy about 10 years old... practicing his cursive penmanship.

In that collection of "stuff" were 15 quilt blocks that had embroidered signatures from various people (and varying sizes)...  Some of the names were familiar... some were family and some I had never heard of.

In 2009, because of health reasons (a whacked out thyroid that was aggravated with stress from my job) I resigned my position as a part-time administrative assistant (filling a full-time job) and began my quilting adventure in full force.

Things were tight financially so I began my quest to use fabrics that I had on hand left over from clothing for myself or our girls... thus my love for scrappy quilts!  And thus the development of my love for finishing others abandoned projects... and those signature blocks was my first project that was started by someone else.

Those signature blocks didn't really mean much to me because there was not one that had my Grandma's name on it.  I remedied that by making one of the blocks, using some of the original 1930s fabric from her and tracing her signature from her citizenship paper from 1943.  I knew that my Dad would be able to put faces with the names and so it became a gift for him. Oh how I wish he were here to tell me about them!

The Kansas City Star pattern was published August 12, 1938.  It happens to be that was about that same time that my Grandparents moved from the Arkansas Valley to the Trinidad area.  It may have been the beginning of a memory quilt for them.


A Quast family member contacted me and offered this bit of info...

Linnie Quast, my grandma, was born in 1901 and came to Colorado via train with her best friend when she was 18 to become a Harvey Girl.  She married my grandpa, George, in 1922.  They homesteaded on County Road 25, just east of Swink where farming was the income.  They lived there for over fifty years.  My grandma was a crafter.  She did canning, embroidery, and crocheting.  She made many things and entered them in the fair every year.  I still have a lot of her handiwork.  After my grandpa died we moved her to Denver to be closer to us.  She passed away in 1997, just shy of her 96th birthday.  She was very active in her church, United Methodist Church in Rocky Ford.

Carly Quast, born Kathyn Carlys Quast, was born in 1924.  She was an only child.  She also did embroidery work.  She attended Swink Schools graduating valdictorian of her senior class in 1942 or 43 I believe.  I'm not sure of the year but do have the information stored in a box.  Anyway she married my dad in 1947 and moved to Denver.  She had severe Rheumatoid Arthritis so was unable to do any handiwork shortly after she married.  Since her signature block was done in her maiden name, it would have been before she married.

Minnie Quast was my grandpa's sister and lived on County Road 25 as well, just down the road from my grandpa.  She was born in 1888 and died in 1971.  I never knew her well.  About all I can tell you is that she had Parkinson's and grew beautiful flowers.  She never married.

She goes on to say "How these ladies are all connected is something I don't know.  Maybe through the church."

Some other memories shared with me included:

Miss Evelyn Schleich married Charlie Holderman. They lived at 306 Trail Rd. (Hwy 194). I live on part of the property once owned by them at 310 Trail Road. I know they had 2 children for sure, Charlie Jr & Patricia Holderman. Charlie Jr built the home I currently live in. Charlie was also known as "Pops" Holderman and had a roofing business in La Junta for many years. I know he also owned and operated a hamburger stand on 4th street between Colorado & Raton (in LaJunta, CO).

Betty Masters married my Dad's (Albert Will) brother Eddie Will.  I think they lived in Rocky Ford. At some time they moved to Calif. They had a son, Kenneth and a daughter, Donna.  All are deceased now I think except for Donna.

Rowena Masters is Betty's sister and are the daughters of Mrs. Hester Masters and Mr. Quincy Masters.

"Susan Yergert was my Grandmother and Miss Martha Yergert my Aunt, her son is Galen living in Arizona. Susan Yergert had two sons Paul and Herman (my father)and three daughters Martha,Elsie and Betty."

Mrs. Yergert is a little vague, but it could have been Catherine Yergert, the mother of Katie's sister-in-law, Christina.  Among all "the stuff" there was one envelope that had Christina's name written on it containing pre-cut pieces for a signature block... perhaps it was never passed on.

All the individuals listed above lived in the Lower Arkansas Valley, including Rocky Ford, Swink and La Junta...  As I state before, the signature block pattern was published in 1938 - about the time that Phillip and Katie made the move from La Junta to the Trinidad area - Hoehne & Model.

Dad used to tell of how Mr. O'Brian would show up at the farm and he and his brothers would gather around waiting excitedly for him to tell them to go look in the glove compartment of his truck... they would find it filled with candy.  I'm sure Mr. O'Brian was involved in some manner in making arrangements for the men held at Camp Trinidad to work at the farm.

John MacDougall and Christine MacDougall lived in Trinidad and John, according to the 1940 census was a general electrician for CF&I.  I am a bit puzzled about the connection with these two...  I'm sure if I keep digging I will eventually find something...

Speaking of finding...  I have found a treasure trove of information over on Family Search... a FREE family research site.  It is a rabbit trail really... one could easily be captivated for HOURS with the information available at your fingertips! Draft records, census records... even a few pictures.

Funny thing about this picture... After Grandma passed away and it came time for Grandpa to purchase a gravestone he spelled her name phonetically... With his German accent and all... "Katarina"... Now all of the legal documents such as the boat records, their marriage certificate, her US Citizenship certificate and death certificate have her name as Katherine.  Oh the things that happen when grieving...

None the less, these individuals made up their circle of friends...

Who would you collect signature blocks from?

Melva Loves Scraps - Home of the Pieces From The Past Sew Along
that features vintage Kansas City Star quilt blocks!
Posted by Melva at 11:00 PM