Indian Star Salsa - Pieces From The Past

August draws forth memories of canning and freezing produce... from the young age of 5 (50 years ago!  What???)... I recall my Aunt Clara teaching my Mom how to can peaches.

Mom was pretty much a novice in the world of canning since her Mom wasn't much of a domestic goddess, but Mom was willing (maybe urged) to learn.

I recall dragging a chair over to the counter to help with the preparation of the jars and the fruit - nibbling on the discarded peels of the peaches as they carefully cut the peaches in half and then dropped them into the canning kettle of simple syrup and then transferring them to the clean canning jars.

I recall also that the remaining syrup and peelings were combined and cooked together and then strained to make peach jelly.  I watched my Dad strain and then squeeze every last bit of liquid from the "left-overs". 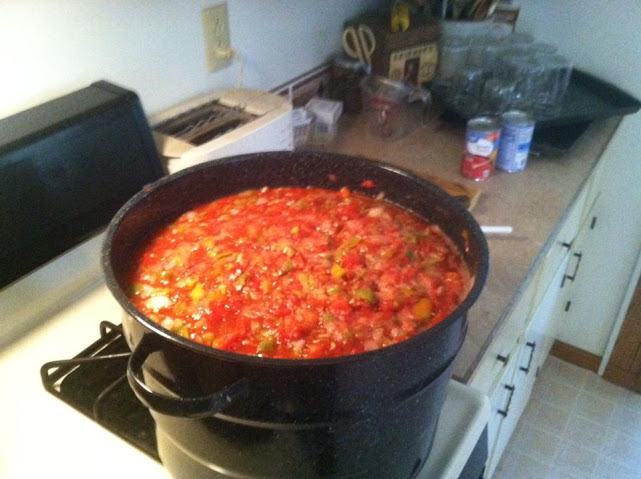 Fast forward 16 years and you would find Dave and I canning homemade salsa on our first wedding anniversary.  It was before having our own garden so we purchased all the ingredients for the salsa from a local farm stand.

This is a photo from more recent years... 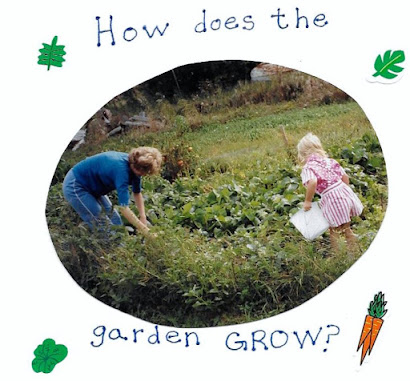 It was after we moved to the Gromer Family farmhouse in 1987 that we planted a garden.  It was amazing!  It was good black dirt and water was never an issue.  The deer and rabbits though... Ugh!  We put up a small fence to keep out the rabbits and then caught the deer "red-handed" as he waltzed across the yard towards our garden and his glorious buffet.

Dave snuck out and around the back of the house and laid in wait along the side of the garden in the tall weeds/vines/grass that grew along the chicken wire fence.  As the deer approached the garden he waited patiently... and then jumped up at the perfect moment of surprise yelling and waving his arms.

The deer didn't quite know what to do!  It was like the cartoon characters jumping into the air, turning and running with their legs mid-air.  It literally scared the poop out of the deer!  LOL!  It was the last we saw of our frequent visitor and we started getting an abundance of green beans.  Funny thing... the deer never ate any of our chili peppers that we grew... Hmmmm.

That garden kept us fed for 6+ months and the pantry shelves were filled with a variety of colors.  We had tomato sauce, salsa, and spaghetti sauce.  We would buy fruit when in season and make jams and jellies of various types.  We also had russet potatoes, zucchini squash, onions, peppers, green beans and probably more... but my mind is coming up with them.  It's been a few days since then. 🤷

Since living in Colorado we have never had a garden.  The soil is full of clay, water is often restricted because of drought and the growing season is just too short... as is my patience.  I don't have the desire to do starts in the house and nurture them until it is time to transfer outside.  There is often a late freeze in May and and early one in September.  My Dad kept busy with his garden and he was always happy to share his excess.  Now I support one of the local farms. 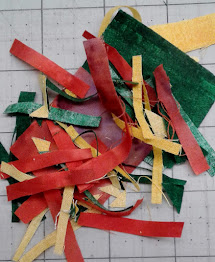 The other day as I squared up HSTs for a miniature Indian Star block - block #11 of the Pieces From The Past Sew Along I thought that the trimmings looked like some salsa with mango or peach.  What do you think???

I've never added mango or salsa to our recipe, but the purchased salsas that I have had with them were tasty.

Here is our personal recipe that has been tweaked and perfected over the years...  Dave prefers that the salsa not be too watery so we add a large can of tomato paste just before placing in the jars... oh and we allow it to boil for much longer than 10 minutes.  Probably more like 30 to 45 minutes to allow the tomatoes and peppers start to break down.  And our weights are always generous... meaning 2 lbs of peppers is like 2+lbs., etc. 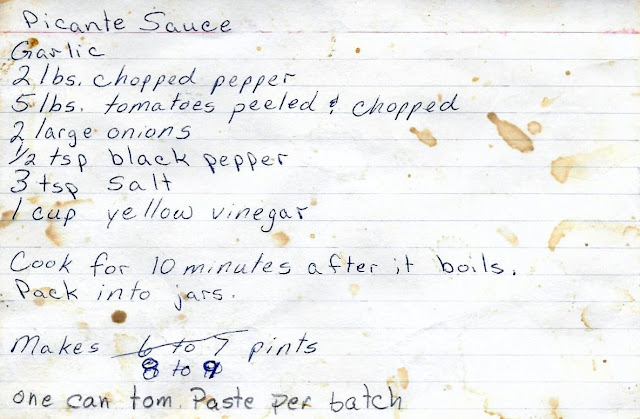 While we lived in Illinois I was often found to be making the salsa by myself and I utilized the food processor for all of the veggies.  I mean I had two small children and time was a precious commodity.  It seemed as though I was in the kitchen from July to September or October making salsa, blanching and freezing green beans, making jams, jellies and apple sauce and tomato sauce.  Time was of the essence!
After my Dad had bypass surgery in 1990 and retired shortly after that, my parents traveled to visit us for a week in August.  We took them to the family cottage in Illinois and let them experience  life on a lake.  Dad was not a fan of water... Mom enjoyed the time.  Neither were a fan of the humidity.  The second morning there they commented that the sheets on the bed were still damp from the previous night's steamy temps.  I think that they were amazed that THEY were not moldy from such conditions.  LOL!
Before returning to IL we stopped at an orchard and purchased a bushel of fresh peaches.  Upon our return to the farmhouse Dad started gathering up any and all canning jars that had been left behind in the basement.  He washed the jars, prepped the peaches and syrup and proceeded in canning fresh peaches.  I'm pretty sure Mom and I were in and out of the kitchen at various times, but for the most part he handled it.  Again, I had a pre-schooler and a toddler that kept me plenty busy, but I was always more than willing to run to the store for more lids or sugar.  Good memories. 💗  Canning and freezing of fruits and veggies is the closest he ever got to cooking. LOL!

After our move Dave volunteered to help with the salsa, but he wanted it chunky-style.  Ok... so, working together, he dices the tomatoes by hand and I pulse the onions and peppers with a few tomatoes in the food processor.  It has been a good compromise... and some quality time together.  And great results with the chunky salsa!

Just the other day I had picked up some roasted chilies and after dinner they needed to be peeled and de-stemmed.  We were both tired from a long, hot day but TOGETHER we got the job done and then went and collapsed.  Teamwork is best... 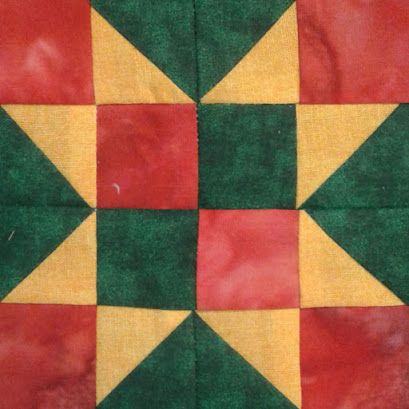 Here is my mini-block.  The finished size is 4-inches.  It's pretty darn cute!
It could make a really cute pin cushion... or???

I'm not sure what I am going to do with this little salsa star, but I am open to ideas for this block as well as some of the others that I have.

Leave a comment... I'd love to hear your suggestions!

PS... one last "chili" story.  We had an over-abundance of chilies from our garden one year.  Rather than let them go to waste, we chopped and dried them on cookie sheets at a low temp in the oven.  When dried, we then pulsed in the food processor to make chili flakes.  Despite scrubbing the cookie sheets well, the next batch of chocolate chip cookies were SpIcEy!  Lol!  Well... maybe the next several batches of cookies. 😉
Stay Piece-ful,
Melva

Melva Loves Scraps - Home of the Pieces From The Past Sew Along
that features vintage Kansas City Star quilt blocks!
Linking with:
Put Your Foot Down at For the Love of Geese
Needle & Thread Thursday at My Quilt Infatuation
Creative Compulsions at Bijou Bead Boutique
Can I Get A Whoop Whoop at Confessions of a Fabric Addict
Off The Wall Friday with Nina Marie
Brag About Your Beauties at From Bolt to Beauty
Peacock Party at Wendy’s Quilts and More
Friday Foto Fun at Powered by Quilting
Finished or Not Friday at Alycia Quilts
Oh Scrap! at Quilting is More Fun Than Housework
Sunday Stash at QuiltPaintCreate
Patchwork & Quilts at The Quilting Patch
UFO Busting at Tish’s Wonderland
BOMs Away at What A Hoot Quilts
What I Made Monday at Pretty Piney
Monday Making at Love Laugh Quilt
Design Wall Monday at Small Quilts and Doll Quilts
Posted by Melva at 4:08 PM