Quilters Through The Generations - Terry Carney 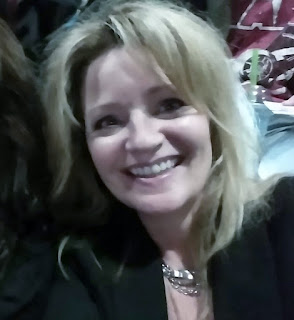 Today Terry Carney joins me.  Terry found her way to me with a little help from Tish Stemple (featured in this series a few weeks ago) and Tish's Adventures in Wonderland and the most recent New Quilt Blogger's Group.  Terry and Gail reside in the same family tree and share a Grandmother, Edith Pearl...


Terry Carney (nee McMullen) has only been quilting since 2016 but has a passion for quilting that will not be put out anytime soon.  You can read her entire bio on her about page at her blog, TLC Quilts...

Have you ever made a quilt?

If so, who got you started quilting?

Me, myself, and I.  I was inspired by my cousin, Gail, who had made several quilts for the family (I received one of her quilts as a wedding present too!)

Who taught you to sew?

My home economics teacher, I suppose. My mother was a prolific sewer - always at the machine - however, she passed away before I got past the stage where I liked pressing the buttons and moving the levers on her sewing machine.

Tell me a story about your first quilt.

Well, my first quilt actually was one I made when I was expecting my first child. It was a printed panel of fabric, sandwiched with polyester batting and a backing of some kind - I’m not even sure if the backing was cotton or not. I knew NOTHING about quilting. I hand stitched the outline of the picture on the panel. I can’t even remember how I finished the edges. I’m absolutely positive I did not actually bind it!

But my first true quilt after that stage was during the summer of 2017 when I found out my daughter was expecting. I pieced the top - I can’t remember the pattern, but it was mostly 5” squares with a couple rectangles thrown in - and used yarn to tie it. I cut every one of the pieces for the top individually. I did use a rotary cutter, but didn’t know about cuts and sub-cutting.

What did you do with your first quilt or do you still have it?

I gave it to my grandson, Kolten, and he still has it. He has two others I’ve made for him also - one at the babysitter’s, and one at my home.

Did your mother quilt?

No, but my Paternal Grandmother quilted.  I didn’t learn that until I was an adult, though.  Her name was Edith Pearl. 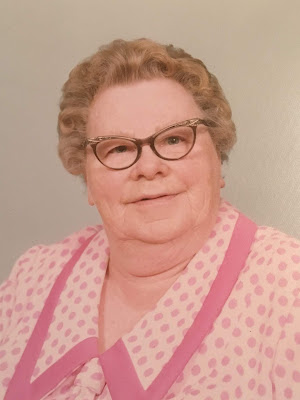 I remember one warm summer day and Grandma and I were on her front lawn. I was about 10. Grandma lost both her legs due to diabetes so she was sitting in her wheelchair and I was sitting on the lawn. In the grass there were small, white, daisy-like flowers. She asked me to pick several - down low, close to the ground. She taught me how to make a daisy chain. It is a simple memory, but I felt transported back to a gentler time in history.


When I was young, I didn't know Grandma made quilts.  My father isn't much of a talker and didn't share his memories unless prompted.  (Even then, he still keeps it to the simplest of details.)  I did have a quilt on my bed as child which had 1/4 Dresdens all over it.  I remember looking at, no - studying it - but not ever understanding what a quilt actually was, nor how it was made - let alone, who made it.  It wasn't until I was an adult that I was opened to the world of quilts...just one more thing I wish I had understood better as a child. 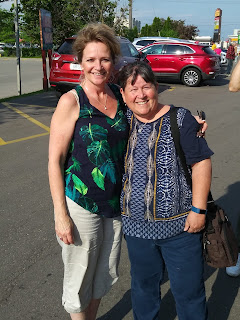 I feel that my cousin Gail was far more fortunate that I was.  She had the advantage of her mother (and possibly her father) making a point of teaching her about her Ontario family.  Ironically, she likely knew more about Grandma than I did, even though she lived across the country from Grandma, and I lived 2 hours away from her.

Gail received her Grandma's fabric "stash" in 2016 and proceeded to make 13 scrappy quilts - one for each of her 11 cousins, her sister and herself - between June 2016 and January 2017.  When she learned that her a cousin's daughter had been diagnosed with cancer she made one more quilt.  You can read the rest about Gail and her quilts on the Quilters Through The Generations tab. 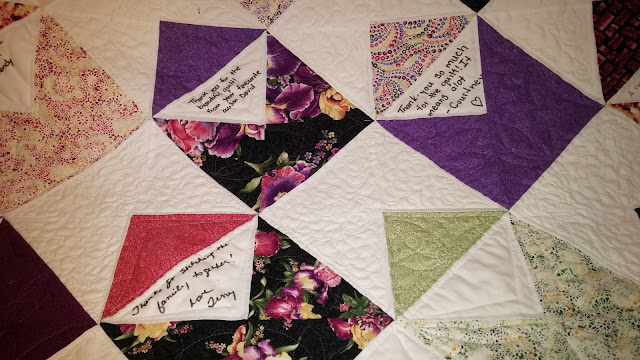 As a thank you to Gail, Terry made a quilt that was signed by each of the quilt recipients... 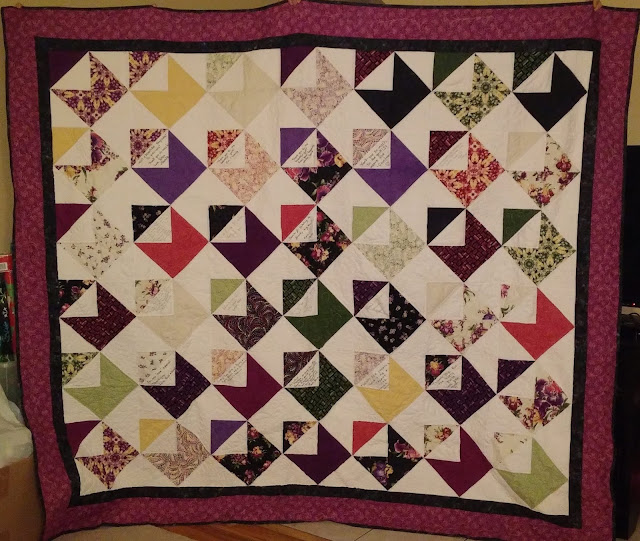 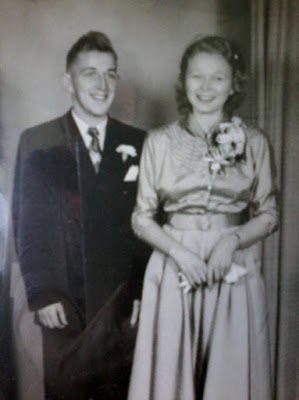 Funny story - Grandma didn't actually want Dad to marry Mommy. It wasn't that Grandma didn't like Mommy, it was because both my Grandma and my Mommy were diabetic. So, when my Dad had a job interview booked in Kitchener (2 hours from where Mommy and Dad lived), they drove to the interview then afterwards, met up with two of their friends and eloped. They were married in a little chapel in downtown Kitchener. My Mom's family knew about it - Mommy made the outfit she is wearing in the picture - but Grandma didn't find out until they returned later that day. I think that's the most rebellious my Dad has ever been!

Have you taught someone to quilt?

Not yet, but I have been approached by a few people - some of my second cousins and several friends.  Here’s hoping someday at least one f them will follow through on my invitation  ;)

I have made 23 since June 2017; Most have been gifted to friends and family; but some I have kept.

Do you have a favorite block?

No I don't. I get jazzed about a block or a pattern, and NEED to make it. Once I’ve made it I try not to repeat it - so that I can try another block.

Do you have a favorite quilt?

Year One - It is a quilt that I made using scraps from my first year of quilting, and I took a lot of liberties with the FMQ as well. It is a sample of some of my best quilting. 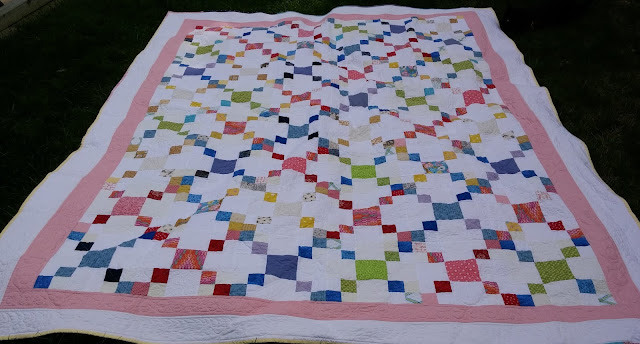 Do you participate in any quilt groups?

There is one guild in my town but they don’t have room for new members. I have been considering starting my own, but haven’t figured out some of the logistics.

Have you entered any quilt competitions?

No. That’s like playing cards for money. It would take the fun out of it.

Have you sold any quilts? For how much?

I was asked to make a quilt for a friend’s granddaughter, and now I’ve been asked to make a quilt for another baby in the same family.  I’m not a big fan of selling my quilts - I could never live with myself if I charged what they are worth.  However...this latest baby quilt (it will actually be single/twin sized) is an example of my brilliance!!  IMHO  LOL...  I am renovating my kitchen and I bartered with my friend’s brother (who asked me to make a quilt for his new grandson).  He will be doing my tiling, and I will make the quilt he wants.  That works for me!!

Where do you get your inspiration from?

Have you ever see the movie “August Rush”? The short answer is: Everywhere.

What is your favorite part of quilting?

When I’m in the middle of FMQ, I’m anxious to get to the piecing. When I’m piecing, I’m dying to get to the FMQ part! When I’m doing the binding, I’m excited to hand stitch on the label. I love every step! The challenges, the finish, the start, the planning, the sharing, the fabric, the thread, the sound of my sewing machine. It’s a little taste of heaven.

Have you ever "bartered" with your quilts?

I have, in a sense.  My brother-in-law designed my QTTG logo and in turn I am making a custom table covering and seat cushions for him and his family... I think it is a brilliant idea, Terry.

What about you?  Leave a comment and let Terry and I know what sort of items or services you have traded...

Email ThisBlogThis!Share to TwitterShare to FacebookShare to Pinterest
Labels: Quilters Through The Generations