It's A Wild Life - Aspen Tree 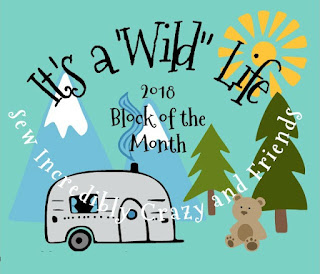 This month's block is another fun mixed technique block that includes piecing and applique.  You can find the pattern from Pat over at Life in the Scrapatch.  The block below is by Carla at Creatin' in the Sticks. 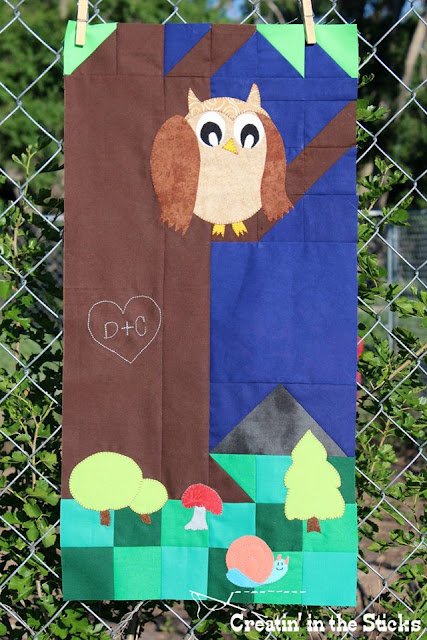 I still don't love applique, but am coming to accept the technique... enough to include some a special feature in my block, that you will see in just a bit.

Join me as I journey back in time, once again, to a time when our family was on a mountain outing on Cordova Pass... it is an unpaved road that has a unique landmark that was created in the early 1930's by the Civilian Conservation Corps. (Photo by Lars Leber)


It was 1982 when my dad decided that he needed to leave his mark behind... 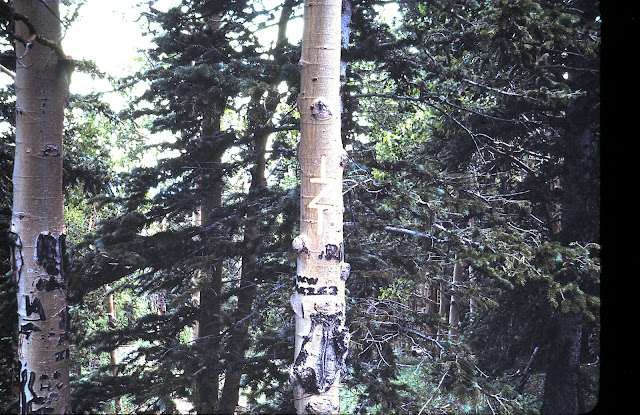 My dad was quite proud of his brand.  And all of our camping gear, hunting gear, etc. was marked  with his brand.  And because we camped with my grandparents and my Aunt & Uncle quite often and the cookware, silverware and cups and coolers were all the same... and my parents were sticklers for accounting for "their" stuff - the identifying mark made it easy to distinguish their items from the others.

You can see from the picture above that many others had left their marks on the tree as well... It isn't a practice that I recommend personally.  I am more of the mind-set of leave no trace/evidence... However, placing my dad's brand on my quilt block did seem the right thing to do... After all, Father's Day is just around the corner, and he influenced my love for camping and mountain outings...

It was years later that our little family of four made our own journey over Cordova Pass and actually found the tree that Dad had marked... still alive and well.  I felt better knowing that the tree didn't suffer too badly from the damage!


You probably noticed that I used one of the little birds from a previous block rather than the owl... I figured since I was using a lighter sky background that didn't reflect "night-time" I needed something that indicated it was day-time... thus my little bird.

Early morning while camping is my favorite time... I am a morning person anyway, but snuggled down in the sleeping bag or bedding and listening to the sounds of the birds and woodland creatures as the world begins to wake up is a treasure to me... a little piece of heaven... quiet and serene... Well, except for that time last fall when some coyotes or some other predator startled a donkey in a nearby pasture.  Oh!  My!  Goodness!  What a racket it made!   It was hee-ing and it was haw-ing something terrible!  And all Dave and I could do was giggle!

What is your favorite time of day?  Are you a morning person? Or a night person?  Or??? more like the middle-of-the-day- kind of person???

Leave a comment to let me know what your favorite time of day is and why... I love to hear from my readers!

Melva Loves Scraps - home of the Quilters Through The Generations series