Quilters Through The Generations - Frances Preszler 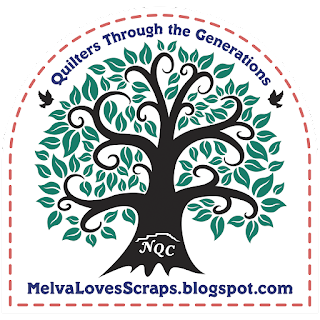 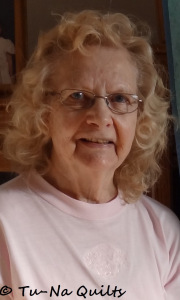 Today I introduce you to Frances (Huber) Preszler.  Frances is Karen Thurn's mom and I had the pleasure of meeting her at the Tucson Quilt Show earlier this year.  She was a delight to visit with and is a humble, talented quilter.


How did you get started with quilting?

I guess that I pretty well taught myself to quilt.  Maybe just for something to do in those days, no TV, no computer and maybe no telephone.  I still have my treadle sewing machine, though it is not in working condition.

Can you tell me about your first quilt?

I am thinking that my first quilt was the one I put together for Karen when she went off to college.  I don't believe that I have the first quilt that I made. 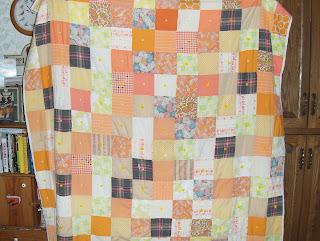 BUT, Karen does!  She explains…

“The top was made of large daisy type flowers that were appliqued on a white cotton/poly blend.

The back (shown here) had squares of used clothing or leftover scraps from my sisters, mom, and myself. I used that quilt for many years but eventually the top tore and I ripped it off-gasp- but there was another plain white top under that top (shown below) and the back is still intact so I still use it.” 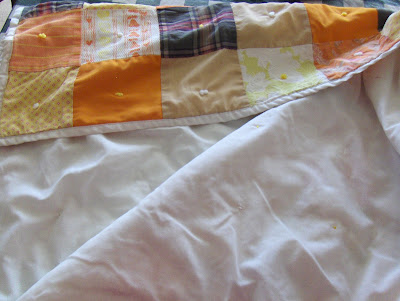 Have you ever taught someone to sew or to quilt?

I was a 4-H leader for at least 17 years, so I guess I did a lot of teaching sewing to the members. I also taught my girls to sew. I got Karen started making her first quilt when she was a teenager.

When my second daughter, Sheila, went off to college, I gave her a box of squares of fabric I had cut out (using a cardboard template) so she could sew them together and make a quilt in her spare time. I don’t think she touched it, as they came back home.

Notice that Frances used templates cut from cardboard or cereal boxes... She does have a mat, rotary cutter and a ruler that she uses now.

Sheila claims she’s not a quilter but we were able to get her to take some of those blocks of grandma’s off the backing last summer so they could be resewn onto more durable fabric. 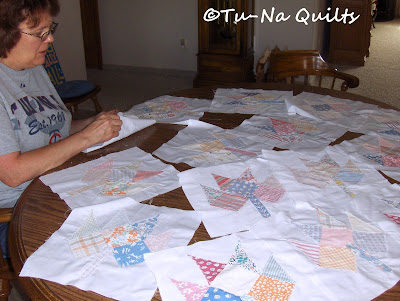 Did your mother quilt?

My mother, Julianna Huber, did do some quilting.  Her blocks were the ones we had taken apart.  I think it was, "The Flower Garden" or something like that.

The photo shows Sheila carefully removing stitches of the leaves made with original 1930's fabric by Julianna Huber so that they could be appliqued onto a different backing fabric...

I don't know anything about either one of my Grandmothers.

My mother-in-law Katherina (Landenberger) Preszler was a quilter. I lived on the same farm with my in-laws, until they retired. Karen and Mark have a quilt that was made as a wedding gift in their Arizona residence.

I’ve made eight jean quilts, three heart quilts (photos are currently not available), one called Candy Store that was from an unknown quilting magazine for my grand-daughter Emily,  and a pink one for Abby, another grand-daughter. I made one for my first grandson, Jonathon. 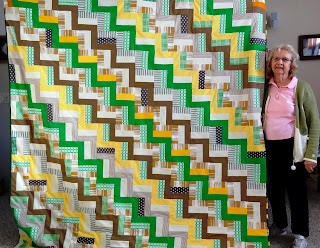 Karen has been helping me with five or six made from double knits, that includes Sheila’s and Terry’s (See the story over on Karen’s interview). 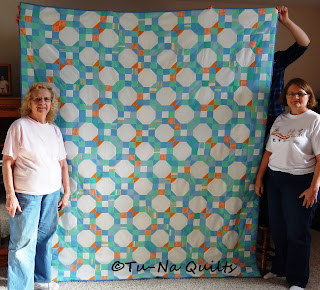 Above is the Fence Rail quilt made for Terry...


I have also made several wall quilts including this flag. 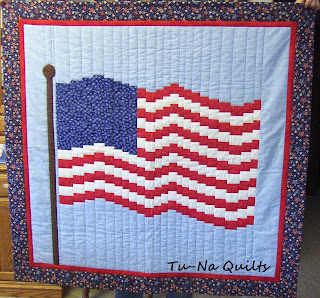 And probably many more that I can’t remember.

Frances is quite the seamstress… Karen let me know that she made baptismal gowns for the girls and baptismal tuxedo suits for many of her grandchildren using either no pattern or making her own. She also sewed many clothes for herself and us girls, as well as pillowcases for grand kids and sons-in-law, and aprons, table runners and table toppers for many friends and relatives.

Do you have a favorite block? 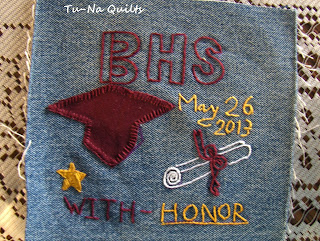 I do like the heart quilts,
but my favorite is the jean squares. 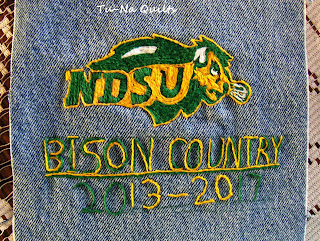 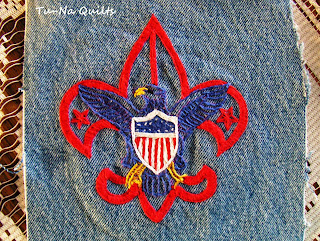 I hand embroider things that were important to the recipient of the quilt on many of the squares like a picture of their first car or their house or the boy scout emblem. Some people don’t believe that I hand sew them and think that I used a machine.

I also like the little Dutch girl.   Also known as the Sun Bonnet Sue block and want to make a quilt using that pattern. 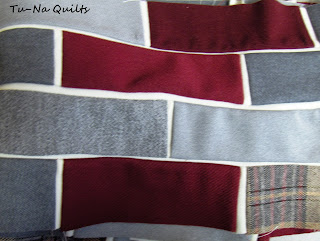 I am currently working on the double knit brick pattern quilt and also a jean square quilt.


I am told that she also hand embroiders dish towels. Her work is beautiful.

Have you ever entered a competition or sold a quilt?

No, I have never entered a competition and have no ribbons.   I have not sold any quilts either, because no money could buy them, they are priceless.

I don't participate much in any groups… no time for that, besides I like to work alone and do it, "my way". I had a friend who was an avid quilter who sewed with me during the winters and gave me help and suggestions when I needed it.

I have attended a few of the Arizona quilting group meetings in the village where we “winter” and have accompanied the group to the Quilt Festival show in Tucson for many years.

Where does your inspiration come from?

I don't know, just like the idea of making something nice out of old jeans that would otherwise be thrown in the trash. I do purchase fabric for any wedding quilts that I make. 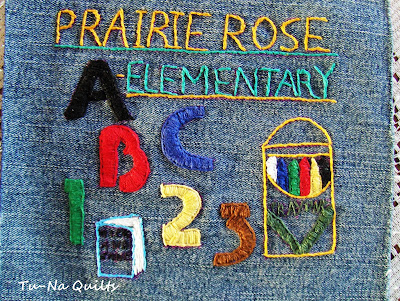 I, personally, can appreciate the fact that Frances is an "up-cycler"... the jean quilts were made from recycled jeans and of course there is the double knit project made from leftover fabric and used clothing from the family.

What is your favorite part of quilting?

When the quilt is all finished, that is such a good feeling of accomplishment and makes me feel of a job well done. 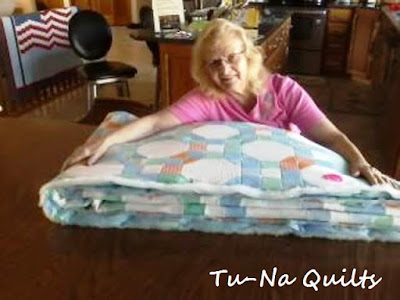 Just look at that look of satisfaction on Frances' face... I can relate to the feeling of satisfaction when a quilt is done... and when the fabric has so many memories and stories tied to, and sometimes ON, the fabric in the quilts, it is even more satisfying.

Many thanks to Frances for taking the time share her story as a Quilter Through The Generations.


PS - Join me all this week as part of Quiltmaker's 100 Blocks, Volume 16, Road Rally!  I will be sharing about my Pumpkin Log block on Thursday...
Posted by Melva at 2:58 PM