Last week when I made my list of quilty tasks I thought it was a far-reaching goal to get both the baby quilt AND my customer's Star Memory quilt completed...
I am thrilled to announce that I was successful!  Ta-Dah! 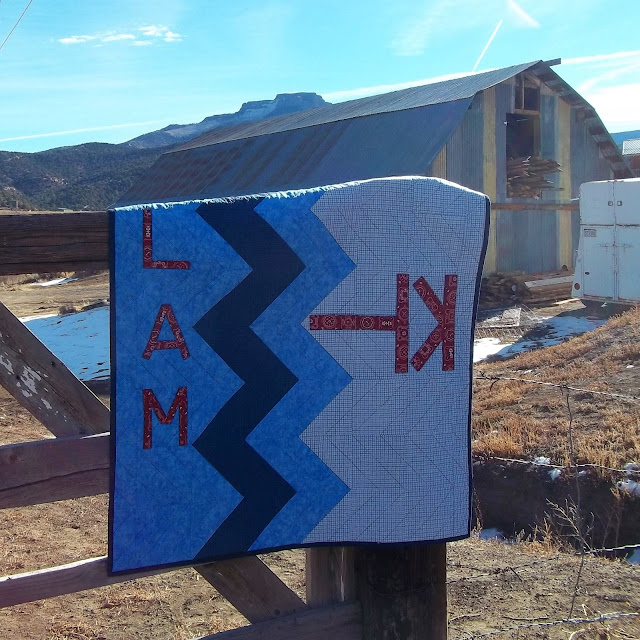 ✔ Get quilting done and machine sew the binding
✔ photo shoot 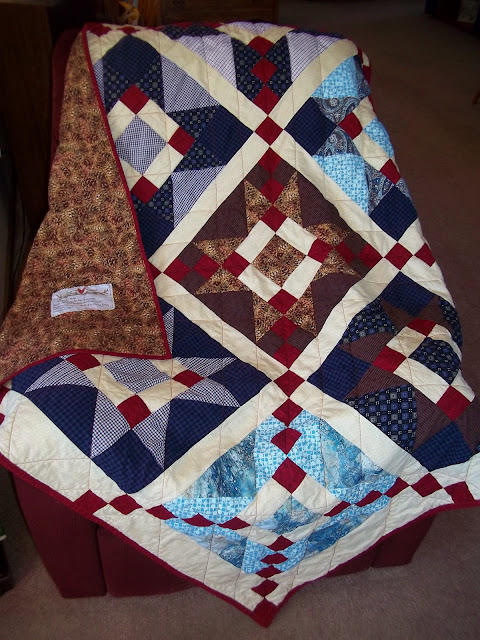 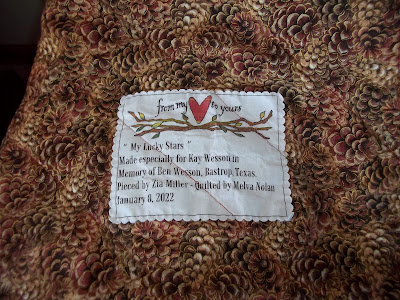 ✔ Thank Goodness It's Finished Friday linky party... The parade of finishes was spectacular!
✔ Finalize further details of my next sew along.  In case you missed those details...
The inspiration for my next sew along comes from my maternal grandma, Tressie Teegarden, and our afternoon visits after she was settled into her new home in Colorado following the death of her lifetime companion and husband in 2002.

I'll be calling it Pieces in the (Tea) Garden BOtM. 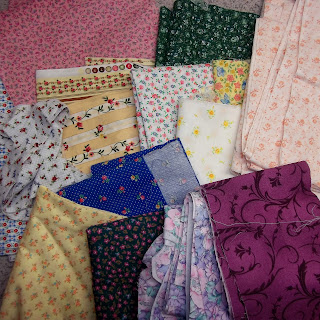 Both Grandma and Grandpa T were tea drinkers - they had lots of tea cups... And gardens are planted in rows, so a row quilt just makes sense.  The pretty little flowers that are so often seen on vintage tea sets will be reflected in my scrappy fabric selections.
The following story is the foundation for the blocks that we will create.  This story came from a needle craft publication in 1985.  It was the year that Dave and I were married, my parents celebrated their 25th anniversary and my grandparents celebrated their 50th anniversary and all three of us had needlepoint wall hangings that matched.
In olden days, it was traditional for young girls to make a “Baker’s Dozen” (13) quilts by their wedding day.  The patterns, often handed down from generation to generation, were usually planned when the girl was very young; and, as soon as she could hold a needle, she would start sewing her first quilt.  The last (or 13th) quilt was the fanciest of all.  After a girl became engaged, she would invite her friends to a party to quilt the top of this “Bride’s Quilt”… and in this way she would announce her engagement.
The twelve patterns in this “Bride’s Quilt have been chosen to tell the following story…
“Bride’s Quilt”
Once upon a time, there was a little girl, who wore a bow in her hair.  When she grew up, she began a friendship with a young bachelor.  As the hours and days passed, they began to look at each other with stars in their eyes, and as their love grew, they thought about taking steps to the altar.  So, the young girl got out her spools of thread and made clothes to get ready for their wedding ring day.
After they are married, some of their times together will be bright as noon and others will be dark as night.  But they will try to share their happiness, their miseries and their chores – she grabbing a wrench to help with household repairs and he grabbing a towel to help with the dishes.  Sometimes they will have broken dishes but they will try to remember that “things” can be replaced, whereas harsh words, possibly spoken about the broken dishes, could chip away love.  They will try to follow the Golden Rule as they are learning to communicate openly with each other.
They will also try to keep in mind the symbolism of Jacob’s ladder – “steps of communication” between themselves on earth and God in heaven.
I have a few more details to hammer out but for now, here's what I have...
Pattern releases will happen every four weeks and the dates are as follows:
February 3 - Row 1
March 3 - Row 2
March 31 - Row 3
April 28 - Row 4
May 26 - Row 5
June 23 - Row 6
July 21 - Row 7
August 18 - Row 8
September 15 - Row 9
October 13 - Row 10
November 10 - Row 11
December 8 - Row 12
Block sizes will vary, being either 3", 4" or 6" blocks.  Given the size of the pieces, this will be an excellent opportunity to work on the ever important "scant 1/4 inch" seams."
As I look at plans for this week ~
❧  I see myself doing some small piecing 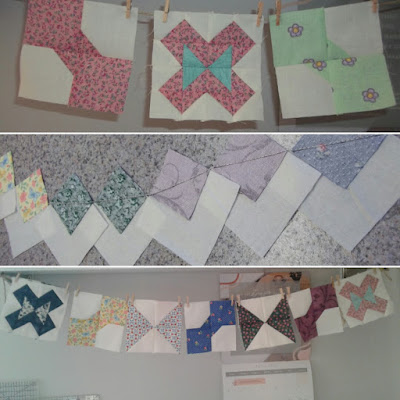 ❧  And a fair amount of time on the computer with pattern writing, story writing and sew along logo creation.
As you look at the center block of the upper section of the picture... This block has 32 pieces in it.  😮  It is 4-1/2 inches, unfinished.  Twelve blocks would be required to complete a row...
Is that too challenging?  Would that scare you off from the sew along?  Would you prefer an easier block such as the bowtie block?  Also, 4-1/2 inches, but only 6 pieces.
Leave a comment... I'd like to hear your thoughts.
Keep Piecing,
Melva
Linking with:
Oh Scrap! at Quilting is More Fun Than Housework
Sunday Stash at QuiltPaintCreate
Patchwork & Quilts at The Quilting Patch
Monday Making at Love Laugh Quilt
Design Wall Monday at Small Quilts and Doll Quilts
Tuesday To-do at Texas Quilt Gal
Mid-week Makers at Quilt Fabrication
Wednesday Wait Loss at The Inquiring Quilter
Posted by Melva at 10:39 AM

Email ThisBlogThis!Share to TwitterShare to FacebookShare to Pinterest
Labels: pieces in the garden, To-Do Tuesday