As I continue my research for the Pieces From the Past Sew Along, I have been reading a book authored by Kurt Landsberger, who was a translator for Camp Trinidad from June 1943 until its close in January 1946.

A portion of his book, Prisoners Of War at Camp Trinidad, Colorado 1943-1946, includes translated journal entries by one of the POWs.  There were many things that captured my attention (and I will be sharing tidbits with future posts) but this particular entry Karlhorst Heil  was especially reflective in June of 1943...

"We hope for an honorable end of the war or don't even dare think about it.  Would it change to something good or an annihilating defeat, a second Versailles with its consequences and after-effects or worse?  Was there not a gamble with the fears of human beings on the once side and hunger for power to be satisfied on the other side, some with a clear thought of reason but others with thoughts close to madness.  But deep inside we hoped that everything would be for the best, that a noble desire for improvements for mankind would succeed in the face of paranoia...

Our thoughts are again with our country, which has to suffer so much, struggling for victory or an honest defeat.  Will we ever see our loved ones again, our friends and which of our friends will be able to return home?  Reject the thoughts of death.  We have to live, hoping to return."


While many of the authors of the letters that Phillip and Katie received longed for a return to the United States, Heil longed to return to his home country, Germany.

As I read his journal entry I wondered "what would the block "Our Country" would look like in the colorway of the German flag?" - Black, Red and Gold.  I HAD to give it a try! 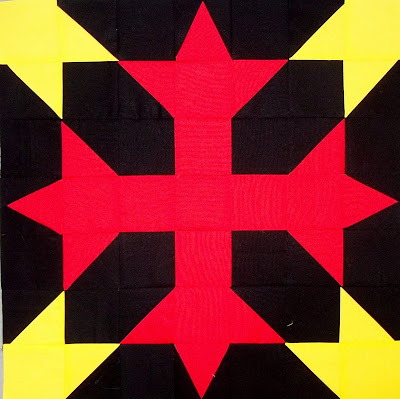 I don't tend to work with black much, but, WOW does it make the colors pop!

If you haven't completed your block, feel free to consider a completely different colorway for it.  Perhaps it is your home country, like one reader from Canada chose to use Red/White for hers.  Or maybe choose colors to represent your family heritage...  Or just your favorite colors!

What ARE your favorite colors to quilt with?

I naturally gravitate toward blues...

Leave a comment - I'd love to hear from you!

Keep calm and quilt on,

Oh Scrap! at Quilting is More Fun Than Housework
UFO Busting at Tish’s Wonderland
Sunday Stash at QuiltPaintCreate
What I Made Monday at Pretty Piney
Monday Making at Love Laugh Quilt
Design Wall Monday at Small Quilts and Doll Quilts
Colour & Inspiration at Clever Chameleon Quilting
Mid-week Makers at Quilt Fabrication
Wednesday Wait Loss at The Inquiring Quilter
Put Your Foot Down at For the Love of Geese
Needle & Thread Thursday at My Quilt Infatuation
Creative Compulsions at Bijou Bead Boutique
Can I Get A Whoop Whoop at Confessions of a Fabric Addict
Off The Wall Friday with Nina Marie
Brag About Your Beauties at From Bolt to Beauty
Peacock Party at Wendy’s Quilts and More
Friday Foto Fun at Powered by Quilting

Finished or Not Friday at Alycia Quilts