A Time For All Seasons - June Blocks 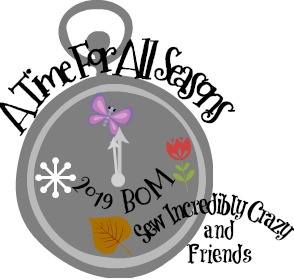 Ok... so this month I am a bit of a rebel... The blocks for month of June all had applique.  The designers of the Sew Incredibly Crazy and Friends BOM drug me over the hump of my dislike for applique last year in their It's A Wild Life BOM... and I so appreciate that! I have even chosen, on my very own, a project that featured appliqued letters to make a fun little baby quilt. 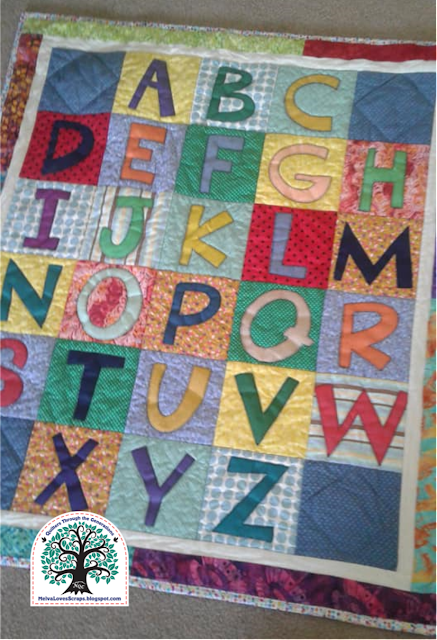 I considered Carol's (from Just Let Me Quilt) sailboat in the sunset... modified.  (I hope that you don't mind Carol!)  With the exception of the sail, it is entirely pieced with the boat and the mast stitched in.  I wanted to honor her hard work in creating this block... and for offering it for FREE (for a limited time). 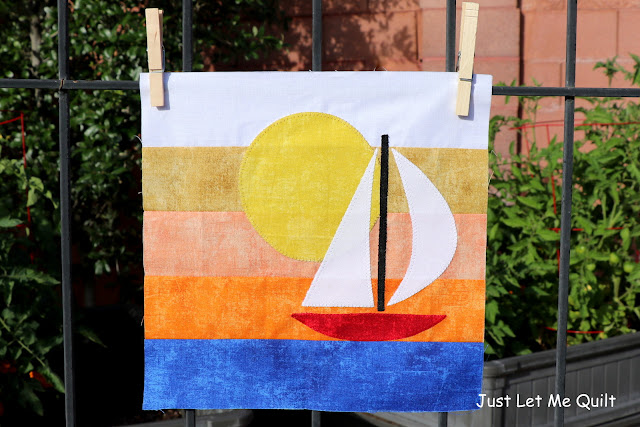 As I worked on this block we were getting ready for another camping trip.

This trip was taking us to the Great Sand Dunes located near Alamosa, CO... just two hours away.  A place that Dave had never been... and the last time I was there was 40+ years ago.  I had twisted my ankle at a summer gymnastics camp the night before the trip and earned myself a trip to the ER for x-rays. It turned out to be a serious sprain, rather than a break... whew!

I spent most of the trip hopping around because we didn't have any crutches available and it was late at night by the time the ER visit was complete, back before the hospital sent you home with everything you needed for the recovery. 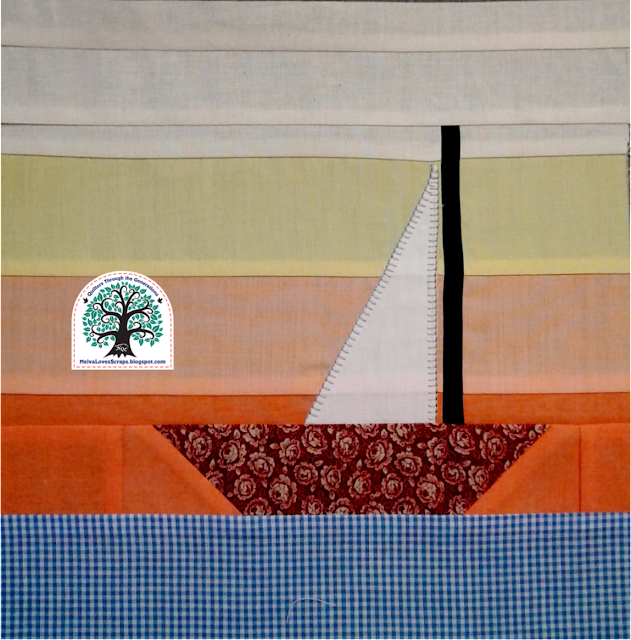 As we made the drive to the Dunes we read up on our destination.  There was info about renting (or bringing) sand sleds or sand boards.  The wind can really blow in that valley and I was hopeful that I would see someone with a sail board.

My hopes were dashed... but we certainly did see lots and lots of people on the dunes with their sleds and boards.  We had no interest in this activity... you end up with sand in places that sand shouldn't be... and that is VERY uncomfortable! 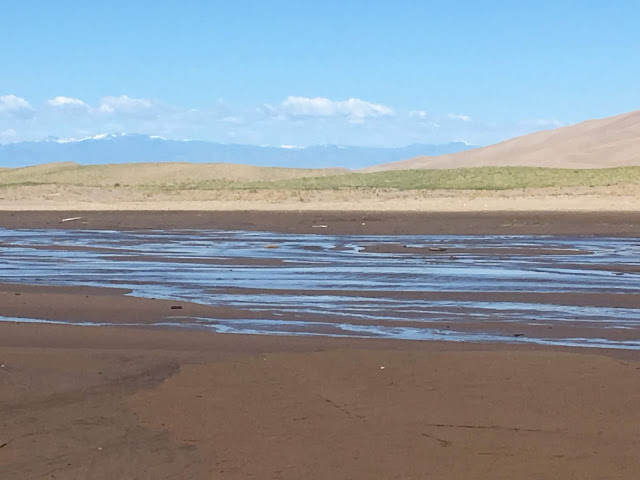 As we walked to the top of the first dune, after crossing Medona Creek at the base of the dunes, people were enthusiastic and excited to be there.  Many could be overheard about "how fun (or great... even epic)" it was going to be to slide down the Dunes. 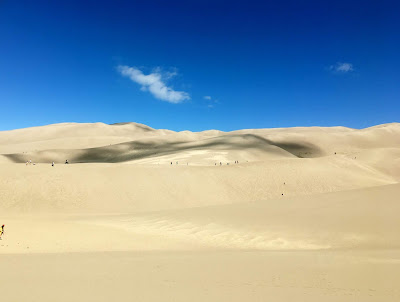 We reached the top, we saw the deep valley on the backside of the dune, rather than the incline continuing up.  It was really quite an illusion.  We opted to walk along the ridge of the long dune and enjoyed watching families as they attempted (yes, attempted!) to slide down the sand pile.

As I watched one family, the first to make it to the bottom of the hill was asked "How was it?" from the top of the Dune.  The response made me laugh. out. loud.  "That was completely un-exciting."  They began the trudge back up the hill, to return the board to the next family member in line as we made our way back down to the creek. 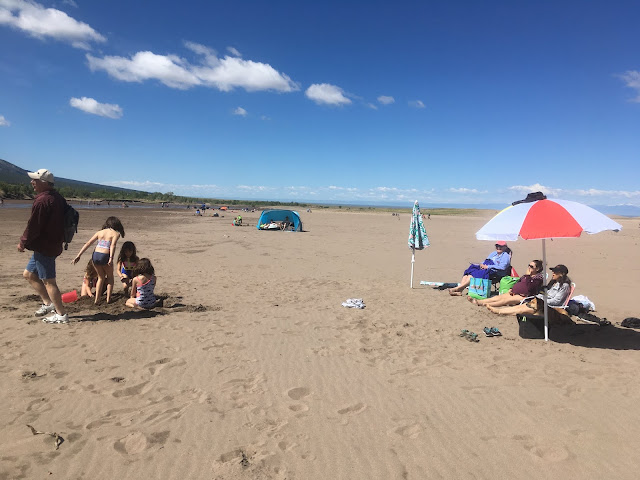 We marveled at the number of families that had parked themselves near the creek for the kids to play and splash in the water and sand as though they were at an ocean beach. 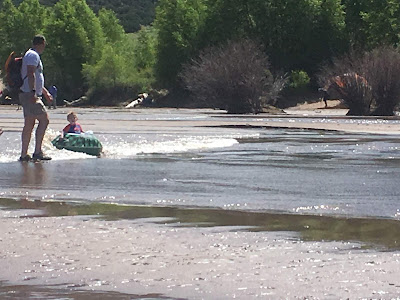 We crossed the creek back to the camper to retrieve our chairs and enjoy a snack - creekside.  That was the best entertainment!  There was a pulse or surge to the water flow... that alone was fascinating to watch.


It wasn't like a normal mountain creek with snow run-off, that runs swift with rapids formed by the rocks and trees in the river bed or creek bed. (I'll share the story of the rushing creek and Zapata Falls with another post)  We were informed by a Ranger that the creek has reached its peak flow on June 9th, but that didn't keep the kids from having fun in tubes and with noodles.  The giggles and laughter made us smile. Watching the parents trying to keep up with the little ones made us tired!  I am sure we would have tried to keep up with the grands had they been there...

After getting settled into our campsite we enjoyed lunch and a hike... followed by a brief nap and another hike.  The picture below is from the top of the Dunes Overlook Trail. 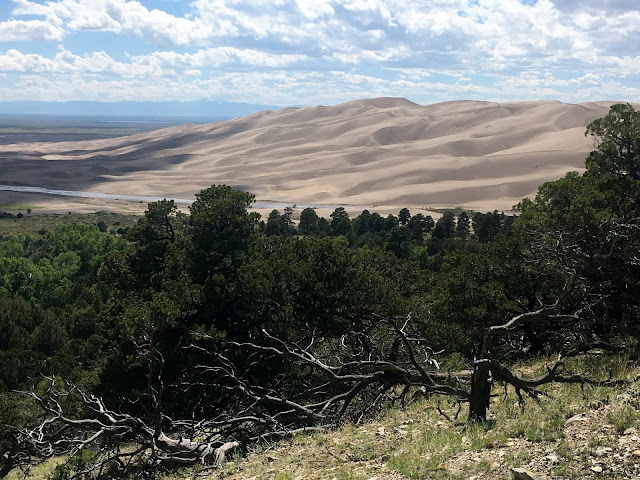 It was fascinating to watch the dunes as the lighting of the day changed.  The shadows from the clouds, as well as the angle of the sun causing shadows to move made the view change constantly.  As the wind moves the grains of sand, the Dunes are an alive and ever changing thing. 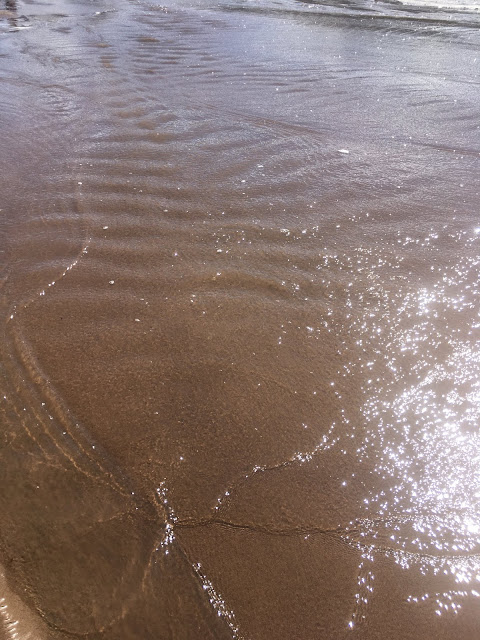 I found inspiration, not just in the ripples in the sand, but also in the way the creek flowed in and around the sand...

I feel that some sort of art-sy, free-motion quilted, improv piece is just around the corner!

We visited with one couple just a little older than us as we sat at the side of the creek... she seemed to think that the Dunes were "dirty"...

We stated, "well, yes, you can see some dirt mixed n with the sand".  She corrected us and insisted that it was "dirty" because it wasn't white like the Dunes near where they lived.  (I'm unsure of where that might be.)  But yes, there are different colored dunes, based on the color of the dirt and sand in the area.  I mean White Sands in New Mexico, is obviously... white!  LOL!

Have you been to the Great Sand Dunes?
Or Dunes located elsewhere?
What color were they???

Leave a comment... I'd love to hear your stories of your visit to one of the many Dunes locations. 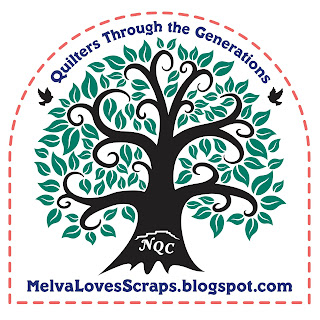 Brag About Your Beauties at From Bolt to Beauty