In the words of Marion...
How our hearts waited for a sight of the Santa Fe of our dreams.  We thought it would be a city, and waited breathlessly for the first sight of towers and tall turrets.  We were in Santa Fe before we knew it.  We crossed a water ditch where half-naked children stood unashamed and un frozen to watch us.  Then we passed through a great wooden gateway that arched high above us.  We moved along narrow alley-like streets past iron-barred windows.  We were among a scattering of low, square-cornered adobe houses.  We saw a church with two cupolas and we saw strings of red peppers drying.
Our caravan wriggled through donkeys, goats and chickens.  We came to the plaza and found there a man, a tall man, leaning on a long rifle.  He had a neck like a turkey, red and wrinkled, but he was the boss of the plaza.  We went where he told us.  Under his guidance, wagon after wagon fell into place.  Dogs barked at us.  Big-eyed children stared at us.  Black-shawled women smiled shyly at us.  We were in Santa Fe.  Because bedlam seemed let loose, mother did not let Will and me out of the wagon until the mules were unhitched and led from the plaza.
As evening progressed young senoritas in crimson skirts, their black, mane-like hair caught up with great combs began drifting languorously by.  Tall vaqueros in sashes and peaked hats strolled among the wagons.  Mother resented the vaqueros.  She tried to shoo them away like chickens, for she did not speak Spanish.
As darkness deepened Santa Fe threw off her lassitude.  Lights glowed in saloons and pool-halls and in the Fonda, a great mud-walled inn.  As soon as our freight was delivered at the customs house, our drivers began eagerly to sign up and draw their wages.  They washed their faces and combed their hair.  Pierre even drew the comb through his choppy mustache.  There was a great hunting for clean shirts and handkerchiefs.  From a dance hall came the tinkle of guitar and mandolin, a "baile" was forming.  The cold air smelled of dust and sweating mules.  We slept in the wagon, or tried to, but the noise and confusion kept us awake; we missed Pierre, missed the comfort of his presence.
The first thing we saw the next morning was the twin cupolas of the church.  They seemed like beckoning fingers, fingers that pointed away from the dust and the squalor to the high blue heaven.
With the vision of Sutter's Fort to lure us we continued on our long trek.  One evening as we drew near to Albuquerque, the train went into camp at a large ranch house by the trail.  Just across the road from us a detachment of soldiers under Colonel E.V. Sumner was camped, their white tents in precise rows.  That evening a boy who was employed at the ranch visited our train.  He stayed around our little tent talking and playing with Will until bedtime.
After he had gone mother discovered that a small workbasket in which she kept her money and jewels was gone.  She carried her grievance to the wagon master who suspected the boy at once.  The lad, upon being accused, admitted to the theft, but said that one of Colonel Sumner's soldiers had taken the basket and its contents away from him.  Colonel Sumner was then appealed to.  He summoned the guilty soldier to his tent and held him there while search was made.  The basket and part of the jewelry was found.  The jewelry had no great value as it was mostly old yellow gold, family heirlooms.
Many years later a gold necklace set with amethysts was found in a shop window in Santa Fe.  It had belonged to my Aunt Mary Rice.  No part of the money was ever discovered.  I was too young to realize what the loss of the money meant to my mother, but I do remember the shadow that settled on her bright face as we journeyed on to Albuquerque.  She was alone in a strange wild land with two little children, and little children were not much of an asset.
During that ride to Albuquerque she was silent making her great decision.  When we reached Albuquerque she left the train that was to have carried her to the gold fields of California.  Will and I went with her house hunting.  I remember the tears that rolled down her white set face when she sold a great yellow brooch and a pair of earrings that were heirlooms.  She rented an old adobe house on the outskirts of Albuquerque and began taking in boarders.
Our boarding house was kept very clean.  Mother always said that cleanliness was next to Godliness.  The dining table she placed in the center of the long living room.  It was a long home-made wooden table covered with a yellow patterned oil cloth.  At each plate she placed a heavy crockery plate, steel knives and forks with bone handles.  The salt and pepper shakers were of tin with little handles.  The cups of crockery were heavy and large.  The food was served in deep dishes.  Our boarders were polite and deferential, if sometimes clumsy and awkward.  They treated little mother with respect and consideration. 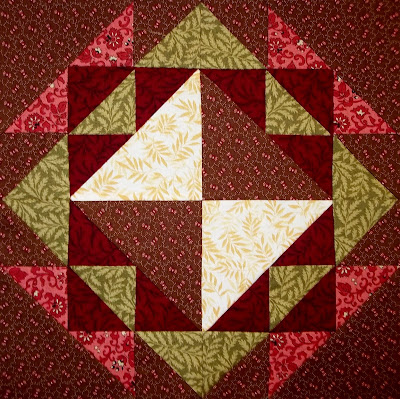 Mother was not long in learning the strange New Mexican cookery.  In addition to the ever-present potatoes, gravy and dried apple pie, she served goat meat and mutton, Indian beans or frijoles.  She learned to make tortillas, and cook dried choke cherries which seemed to be all seed and no berry.  One dish our boarders craved was boiled wheat mixed with red pepper pods and cubes of goat meat.  For breakfast we often had "atole", a mush made from blue Indian corn. 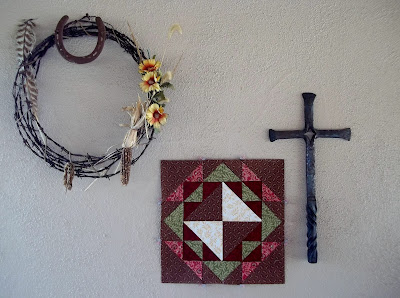 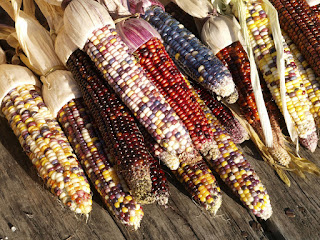 I pulled inspiration for the colors of this block from this picture.  And, just because, here is a bit of information on the multi-colored crop...
Flint corn, or Indian corn, is one of the oldest varieties of corn, a type that Native Americans taught the early colonists how to cultivate. Its kernels, which come in a range of colors including white, blue and red, have “hard as flint” shells, giving this type of corn its name. Flint corn kernels contain a small amount of soft starch surrounded completely by a larger amount of hard starch, which means the kernels shrink uniformly when drying and are dent-free and less prone to spoiling (and therefore ideal for autumnal décor). Despite its tough exterior, this type of corn can be consumed by livestock and humans, and is used in such dishes as hominy and polenta. 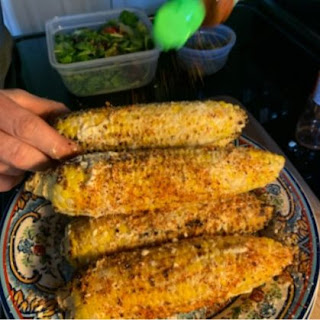 Indian corn is quite different than sweet corn, but with the 4th of July just around the corner, sweet corn is often a favorite side dish to accompany a BBQ.  Several years ago some friends introduced us to "Mexican Street Corn".  It has an unusual combination of toppings on the corn and offers an aMaZiNg taste.
What is your favorite corn dish, or way to prepare/serve corn on the cob?
Here's the recipe. :) 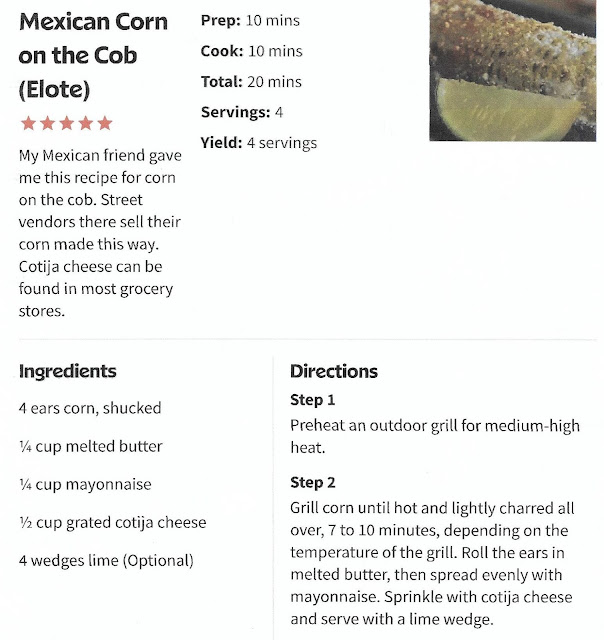 Be sure to leave a comment telling me how you like your corn and then...
Head over to Payhip to get your free Indian Corn pattern.  PLEASE NOTE::  You will want to use  SCANT 1/4" SEAMS ON THIS BLOCK!!
Don't forget to come back and link up a picture of your finished block for a chance to win the free fat quarter.  No need to have a blog, you can link up an instagram or facebook photo.  And if you are not social media savvy, you can email a picture of your block to me at MelvaLovesScraps@NolanQualityCustoms.com and I will happily get it all taken care of.
Don't forget to use the hashtags #PiecesoftheSantaFeTrail #PiecesoftheTrail #PiecesoftheTrailSewAlong and tag me on instagram @MelvaLovesScraps or share to my fb page Melva Loves Scraps
Piece Happy!
Melva
In need of the previous patterns?  They are also available on Payhip... This block and #4, Snow are still free.  Kit in the Korner, Double Nine and Indian Star are now $2 each.  (Each pattern is available at no cost for 6 weeks)
Linking with:
Put Your Foot Down at For the Love of Geese
Can I Get A Whoop Whoop at Confessions of a Fabric Addict
Off The Wall Friday with Nina Marie
Brag About Your Beauties at From Bolt to Beauty
Peacock Party at Wendy’s Quilts and More
Friday Foto Fun at Powered by Quilting
Finished or Not Friday at Alycia Quilts
Scrap Happy Saturday at Super Scrappy
Oh Scrap! at Quilting is More Fun Than Housework
Sunday Stash at QuiltPaintCreate
Patchwork & Quilts at The Quilting Patch
Monday Making at Love Laugh Quilt
Design Wall Monday at Small Quilts and Doll Quilts
BOMs Away at What A Hoot Quilts
Mid-week Makers at Quilt Fabrication
Wednesday Wait Loss at The Inquiring Quilter
Stitch Sew & Show at Life in the Scrap Patch
Posted by Melva at 12:00 AM

Email ThisBlogThis!Share to TwitterShare to FacebookShare to Pinterest
Labels: Pieces of the Trail