In the words of Marian Russell...
We were a bit over two months reaching Fort Union in New Mexico.  It was an eventful two months.  Most of the wagons were laden with supplies for the fort or for Santa Fe.  The freight rate to Santa Fe was $10 per hundred pounds.  Teamsters and drivers were paid $25 per month plus rations. 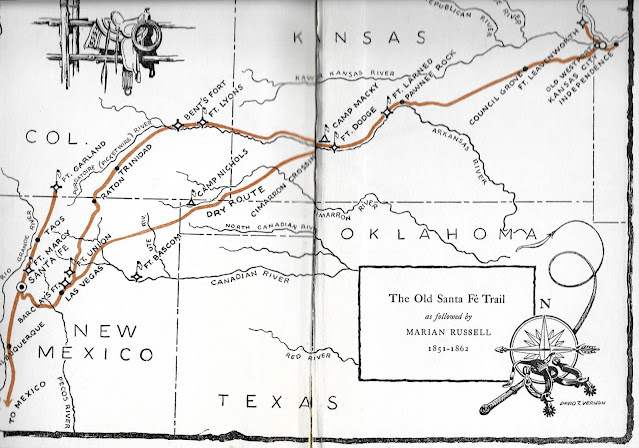 The first trip we made over what is now known as the Cimarron Cut-off.  It left the Arkansas River west of Fort Dodge, Kansas, and bore in a south-westerly direction until it reached the Cimarron River in what is now Oklahoma.  Our long caravan, loaded with heavy, valuable merchandise, traveled slowly.  Sometimes we were alarmed by the Indians, threatened by storms, and always it seemed we suffered for want of water.
The man who drove our wagon was called Pierre.  He was a swarthy Frenchman and a kindly man and one of the government's most trusted drivers.
Our wagon was packed with boxes and bales of merchandise for Fort Union.  Only the high spring seat was left for mother, Will and me.  Back of the freight and on top of the packed merchandise was our bedding and camp equipment.  There was a place in back among the bedding where one might rest as the wagon rolled onward.  I was seven on this trip in 1852 across the prairies, and I could not keep up with Will and Pierre by the wagon.  Often, when I got tired of sitting on the hard spring seat by mother, I would crawl back among the blankets where I would play with my doll or nap in spite of the bumps and shakes of the wagon.
Mother usually sat erect on the spring seat, her face rosy in the depth of her bonnet; she burned easily.  Frequently she knitted as the wagon bumped along, and often as meal and camp time drew near she sat there and peeled the potatoes.
Will usually walked with Pierre, and as the days passed he seemed more hardy.  He tanned in the prairie sun and there seemed boundless energy in his slender body.  It was his chore to build the little cooking fires for mother; but as soon as he was free he would disappear to be with Captain Aubry.
After we had traveled for what seemed like an eternity across the hot, dry land, we awoke one morning to find the air filled with a cool, misty rain.  Although the cool drizzling rain fell all day long it was a happy band that followed the Cimarron Cut-off.  In the late afternoon we found our wagons winding in and out among some dwarfed cedar trees that grew on a flat mesa.  There were a dozen Indian lodges there, and we saw the smoke issuing from the top of the lodges.  We saw their children slither through the wet drizzle, among the stunted trees and the lodges. Someway it seemed we had entered a strange land of enchantment.  This was different from anything we had seen.  Often in looking backward I wonder what the feeling was that possessed me.
That evening when Captain Aubry came to sit at our fireside, he told us we were now in New Mexico Territory.  "This is the land," said Captain Aubry, "where only the brave or the criminal come.  This is called, 'the Land without Law.'  But it is a land that has brought healing to the hearts of many.  Many an invalid I have had in my caravans, but before they reached Santa Fe they were eating buffalo meat raw and sleeping soundly under their blankets.  There is something in the air of New Mexico that makes the blood red, the heart to beat high and the eyes to look upward.  Folks don't come here to die - they come to live and they get what they come for." 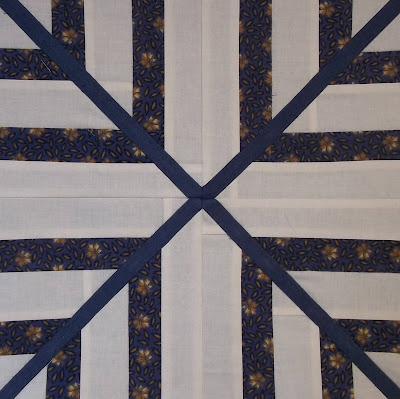 A two week delay at Pawnee Rock made us late getting to Fort Union.  Biting winds gnawed at the open prairies, and frenzied snow had begun to surge up the dry arroyos before we  came to where Fort Union lay patterned in black against a snowy background.  How glad we were to see its tall stockade before us.  It looked like a great black city within a high stockade.  Yet Fort Union had been established only the year before, in 1851.
Fort Union was built in the form of a square.  The officers quarters were constructed of logs, adobe and stone.  They were arranged on the east and west sides of the square.  The barracks were of adobe and were at the rear of the officers' quarters.  The store buildings and the stables were on the north side and they, too, were of adobe.
After a time when the mules were rested, we struck the westward trail again for there were supplies to be delivered at Santa Fe and gold to be dug at Sutter's Fort in California.  We left Fort Union on a cold December morning.  Sitting well-bundled on the seat beside mother I saw the long white trail of our wagons wiggling along ahead of and behind us.  The frozen ground rang beneath the wheels of our wagons.  The sounds of children's voices were like Alpine bells ringing.
I am glad today that I did not know that December morning what lay before us.  We who walk life's highway are really very stupid.  We know so much about philosophy and politics, but of whence we came and whither we go, we know nothing.  Perhaps it is better, for God in His infinite kindness keeps the rainbow to guide us. 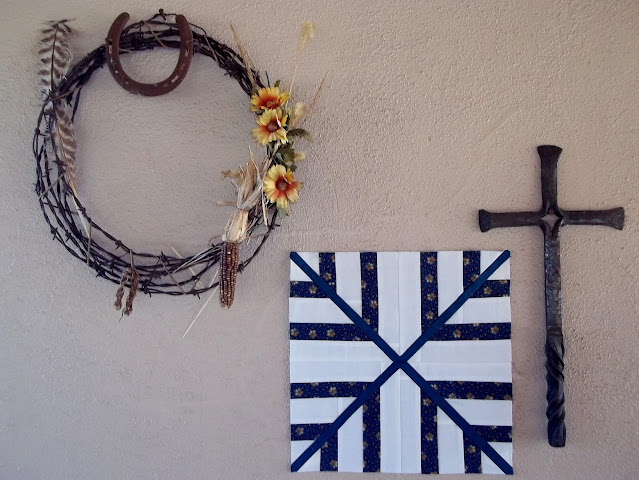 This block, resembling a snowflake, inspired by the snow that Marian's caravan encountered on the trail, is based on a log block, cut once on the diagonal, and is slightly oversized to ensure that the finished size of 12-1/2" is easily achieved. 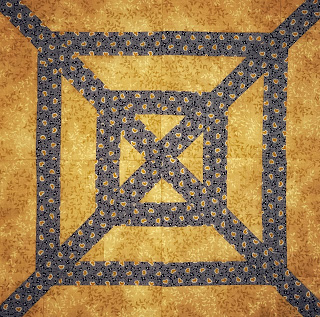 If you flip the quarter-blocks so that the starting squares are to the center, you end up with a layout that resembles a spider web...  Gina Koston discovered this when testing the pattern.  So I share this variation of the snowflake... as well as another short story.

"Soon we were on the Cimarron Cut-off and were building our cooking fires with buffalo chips.  My chore was to gather the buffalo chips.  I would stand back and kick them, then reach down and gather them carefully, for under them lived big spiders and centipedes.  Sometimes scorpions ran from beneath them.  I would fill my long full dress skirt with the evening’s fuel and take it back to mother.

It was on this trip that I made my first acquaintance with the big hairy spider called a tarantula.  They lived in holes in the ground.  When we found such a hole we would stomp on the ground close beside it and say, “Tarantula, tarantula!  Come out! Come out.  Tell us what it is all about.”  And sure enough they would come out walking on long stilt-like legs.  As a reward for having obeyed we would kill them."  😨

Will you be making a block to look like a snowflake or a spider web?
Leave a comment... you know I love the conversation.  By the way, while it may appear that I don't reply to comments left here on the blog for all to see, but I do reply privately, via e-mail, if your e-mail address is offered.  If you are a "no-reply" or anonymous reader and ask a question, I will always answer here on the blog.  You may want to check back to see if I did answer you.
I know that many of you have been waiting to get the fabric requirement for the quilt... Here you go.
Pieces of the Santa Fe Trail Fabric Requirements:
*12 fat quarters, plus a yard of unbleached muslin to piece the blocks for piecing the blocks
*1 additional FQ for cornerstones
*1 yard for sashing strips
*1/3 yard unbleached muslin – I had enough from my original 1 yard
*1/2 yard blue border
*Scrappy border – I used the remnants of the 12 FQ or the blocks
*Binding – 1/2 yard for a 1 color binding
In summary, I worked with 12 FQ, 1 yard unbleached muslin, a total of 3 yards of a neutral print fabric for the sashing strips and backing and 2 yards of a bright blue for a border and backing.  I pieced the backing to make it work.
I purchased my fabric for this quilt from Two Bees Fabric and they are offering a special discount of 10% if you use the coupon code Santafe620.  It is a small business, so please be patient if there is a delay with your orders, it can take some time for one person to pull, cut and ship all the orders.  But, rest assured, the wait is well worth it!
Quilt Happy!
Melva
Don't forget to use the hashtags #PiecesoftheSantaFeTrail #PiecesoftheTrail #PiecesoftheTrailSewAlong and tag me on instagram @MelvaLovesScraps or share to my fb page Melva Loves Scraps
Be sure to come back and link up your block for a chance to win a fat quarter too!  If you don't have a blog or social media account, you can email me at MelvaLovesScraps@NolanQualityCustoms.com with pictures of your blocks and I will share your blocks and link you up for the chance to win!
Linking with:
BOMs Away at What A Hoot Quilts
Oh Scrap! at Quilting is More Fun Than Housework
Sunday Stash at QuiltPaintCreate
Patchwork & Quilts at The Quilting Patch
Can I Get A Whoop Whoop at Confessions of a Fabric Addict
Off The Wall Friday with Nina Marie
Brag About Your Beauties at From Bolt to Beauty
Peacock Party at Wendy’s Quilts and More
Friday Foto Fun at Powered by Quilting
Finished or Not Friday at Alycia Quilts
Scrap Happy Saturday at Super Scrappy
UFO Busting at Tish’s Wonderland
Monday Making at Love Laugh Quilt
Design Wall Monday at Small Quilts and Doll Quilts

Email ThisBlogThis!Share to TwitterShare to FacebookShare to Pinterest
Labels: Pieces of the Trail