Pieces From The Past - The Pine Burr Quilt Block 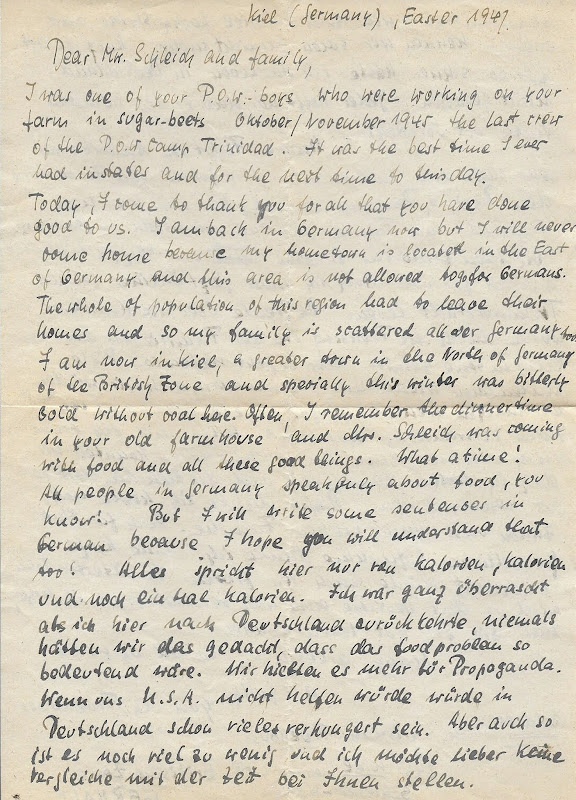 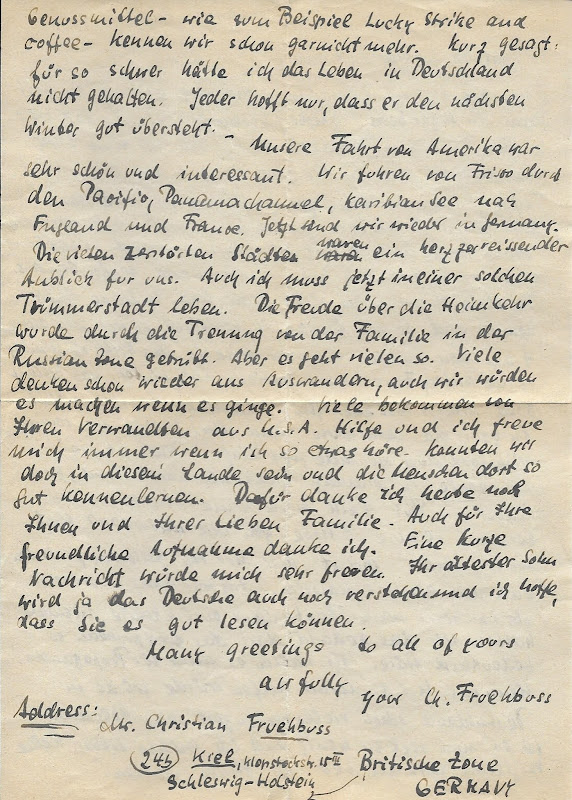 Today's letter is from Mr. Christian Fruehbuss, a mixture of both the English and German language was written on Easter Sunday of 1947 - April 7th.  The same date as the previous letter from Rudolf Kasulke, whose letter was censored... yet, Mr. Fruehbuss' was not.  Perhaps they were mailed from different "zones", such as the British Zone (as noted in the address above) and the Russian Zone as referred to in the Kasulke letter or the American Zone as noted in Alfred ??chala's letter.  But then again, according to the postmark on the envelope the letter was not mailed for another 10 days... 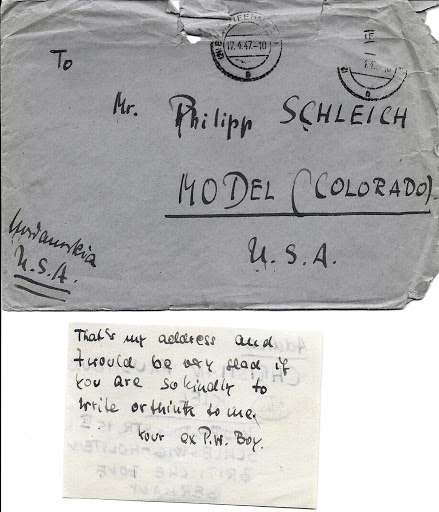 Kiel Germany
Easter, 1947
Dear Mr. Schleich and family,
I was one of your P.O.W. boys who were working on your farm in sugar-beets October/November 1945 the last year of the P.O.W. Camp Trinidad.  It was the best time I ever had in the States and for the next time to this day.
Today, I come to thank you for all that you have done good to us.  I am back in Germany now but I will never come home because my hometown is located in the East of Germany and this area is not allowed to go for Germans.  The whole of population of this region had to leave their homes and so my family is scattered all over Germany too.  I am now in Kiel, a greater town in the North of Germany of the British Zone and specially this winter was bitterly cold without coal here.  Often, I remember the dinnertime in your old farm house and Mrs. Schleich was coming with food and all these good things.  What a time!  All people in Germany speak only about food, you know!
But I will write some sentences in German because I hope you will understand that too!
Everyone speaks here of calories, calories and yet again calories.  I was very surprised when I returned back to Germany.  We never knew that the food problem was so serious.  We considered it more as propaganda.  If the USA won’t help us, then in Germany many will be starving.   And so it is still much too little and I would prefer not to make any comparison to the time at your place.
Luxury goods – for example Lucky Strike and coffee – we know nothing about them anymore.  In short, I would never have thought that life in Germany could be so difficult.  Each person only hopes that he will survive the next winter.
Our trip from America was very nice and interesting.  We left from Frisco (San Francisco) through the Pacific, the Panama Canal, the Caribbean, toward England and France.  Now we are again in Germany.  The many destroyed cities were a heartbreaking sight for us. And now I have to live in just such a wrecked city.  The joy of returning home was driven away by the separation from family in the Russian zone.  But it is like this for many people.  Many people are already thinking of emigrating, and we would do it too if we could.    Many people receive help from their relatives in the USA and I am always pleased whenever I hear such stories.  [I had trouble with the next sentence.]  ?We? knew ? to be in that Land and got to know the men there very well.    For that still today I thank you and your dear family.  I also thank you for your kind reception.  A short letter would please me very much.  Your oldest son also understands German already and I hope that that he can read it well.
Many greetings to all of yours
Your Ch. Fruehbuss
Did you notice the small note with the envelope?  he wrote his address on the reverse side... again.  His address is included at the end of the letter as well as on the back of the envelope.  I am touched at how he signed it "Your ex PW Boy".
He was not the only one to lay claim to the Schleich family... there have been others that wrote using the same phrase.  Another indication that the men that worked at my Grandparents' farm were treated as family and felt not only safe there, but also welcome and comfortable.
I can only guess that the men were longing for, and recalling, a feeling of comfort and belonging as they penned the letters on Easter.
Even Eleanor Roosevelt wrote of April 7th, "This is Easter Sunday, a day of hope and rejoicing, the day on which our Lord, Jesus Christ, took away some of the fear in the hearts of His followers. We will go to church today all over the United States and listen to the Easter services, and I, for one, will hope that in countries less fortunate than ours there are people who at this season will gather spiritual strength and hope. As the earth comes to life again, we hope people who have suffered will feel renewed vigor both of body and soul. In this country, our problems are the problems of confidence. We need to realize that we are strong and can afford to trust other people. After every war there seems to be a kind of hysteria which comes from a fear that sweeps over us. We are very lucky that we have some leaders among us whose voices can be heard, reassuringly calling us back to trust in God and in ourselves and go forward without fear.
One of the special foods that were a part of the Schleich family tradition for Easter, I am told by my Mom, was Fruit Soup.  She shared with me one memory, the only memory of being served fruit soup, and going to Aunt Clara's for an Easter dinner when this unusual soup served... something Dad had looked forward to (ok, who are we kidding? Dad looked forward to every meal!)... but Mom was left unimpressed. LOL!
There are several recipes in the Germans from Russia cookbook that I have. They call for dried fruit such as dried apples, pears, peaches and raisins, which makes sense because fresh fruit would not have been available in abundance in early spring.  Most of the recipes call for milk or cream to be added before serving.  One recipe even includes beef chuck or beef stew meat and egg dumplings.  From just reading the recipes I can understand why Mom wasn't impressed.  It all seems a strange combination. 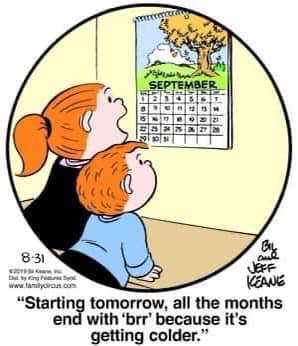 Mr. Fruehbuss wrote of hoping to survive the next winter which leads me to the reason for choosing the Pine Burr block as the Kansas City Star pattern to accompany this letter.
The Family Circus children seem to understand that as well. 😉
The Pine Burr block is another challenging block that is foundation paper pieced and will measure 15-1/2" square when completed. 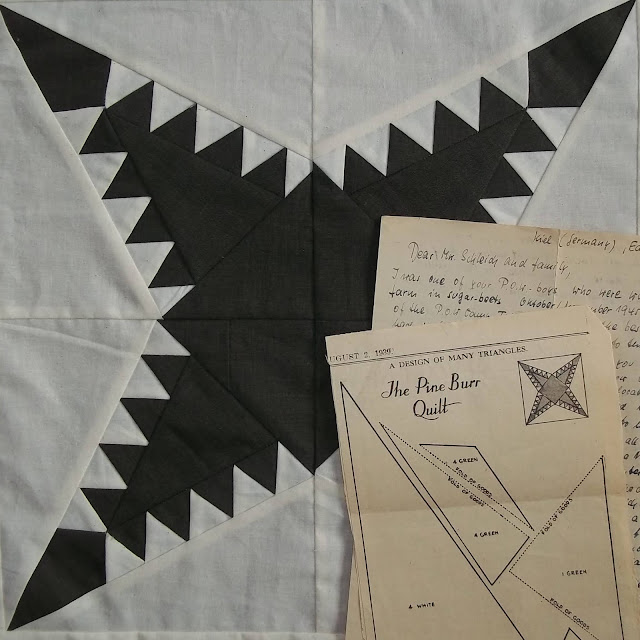 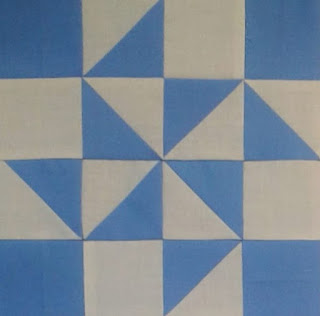 Never fear!  I have an easy, beginner friendly block for you if you don't feel up to the challenge...  The X Quartette block.  I have a few options for you.  I have given cutting instructions to make it a single 16-1/2" block or you can choose to make four 8-1/2" blocks to create the 16-1/2" block.
Here are a couple examples... one is mine, the other was from my testers. 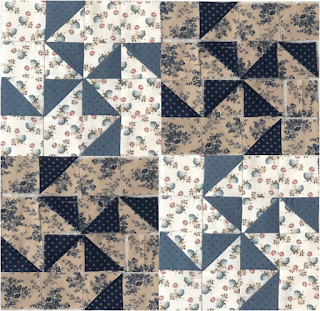 Here is one that Stacey started, but ran short of fabric... using a photo editing program I was able to "complete" her block.  I really like the look of this one.
Now go grab your patterns and get started.  When you have your block finished remember to come back here and link up for your chance to win a free fat quarter.
And, like all of the other most difficult blocks, if you link up a completed Pine Burr block, you will have two entries into the drawing.
Don't forget to tag me on instagram @MelvaLovesScraps and use the hashtag #PiecesFromThePastSewAlong or share on my facebook page - Melva Loves Scraps
And now, with the completion of block #12 you now have enough large blocks to complete row number 4 of the quilt!  You will need 3 yards of background fabric.
You will need blocks #5 (Our Country), #7 (Modern Broken Dish) and #12 (Pine Burr or X Quartette).  Begin by adding a "frame" on the blocks to enlarge and make all three 16-1/2".  If you made the X Quartette, it should already be the proper size.  On block #5, Our Country, I added a one inch strip to only two sides (a side and bottom), and a one inch strip to all four sides of the Pine Burr and Modern Broken Dish blocks.  If your blocks aren't quite the right size, this is where you can make up the discrepancy.
Cut two 3-1/2" x 16-1/2" strips.  Sew one strip to each side of the center block and add the other two blocks to either side.  To help with block placement here is a photo of the finished quilt layout. 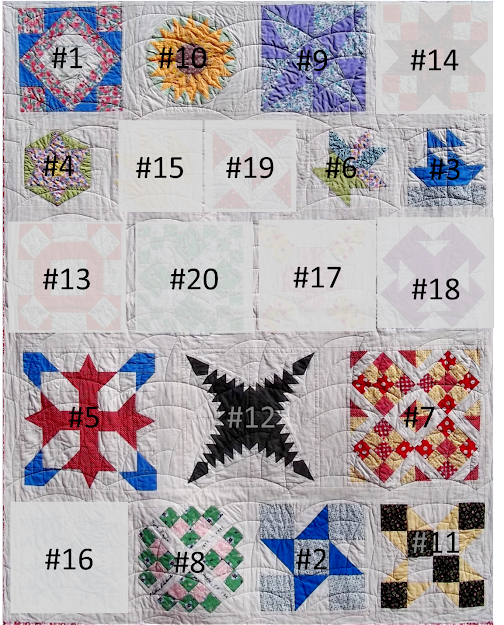 Looking for the rest of the patterns?
You can find links for them on the Pieces From The Past Sew Along Announcement page.
Linking with:
BOMs Away at What A Hoot Quilts
Put Your Foot Down at For the Love of Geese
Needle & Thread Thursday at My Quilt Infatuation
Creative Compulsions at Bijou Bead Boutique
Can I Get A Whoop Whoop at Confessions of a Fabric Addict
Off The Wall Friday with Nina Marie
Brag About Your Beauties at From Bolt to Beauty
Peacock Party at Wendy’s Quilts and More
Friday Foto Fun at Powered by Quilting
Finished or Not Friday at Alycia Quilts
UFO Busting at Tish’s Wonderland
Oh Scrap! at Quilting is More Fun Than Housework
Sunday Stash at QuiltPaintCreate
Patchwork & Quilts at The Quilting Patch
What I Made Monday at Pretty Piney
Monday Making at Love Laugh Quilt
Design Wall Monday at Small Quilts and Doll Quilts
Colour & Inspiration at Clever Chameleon Quilting
Posted by Melva at 12:00 AM